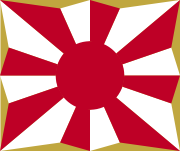 The is the military
Military
A military is an organization authorized by its greater society to use lethal force, usually including use of weapons, in defending its country by combating actual or perceived threats. The military may have additional functions of use to its greater society, such as advancing a political agenda e.g...
flag of Japan
Japan
Japan is an island nation in East Asia. Located in the Pacific Ocean, it lies to the east of the Sea of Japan, China, North Korea, South Korea and Russia, stretching from the Sea of Okhotsk in the north to the East China Sea and Taiwan in the south...
. It was used as the war flag
War flag
A war flag is a variant of a national flag for use by the nation's military forces on land. The nautical equivalent is a naval ensign — the battle ensign...
of the Imperial Japanese Army
Imperial Japanese Army
-Foundation:During the Meiji Restoration, the military forces loyal to the Emperor were samurai drawn primarily from the loyalist feudal domains of Satsuma and Chōshū...
and the ensign
Ensign
An ensign is a national flag when used at sea, in vexillology, or a distinguishing token, emblem, or badge, such as a symbol of office in heraldry...
of the Imperial Japanese Navy
Imperial Japanese Navy
The Imperial Japanese Navy was the navy of the Empire of Japan from 1869 until 1947, when it was dissolved following Japan's constitutional renunciation of the use of force as a means of settling international disputes...
until the end of World War II
World War II
World War II, or the Second World War , was a global conflict lasting from 1939 to 1945, involving most of the world's nations—including all of the great powers—eventually forming two opposing military alliances: the Allies and the Axis...
. As it was heavily used during the colonization of East Asia in the first-half of the 20th century, it is seen offensive to countries that were under control of Japan at that time, especially because of the war crimes
Japanese war crimes
Japanese war crimes occurred during the period of Japanese imperialism, primarily during the Second Sino-Japanese War and World War II. Some of the incidents have also been described as an Asian Holocaust and Japanese war atrocities...
they performed. The design is incorporated into the flag of the Japanese newspaper Asahi Shimbun
Asahi Shimbun
The is the second most circulated out of the five national newspapers in Japan. Its circulation, which was 7.96 million for its morning edition and 3.1 million for its evening edition as of June 2010, was second behind that of Yomiuri Shimbun...
as well as banners called Tairyō-ki (大漁旗, Good Catch Flag?) flown by fishermen.

The design is similar to the flag of Japan
Flag of Japan
The national flag of Japan is a white rectangular flag with a large red disk in the center. This flag is officially called in Japanese, but is more commonly known as ....
in that it has a red circle close to the middle signifying the sun, the difference being the addition of extra sun rays (16 for the ensign) exemplifying the name of Japan as "The Land of the Rising Sun
Names of Japan
There are many names of Japan in the English, Japanese, and other languages. The word "Japan" is an exonym, and is used by a large number of languages. The Japanese names for Japan are Nippon and Nihon . They are both written in Japanese using the kanji 日本...
". The Imperial Japanese Army first adopted the Rising Sun Flag in 1870. The Imperial Japanese Army
Imperial Japanese Army
-Foundation:During the Meiji Restoration, the military forces loyal to the Emperor were samurai drawn primarily from the loyalist feudal domains of Satsuma and Chōshū...
and the Imperial Japanese Navy
Imperial Japanese Navy
The Imperial Japanese Navy was the navy of the Empire of Japan from 1869 until 1947, when it was dissolved following Japan's constitutional renunciation of the use of force as a means of settling international disputes...
both had a version of the flag; the naval ensign was off-set, with the red sun closer to the lanyard
Lanyard
A lanyard is a rope or cord exclusively worn around the neck or wrist to carry something. Usually it is used where there is a risk of losing the object or to ensure it is visible at all times. Aboard a ship, it may refer to a piece of rigging used to secure objects...
side, while the army's version (which was part of the regimental colors) was centered. It was adopted in 1889. The flag was used in overseas actions from the Meiji period
Meiji period
The , also known as the Meiji era, is a Japanese era which extended from September 1868 through July 1912. This period represents the first half of the Empire of Japan.- Meiji Restoration and the emperor :...
to World War II
World War II
World War II, or the Second World War , was a global conflict lasting from 1939 to 1945, involving most of the world's nations—including all of the great powers—eventually forming two opposing military alliances: the Allies and the Axis...
. When Japan was defeated in August 1945, the flag was banned by Allied Occupation authorities. However with the re-establishment of a Self-Defense Force the flag was re-adopted in 1954. The flag with 16 rays is today the ensign of the Maritime Self-Defense Force
Japan Maritime Self-Defense Force
The , or JMSDF, is the naval branch of the Japan Self-Defense Forces, tasked with the naval defense of Japan. It was formed following the dissolution of the Imperial Japanese Navy after World War II....
while the Ground Self-Defense Force
Japan Ground Self-Defense Force
The , or JGSDF, is the army of Japan. The largest of the three services of the Japan Self-Defense Forces, the Ground Self-Defense Force operates under the command of the chief of the ground staff, based in the city of Ichigaya, Tokyo. The present chief of ground staff is General Yoshifumi Hibako...
uses an 8-ray version.

This flag is considered offensive in East Asian countries, specifically in China
China
Chinese civilization may refer to:* China for more general discussion of the country.* Chinese culture* Greater China, the transnational community of ethnic Chinese.* History of China* Sinosphere, the area historically affected by Chinese culture...
and the Koreas,, as it is considered to be associated with Japanese militarism
Japanese militarism
refers to the ideology in the Empire of Japan that militarism should dominate the political and social life of the nation, and that the strength of the military is equal to the strength of a nation.-Rise of militarism :...
and Japanese imperialism
Imperialism
Imperialism, as defined by Dictionary of Human Geography, is "the creation and/or maintenance of an unequal economic, cultural, and territorial relationships, usually between states and often in the form of an empire, based on domination and subordination." The imperialism of the last 500 years,...
during World War II. It is sometimes seen at sporting events and protests by right-wing groups
Uyoku dantai
Uyoku dantai are Japanese nationalist right-wing groups.In 1996, the National Police Agency estimated that there are over 1000 right wing groups in Japan with about 100,000 members in total.-Tennō period:...
.