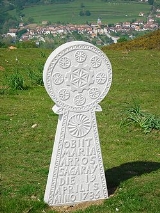 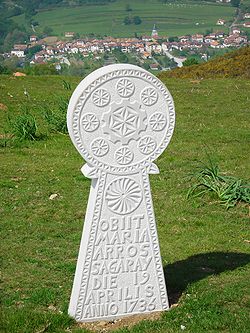 The mythology
Mythology
The term mythology can refer either to the study of myths, or to a body or collection of myths. As examples, comparative mythology is the study of connections between myths from different cultures, whereas Greek mythology is the body of myths from ancient Greece...
of the ancient Basques
Basque people
The Basques as an ethnic group, primarily inhabit an area traditionally known as the Basque Country , a region that is located around the western end of the Pyrenees on the coast of the Bay of Biscay and straddles parts of north-central Spain and south-western France.The Basques are known in the...
largely did not survive the, albeit late, arrival of Christianity
Christianity
Christianity is a monotheistic religion based on the life and teachings of Jesus as presented in canonical gospels and other New Testament writings...
in the Basque Country
Basque Country (historical territory)
The Basque Country is the name given to the home of the Basque people in the western Pyrenees that spans the border between France and Spain on the Atlantic coast....
between the 4th and 12th century AD. Most of what is known about elements of this original belief system is based on the analysis of legends, the study of place names
Toponymy
Toponymy is the scientific study of place names , their origins, meanings, use and typology. The word "toponymy" is derived from the Greek words tópos and ónoma . Toponymy is itself a branch of onomastics, the study of names of all kinds...
and scant historical references to pagan rituals practised by the Basques.

One main figure of this belief system was the female character of Mari
Mari (goddess)
Mari, Mari Urraca, Anbotoko Mari and the possibly distinct Murumendiko Dama was a goddess — a lamia — of the Basques. She was married to the god Sugaar...
. According to legends collected in the area of Ataun
Ataun
Ataun is a town located at the foot of the Aralar Range in the Goierri region of the province of Gipuzkoa, in the autonomous community of the Basque Country, northern Spain.-External links:* *...
, the other main figure was her consort Sugaar
Sugaar
In Basque mythology, Sugaar is the male half of a pre-Christian Basque deity associated with storms and thunder. He is normally imagined as a dragon or serpent. Unlike his female consort, Mari, there are very few remaining legends about Sugaar...
. However, due to the scarcity of the material it is difficult to say if this would have been the "central pair" of the Basque pantheon
Pantheon (gods)
A pantheon is a set of all the gods of a particular polytheistic religion or mythology.Max Weber's 1922 opus, Economy and Society discusses the link between a...
. Based on the attributes ascribed to these mythological creatures, this would be considered a chthonic
Chthonic
Chthonic designates, or pertains to, deities or spirits of the underworld, especially in relation to Greek religion. The Greek word khthon is one of several for "earth"; it typically refers to the interior of the soil, rather than the living surface of the land or the land as territory...
religion as all its characters dwell on earth or below it, with the sky seen mostly as an empty corridor through which the divinities pass.


Christianity in the Basque Country

The Christianization of the Basque Country has been the topic of some discussion. Broadly speaking there are two views: either Christianity
Christianity
Christianity is a monotheistic religion based on the life and teachings of Jesus as presented in canonical gospels and other New Testament writings...
arrived in the Basque Country during the 4th and 5th century, or this did not occur until the 12th and 13th century. The main issue lies in the different interpretations of what is considered Christianization. Early traces of Christianity can be found in the major urban areas from the 4th century onwards, a bishopric
Diocese
A diocese is the district or see under the supervision of a bishop. It is divided into parishes.An archdiocese is more significant than a diocese. An archdiocese is presided over by an archbishop whose see may have or had importance due to size or historical significance...
from 589 in Pamplona
Pamplona
Pamplona is the historial capital city of Navarre, in Spain, and of the former kingdom of Navarre.The city is famous worldwide for the San Fermín festival, from July 6 to 14, in which the running of the bulls is one of the main attractions...
and three hermit cave concentrations (two in Álava
Álava
Álava is a province of Spain and a historical territory of the Basque Country, heir of the ancient Lord of Álava. Its capital city is Vitoria-Gasteiz which is also the capital of the autonomous community...
, one in Navarre
Navarre
Navarre , officially the Chartered Community of Navarre is an autonomous community in northern Spain, bordering the Basque Country, La Rioja, and Aragon in Spain and Aquitaine in France...
) were in use from the 6th century onwards. In this sense, Christianity arrived "early".

At the same time, various historical sources and research directly or indirectly bear witness to the fact that large-scale conversion did not begin to take place until the 10th and 11th century:

Most Vasconists broadly agree that Christianity thus arrived some time in the 4th/5th century. Serious missionary and religious activity only began in the 9th century from the kingdom of Asturias
Asturias
The Principality of Asturias is an autonomous community of the Kingdom of Spain, coextensive with the former Kingdom of Asturias in the Middle Ages...
and Franks
Franks
The Franks were a confederation of Germanic tribes first attested in the third century AD as living north and east of the Lower Rhine River. From the third to fifth centuries some Franks raided Roman territory while other Franks joined the Roman troops in Gaul. Only the Salian Franks formed a...
, and continued after the Reconquista
Reconquista
The Reconquista was a period of almost 800 years in the Middle Ages during which several Christian kingdoms succeeded in retaking the Muslim-controlled areas of the Iberian Peninsula broadly known as Al-Andalus...
with famous monastic foundations (Monastery of Leyre
Monastery of Leyre
The Monastery of San Salvador of Leyre is a religious complex at the south of the Sierra of Leyre, in northern Navarre, Spain, standing out as one of the most important historical monasteries of Spain. The oldest records of the site date from 842, when Íñigo Arista, held as first king of Pamplona,...
, San Millán de la Cogolla
San Millán de la Cogolla, La Rioja
San Millán de la Cogolla is a sparsely populated municipality in La Rioja, . It takes its name from a 6th-century saint who lived here, and from the shape of the surrounding mountains . The village is famous for its twin monasteries, Yuso and Suso, which were declared a World Heritage Site in 1997...
) and the diocese of Bayonne in the 11th century. Thus Christian and non-Christian beliefs lived side by side past the 10th and 11th century. Various traditions connected to this ancient belief system have survived partly by adapting a Christian veneer or by turning into folk traditions, as happened elsewhere in Europe.

However, in spite of the process of Christianization being completed late, the process was thorough and very little direct evidence remains of pre-Christian beliefs. For this reason research into the matter tends to be putative as it has to rely on the analysis of folklore, folk traditions, sketchy references and place-name evidence.

The main sources for information about non-Christian Basque beliefs are: 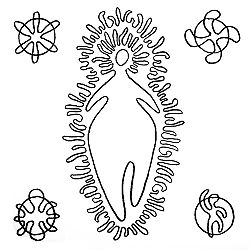 Urtzi may or may not have been a Basque mythological figure. There is evidence that can be read as either supporting or contradicting the existence of such a deity. To date neither theory has been able to convince fully.


Myths of the historical period