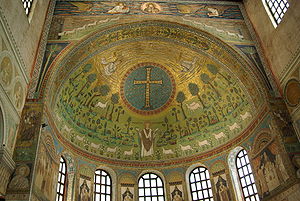 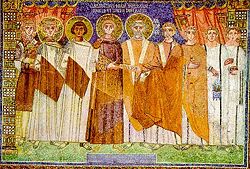 The Basilica of Sant' Apollinare in Classe is an important monument of Byzantine art
Byzantine art
Byzantine art is the term commonly used to describe the artistic products of the Byzantine Empire from about the 5th century until the Fall of Constantinople in 1453....
near Ravenna
Ravenna
Ravenna is the capital city of the Province of Ravenna in the Emilia-Romagna region of Italy and the second largest comune in Italy by land area, although, at , it is little more than half the size of the largest comune, Rome...
, Italy
Italy
Italy , officially the Italian Republic languages]] under the European Charter for Regional or Minority Languages. In each of these, Italy's official name is as follows:;;;;;;;;), is a unitary parliamentary republic in South-Central Europe. To the north it borders France, Switzerland, Austria and...
. When the UNESCO
UNESCO
The United Nations Educational, Scientific and Cultural Organization is a specialized agency of the United Nations...
inscribed eight Ravenna sites on the World Heritage List, it cited this basilica as "an outstanding example of the early Christian basilica in its purity and simplicity of its design and use of space and in the sumptuous nature of its decoration".

The imposing brick structure was erected at the beginning of 6th century by order of Bishop
Bishop
A bishop is an ordained or consecrated member of the Christian clergy who is generally entrusted with a position of authority and oversight. Within the Catholic Church, Eastern Orthodox, Oriental Orthodox Churches, in the Assyrian Church of the East, in the Independent Catholic Churches, and in the...
Ursicinus
Ursicinus (Bishop of Ravenna)
Ursicinus is a saint of the Catholic Church and was archbishop of Ravenna from 533 to 536. He is not to be confused with the 1st century saint Ursicinus of Ravenna....
, using money from the Greek banker Iulianus Argentarius. It was certainly located next to a Christian cemetery, and quite possibly on top of a pre-existing pagan one, as some of the ancient tombstones were re-used in its construction.

The exterior has a large façade with two simple uprights and one mullioned window with three openings. The narthex
Narthex
The narthex of a church is the entrance or lobby area, located at the end of the nave, at the far end from the church's main altar. Traditionally the narthex was a part of the church building, but was not considered part of the church proper...
and building to the right of the entry are later additions, as is the fine 9th century round bell tower
Bell tower
A bell tower is a tower which contains one or more bells, or which is designed to hold bells, even if it has none. In the European tradition, such a tower most commonly serves as part of a church and contains church bells. When attached to a city hall or other civic building, especially in...
with mullioned windows.

The church is on a nave and two aisles. An ancient altar in the mid of the nave covers the place of the saint's martyrdom. The church ends with a polygonal apse, sided by two chapels with apses.

The nave contains 24 columns of Greek marble
Marble
Marble is a metamorphic rock composed of recrystallized carbonate minerals, most commonly calcite or dolomite.Geologists use the term "marble" to refer to metamorphosed limestone; however stonemasons use the term more broadly to encompass unmetamorphosed limestone.Marble is commonly used for...
. The carved capitals of the columns depict acanthus leaves, but unlike most such carvings the leaves appear twisted as if being buffeted by the wind. The faded fresco
Fresco
Fresco is any of several related mural painting types, executed on plaster on walls or ceilings. The word fresco comes from the Greek word affresca which derives from the Latin word for "fresh". Frescoes first developed in the ancient world and continued to be popular through the Renaissance...
s depict some of the archbishop
Archbishop
An archbishop is a bishop of higher rank, but not of higher sacramental order above that of the three orders of deacon, priest , and bishop...
s of Ravenna, and date to the 18th century. The lateral walls are bare, but were certainly once covered with gorgeous mosaics. These were likely demolished by the Venetians
Republic of Venice
The Republic of Venice or Venetian Republic was a state originating from the city of Venice in Northeastern Italy. It existed for over a millennium, from the late 7th century until 1797. It was formally known as the Most Serene Republic of Venice and is often referred to as La Serenissima, in...
in 1449, although they left the mosaic decoration in the apse and on the, triumphal arch
Triumphal arch
A triumphal arch is a monumental structure in the shape of an archway with one or more arched passageways, often designed to span a road. In its simplest form a triumphal arch consists of two massive piers connected by an arch, crowned with a flat entablature or attic on which a statue might be...
, the church's most striking features.

The upper section of the triumphal arch depicts, inside a medallion, Christ. At the sides, within a sea of clouds, are the winged symbols of the four Evangelists: the Eagle (John), the Winged Man (Matthew), the Lion (Mark), the Calf (Luke). The lower section has, at its two edges, depictions of the two cities of Jerusalem and Bethlehem, the walls showing precious gems from which twelve lambs (symbols of the Twelve Apostles) exit. The sides of the arch show two palms which, in the Bible's symbolism, represent justice; under them are the archangels Michael and Gabriel, with the bust of St. Matthew and another unidentified saint.

The decoration of the apse date to the 6th century, and can be divided into two parts:


In the spaces between the windows are the four bishops who founded the main basilicas in Ravenna: Ursicinus, Ursus, Severus and Ecclesius, all with a book in a hand. At the sides of the apse are two 7th century panels: the left one, which has been much restored, portrays the Byzantine Emperor Constantine IV
Constantine IV
Constantine IV , , sometimes incorrectly called Pogonatos, "the Bearded", by confusion with his father; was Byzantine emperor from 668 to 685...
granting privileges to an envoy of the Ravenna's archbishop. In the right panel are Abraham, Abel and Melchisedec around an altar, on which they offer a sacrifice to God.

The choice of the subject is closely linked to the fight against Arianism
Arianism
Arianism is the theological teaching attributed to Arius , a Christian presbyter from Alexandria, Egypt, concerning the relationship of the entities of the Trinity and the precise nature of the Son of God as being a subordinate entity to God the Father...
, as it restates the both divine and human nature of Christ, the latter negated by the arians. In addition, the representation of Apollinaris among the apostles was a legitimation to Maximian as the first bishop of a diocese directly related to the early followers of Jesus, being Apollinaris, according to the legend, a disciple of St. Peter.

The Basilica's walls are lined by numerous sarcophagi
Sarcophagus
A sarcophagus is a funeral receptacle for a corpse, most commonly carved or cut from stone. The word "sarcophagus" comes from the Greek σαρξ sarx meaning "flesh", and φαγειν phagein meaning "to eat", hence sarkophagus means "flesh-eating"; from the phrase lithos sarkophagos...
from different centuries. They attest the changes of style from V to VIII century: from reliefs with human figures of the roman sarcophagi, to Byzantine symbolism, to the increasing abstraction and simplification of these symbologies.