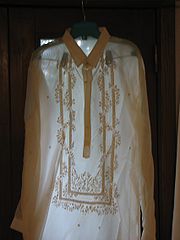 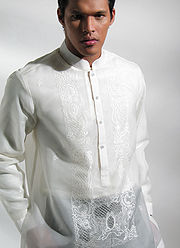 The barong Tagalog is an embroidered formal garment of the Philippines
Philippines
The Philippines , officially known as the Republic of the Philippines , is a country in Southeast Asia in the western Pacific Ocean. To its north across the Luzon Strait lies Taiwan. West across the South China Sea sits Vietnam...
. It is very lightweight and worn untucked (similar to a coat
Coat (clothing)
A coat is a long garment worn by both men and women, for warmth or fashion. Coats typically have long sleeves and are open down the front, closing by means of buttons, zippers, hook-and-loop fasteners, toggles, a belt, or a combination of some of these...
/dress shirt
Dress shirt
A shirt, or dress shirt in American English, is a garment with a collar, a full-length opening at the front from the collar to the hem, and sleeves with cuffs. Shirts are predominantly used by men, since women usually wear blouses...
), over an undershirt. In Filipino culture it is a common wedding and formal attire, mostly for men but also for women. The term "barong Tagalog" literally means "a Tagalog
Tagalog people
The Tagalog people are an ethnic group in the Philippines. The name Tagalog comes from either the native term tagá-ilog, meaning 'people living along the river', or another native term, tagá-alog, meaning 'people living along the ford', a ford being a shallow part of a river or stream where people,...
dress" in the Tagalog language
Tagalog language
Tagalog is an Austronesian language spoken as a first language by a third of the population of the Philippines and as a second language by most of the rest. It is the first language of the Philippine region IV and of Metro Manila...
; however, the word "Tagalog" in the garment's name refers to the Tagalog region, not the region's language of the same name.

Long before the Spaniards arrived in the Philippines, the Tagalog people on Luzon Island already wore a dress that can be seen as the origin of the barong Tagalog. The dress reached slightly below the waist, was colourless and had an opening in the front.

A legend persists that the Spaniards made Filipinos wear their barong untucked to distinguish them from the ruling class; its translucent fabric allegedly helped the Spaniards to see that the wearer was not bearing any weapon under the garment.
During the Spanish era, rulers required that the native dress of the Filipinos be made of flimsy material to eliminate any possibility of concealed weapons. Supposedly, the native Filipinos were also prohibited from tucking in their shirts, which served to designate their low rank as well as to distinguish them from the people of mixed descent, the mestizaje, and the islanders, or insulares.

Sociologists have argued against this theory, however, pointing out that untucked wear was very common in pre-colonial southeast- and south-Asian countries, and that the use of thin, translucent fabric developed naturally given the heat and humidity of the Philippines. Historians, likewise, have noted the absence of a citation to the specific law in which the Spaniards supposedly prohibited the natives from tucking in their shirts. They also note that natives during the Spanish era wore their shirts tucked at times. A common example cited in support of this argument is José Rizal
José Rizal
José Protacio Rizal Mercado y Alonso Realonda , was a Filipino polymath, patriot and the most prominent advocate for reform in the Philippines during the Spanish colonial era. He is regarded as the foremost Filipino patriot and is listed as one of the national heroes of the Philippines by...
and his contemporaries, who were photographed in western clothing with their shirts tucked—although the era of the barong predated Rizal's time.

Another disputed theory is whether the barong was a local adaptation or a precursor to the guayabera
Guayabera
The guayabera is a men's shirt popular in Latin America, the Caribbean, Southeast Asia, Puerto Rico, the Philippines and Zimbabwe. It is also more recently known as a "Mexican Wedding Shirt."-History:...
, a shirt popular in Latin-American communities. According to those who claim that the barong is the precursor of the guayabera, the guayabera shirt was originally called the "Filipina" during the era of Manila galleon
Manila Galleon
The Manila galleons or Manila-Acapulco galleons were Spanish trading ships that sailed once or twice per year across the Pacific Ocean between Manila in the Philippines, and Acapulco, New Spain . The name changed reflecting the city that the ship was sailing from...
trade ships when it was brought to Mexico from the Philippines.

Filipinos don their finest formal barong in a variety of fabrics.

Piña
Piña
Piña is a pineapple fiber made from the leaves of a pineapple plant and is commonly used in the Philippines. It is sometimes combined with silk or polyester to create a textile fabric. Piña's name comes from the Spanish word piña which literally means pineapple.- Production methods :Since piña is...
fabric is hand-loomed from pineapple leaf fibers. Because piña weavers in the Philippines are dwindling, its scarcity makes the delicate piña cloth expensive and is thus used for very formal events.

Jusi fabric is mechanically woven and was once made from abacca or banana silk.

Banana fabric is another sheer fabric used in formal occasions. Made and hand woven from banana fiber, it usually comes with geometric design details. This fabric hails from the Visayas island of Negros.

The term barong Tagalog is used almost exclusively to refer to the formal version of the barong; however, less formal variations of this national costume also exist.