Encyclopedia
The life-size marble statue known as the Barberini Faun or Drunken Satyr is located in the Glyptothek
Glyptothek
The Glyptothek is a museum in Munich, Germany, which was commissioned by the Bavarian King Ludwig I to house his collection of Greek and Roman sculptures . It was designed by Leo von Klenze in the Neoclassical style, and built from 1816 to 1830...
in Munich, Germany. A Faun
Faun
The faun is a rustic forest god or place-spirit of Roman mythology often associated with Greek satyrs and the Greek god Pan.-Origins:...
is the Roman equivalent of a Greek Satyr
Satyr
In Greek mythology, satyrs are a troop of male companions of Pan and Dionysus — "satyresses" were a late invention of poets — that roamed the woods and mountains. In myths they are often associated with pipe-playing....
. In Greek mythology, satyrs were human-like male woodland spirits with several animal features, often a goat-like tail, hooves, ears, or horns. Satyrs attended Dionysus
Dionysus
Dionysus was the god of the grape harvest, winemaking and wine, of ritual madness and ecstasy in Greek mythology. His name in Linear B tablets shows he was worshipped from c. 1500—1100 BC by Mycenean Greeks: other traces of Dionysian-type cult have been found in ancient Minoan Crete...
.

The sculpture was either carved by an unknown Hellenistic sculptor of the Pergamene school, in the late third or early second century BCE or is a Roman copy of high quality, though its present form was given it by a series of restorers in Rome, ending with Vincenzo Pacetti
Vincenzo Pacetti
Vincenzo Pacetti was an Italian sculptor and restorer from Castel Bolognese, particularly active in collecting and freely restoring and completing classical sculptures such as the Barberini Faun — his most famous work— the Hope Dionysus and the Athena of Velletri and...
. The statue was found in the 1620s in the moat below the Castel Sant'Angelo
Castel Sant'Angelo
The Mausoleum of Hadrian, usually known as the Castel Sant'Angelo, is a towering cylindrical building in Parco Adriano, Rome, Italy. It was initially commissioned by the Roman Emperor Hadrian as a mausoleum for himself and his family...
, Rome, which in Antiquity had been Hadrian
Hadrian
Hadrian , was Roman Emperor from 117 to 138. He is best known for building Hadrian's Wall, which marked the northern limit of Roman Britain. In Rome, he re-built the Pantheon and constructed the Temple of Venus and Roma. In addition to being emperor, Hadrian was a humanist and was philhellene in...
’s Mausoleum. Work on the fortification was undertaken by the Barberini Pope Urban VIII
Pope Urban VIII
Pope Urban VIII , born Maffeo Barberini, was pope from 1623 to 1644. He was the last pope to expand the papal territory by force of arms, and was a prominent patron of the arts and reformer of Church missions...
in 1624. The sculpture made its first documented appearance in a receipt for its restoration, 6 June 1628, when it already belonged to the Pope's nephew, Cardinal Francesco Barberini
Francesco Barberini (seniore)
Francesco Barberini was an Italian Catholic Cardinal. The nephew of Pope Urban VIII , he benefited immensely from the nepotism practiced by his uncle...
. When discovered, the statue was heavily damaged; the right leg, parts of both hands, and parts of the head were missing. The historian Procopius
Procopius
Procopius of Caesarea was a prominent Byzantine scholar from Palestine. Accompanying the general Belisarius in the wars of the Emperor Justinian I, he became the principal historian of the 6th century, writing the Wars of Justinian, the Buildings of Justinian and the celebrated Secret History...
recorded that during the siege of Rome in 537 the defenders had hurled down upon the Goths
Goths
The Goths were an East Germanic tribe of Scandinavian origin whose two branches, the Visigoths and the Ostrogoths, played an important role in the fall of the Roman Empire and the emergence of Medieval Europe....
the statues adorning Hadrian's Mausoleum, and Johann Winckelmann speculated that the place of discovery and the statue's condition suggested that it had been such a projectile.

It was traditionally asserted that Cardinal Maffeo Barberini
Barberini
The Barberini are a family of the Italian nobility that rose to prominence in 17th century Rome. Their influence peaked with the election of Cardinal Maffeo Barberini to the papal throne in 1623, as Pope Urban VIII...
commissioned Gianlorenzo Bernini to restore the statue, "but there is no evidence for the tradition that Bernini was in any way involved with the statue," Francis Haskell and Nicholas Penny observed in 1981, after reviewing the documentation and literature. Restorations, at first in stucco, were remade in 1679 by Giuseppe Giorgetti
Giuseppe Giorgetti
Giuseppe Giorgetti was an Italian sculptor in Rome who worked first under his older brother Antonio Giorgetti and took over his workshop after Antonio died in late 1669...
and Lorenzo Ottoni
Lorenzo Ottoni
Lorenzo Ottoni was an Italian sculptor who was commissioned by the papacy and various noble houses of renaissance Italy.-Life:Ottoni was born in Rome in 1658 and spent the majority of his life in the city....
, who enabled the antique left leg to be reaffixed and provided the elaborate supporting structure that is illustrated in Paolo Alessandro Maffei's Raccolta di statue (1704); in the eighteenth century the right leg was again restored in marble, and once more by Pacetti in 1799. (The sculpture is shown today without the restored hanging left arm.)

The statue was housed in the Palazzo Barberini
Palazzo Barberini
Palazzo Barberini is a palace in Rome, facing the piazza of the same name in Rione Trevi and is home to the Galleria Nazionale d'Arte Antica.-History:...
, Rome, until it was sold in 1799 to the sculptor and restorer Vincenzo Pacetti
Vincenzo Pacetti
Vincenzo Pacetti was an Italian sculptor and restorer from Castel Bolognese, particularly active in collecting and freely restoring and completing classical sculptures such as the Barberini Faun — his most famous work— the Hope Dionysus and the Athena of Velletri and...
; Pacetti offered it to various English and French clients, including Lucien Bonaparte
Lucien Bonaparte
Lucien Bonaparte, Prince Français, 1st Prince of Canino and Musignano , born Luciano Buonaparte, was the third surviving son of Carlo Buonaparte and his wife Letizia Ramolino....
. The Barberini brought suit to annul the sale and eventually sold the Faun, after much public competition and a ban on its exportation, strongly supported by the antiquarian Carlo Fea
Carlo Fea
Carlo Fea was an Italian archaeologist.Born at Pigna, in what is now Liguria, Fea studied law in Rome, receiving the degree of doctor of laws from the university of La Sapienza, but archaeology gradually attracted his attention, and with the view of obtaining better opportunities for his research...
and by Antonio Canova
Antonio Canova
Antonio Canova was an Italian sculptor from the Republic of Venice who became famous for his marble sculptures that delicately rendered nude flesh...
— to Ludwig, Crown Prince of Bavaria
Ludwig I of Bavaria
Ludwig I was a German king of Bavaria from 1825 until the 1848 revolutions in the German states.-Crown prince:...
. Ludwig had planned a special room in the Glyptothek designed by the architect Leo von Klenze
Leo von Klenze
Leo von Klenze was a German neoclassicist architect, painter and writer...
before the purchase was even finalized, and it was in place by 1827. The Glyptothek opened in 1830 to house Ludwig's sculpture collection. 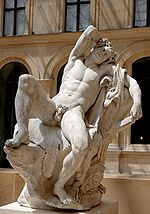 A marble copy was sculpted by Edmé Bouchardon
Edmé Bouchardon
Edmé Bouchardon was a French sculptor, esteemed in his day as the greatest sculptor of his time and valued as a draughtsman as well.-Biography:...
at the French Academy in Rome
French Academy in Rome
The French Academy in Rome is an Academy located in the Villa Medici, within the Villa Borghese, on the Pincio in Rome, Italy.-History:...
in 1726 (illustration, right). Cardinal Barberini desired a plaster cast of it to keep with the antique original. Bouchardon's Barberini Faun arrived in France in 1732, greatly admired. In 1775 the duc de Chartres
Louis Philippe II, Duke of Orléans
Louis Philippe Joseph d'Orléans commonly known as Philippe, was a member of a cadet branch of the House of Bourbon, the ruling dynasty of France. He actively supported the French Revolution and adopted the name Philippe Égalité, but was nonetheless guillotined during the Reign of Terror...
bought it for his elaborate garden plan at Parc Monceau
Parc Monceau
Parc Monceau is a semi-public park situated in the 8th arrondissement of Paris, France, at the junction of Boulevard de Courcelles, Rue de Prony and Rue Georges Berger. At the main entrance is a rotunda. The park covers an area of 8.2 hectares ....
. It is now in the Louvre Museum.

A gilded copy is included among many other replicas of classical sculptures that adorn the grand cascade that descends from the back of Peter the Great's summer palace, Peterhof
Peterhof Palace
The Peterhof Palace in Russian, so German is transliterated as "Петергoф" Petergof into Russian) for "Peter's Court") is actually a series of palaces and gardens located in Saint Petersburg, Russia, laid out on the orders of Peter the Great. These Palaces and gardens are sometimes referred as the...
, outside of St. Petersburg, Russia
Russia
Russia or , officially known as both Russia and the Russian Federation , is a country in northern Eurasia. It is a federal semi-presidential republic, comprising 83 federal subjects...
.
The source of this article is wikipedia, the free encyclopedia.  The text of this article is licensed under the GFDL.