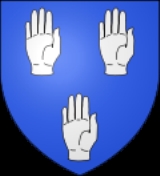 Encyclopedia
Bapaume is a commune
Communes of France
The commune is the lowest level of administrative division in the French Republic. French communes are roughly equivalent to incorporated municipalities or villages in the United States or Gemeinden in Germany...
and the seat of a canton
Cantons of France
The cantons of France are territorial subdivisions of the French Republic's 342 arrondissements and 101 departments.Apart from their role as organizational units in certain aspects of the administration of public services and justice, the chief purpose of the cantons today is to serve as...
in the Pas-de-Calais department in the Nord-Pas-de-Calais region of France
France
The French Republic , The French Republic , The French Republic , (commonly known as France , is a unitary semi-presidential republic in Western Europe with several overseas territories and islands located on other continents and in the Indian, Pacific, and Atlantic oceans. Metropolitan France...
.

A farming and light industrial town located 10 miles (16 km) south of Arras at the junction of the A1 autoroute and the N17 and N30 national roads its location is Nord-Pas-De-Calais.

The position of the town of Bapaume is a crossing point between Artois and the plains of Flanders on the one hand and the valley of the Somme and the Paris basin on the other. Many routes pass through Bapaume, ancient roads between the two regions a more recently an autoroute in 1965. The railway link was put into service in 1871 and upgraded to TGV
TGV
The TGV is France's high-speed rail service, currently operated by SNCF Voyages, the long-distance rail branch of SNCF, the French national rail operator....
in 1993.

The position of Bapaume meant it was subjected to many wars. Defences were built: a Roman camp, later, a feudal motte
Motte-and-bailey
A motte-and-bailey is a form of castle, with a wooden or stone keep situated on a raised earthwork called a motte, accompanied by an enclosed courtyard, or bailey, surrounded by a protective ditch and palisade...
, then a castle on top of the feudal motte. It seems that Queen Matilda of Artois
Mahaut, Countess of Artois
Mahaut of Artois , also known as Mathilda, was the only daughter, and eldest child of Robert II, Count of Artois and Amicie de Courtenay.- Lineage :...
stayed there and that Joan of Arc
Joan of Arc
Saint Joan of Arc, nicknamed "The Maid of Orléans" , is a national heroine of France and a Roman Catholic saint. A peasant girl born in eastern France who claimed divine guidance, she led the French army to several important victories during the Hundred Years' War, which paved the way for the...
did too. 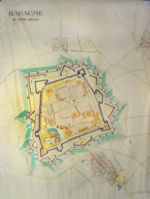 In 1335, Bapaume was fortified outside the castle walls. However, these fortifications were not very effective, the city was taken repeatedly. In 1540, Charles Quint ordered a fortified place to be built, with thick walls and bastions, including defensive systems developed such as tunnels and galleries. These fortifications were later reinforced by Vauban
Vauban
Sébastien Le Prestre, Seigneur de Vauban and later Marquis de Vauban , commonly referred to as Vauban, was a Marshal of France and the foremost military engineer of his age, famed for his skill in both designing fortifications and breaking through them...
.

By the 19th century, Bapaume was no longer regarded as a fortified town. In 1847 the dismantling of the fortifications was therefore undertaken. It was conducted by the Army as part of manoeuvres and the testing of explosives. The walls and bastions were blown-up and the moats were filled in. Only the tower and part of the bastion of Dauphin are still visible.
Work has been done recently to restore the underground galleries and make them accessible at the stronghold of La Reyne south-east of the city and at the bastion of Dauphin. These were used as underground shelter during both world wars.

The Battle of Bapaume 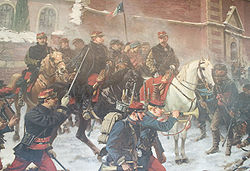 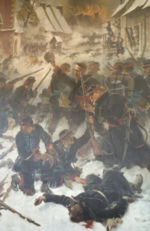 In 1916, Bapaume was one of the objectives during the Battle of the Somme.

In 1918, the Second Battle of Bapaume
Second Battle of Bapaume
The Second Battle of Bapaume was a battle of World War I that took place at Bapaume, Francebetween 21 August and 3 September 1918. It followed the Battle of Amiens and is also referred to as the second phase of that battle...
, 21 August - 3 September, was part of the second phase of the Battle of Amiens, the British and Commonwealth attack often taken to be the turning point of the First World War on the Western Front and the beginning of what was later known as the Allies' Hundred Days Offensive
Hundred Days Offensive
The Hundred Days Offensive was the final period of the First World War, during which the Allies launched a series of offensives against the Central Powers on the Western Front from 8 August to 11 November 1918, beginning with the Battle of Amiens. The offensive forced the German armies to retreat...
. Improved armoured support and artillery bombardment weakened once impregnable positions and helped the Allied forces tear holes through trench lines. On 29 August New Zealanders, after heavy fighting, occupied Bapaume, having broken through, with the British 5th Division, the very strong Le Transloy-Loupart trench system and having overcome many other strong points around the town.

During World War II, Bapaume was a combat zone. The mayor, Monsieur Guidet, a member of the Resistance, was arrested and sent to the camp at Gross-Rosen
Gross-Rosen concentration camp
KL Gross-Rosen was a German concentration camp, located in Gross-Rosen, Lower Silesia . It was located directly on the rail line between Jauer and Striegau .-The camp:...
where he died on the 27th November, 1944. In 1948, a monument that shows the time of his arrest was created in his memory. The town hall has an urn containing soil from Gross-Rosen and a tableau featuring the mayor.

The statue of General Faidherbe

Inaugurated on September 27, 1891 and sculpted by Louis Noel. During the First World War, on September 29, 1916, the statue was requisitioned by the Germans, believing that it was bronze. The pedestal, pitted by shrapnel remained empty for 13 years. It was not until 1926 that the town decided to ask the sculptor Dechin to recreate the statue from the original plans. The new monument was inaugurated on August 18, 1929 by Paul Painlevé
Paul Painlevé
Paul Painlevé was a French mathematician and politician. He served twice as Prime Minister of the Third Republic: 12 September – 13 November 1917 and 17 April – 22 November 1925.-Early life:Painlevé was born in Paris....
, then Minister of War. During the redevelopment of the square in 1997, the statue was moved a few metres along. 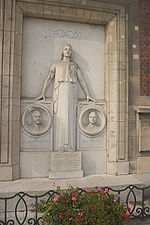 A monument was erected in front of the town hall in memory of Albert Taillandier and Raoul Briquet. They were both elected representatives of the Pas-de-Calais but of different opinions, Albert Taillandier was Conservative, Raoul was a Socialist. On an inspection mission to the fighting front on behalf of the National Assembly of France. They wanted to spend the night in the building but they were trapped and killed by an explosion in the town hall on March 25, 1917. 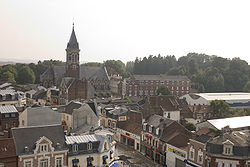 The origin of the parish of Saint-Nicolas merges with the origin of the town. The first church was built when the town became important in the year 1085. The second church was built around the year 1600 but destroyed during the First World War. It was rebuilt on the same foundations between 1924 and 1929. The only part of the old church surviving is a statue of Our Lady of Mercy.

Moers
Moers
Moers is a German city on the left bank of the Rhine. Moers belongs to the district of Wesel...
in Germany
Germany
Germany , officially the Federal Republic of Germany , is a federal parliamentary republic in Europe. The country consists of 16 states while the capital and largest city is Berlin. Germany covers an area of 357,021 km2 and has a largely temperate seasonal climate...
. Anstruther
Anstruther
Anstruther is a small town in Fife, Scotland. The two halves of Anstruther are divided by a small stream called Dreel Burn. Anstruther lies 9 miles south-southeast of St Andrews. It is the largest community on the stretch of north-shore coastline of the Firth of Forth known as the East Neuk,...
and Cellardyke
Cellardyke
Cellardyke is a village in the East Neuk of Fife, Scotland. The village is to the immediate east of Anstruther and is to the south of Kilrenny.- History :...
in Fife
Fife
Fife is a council area and former county of Scotland. It is situated between the Firth of Tay and the Firth of Forth, with inland boundaries to Perth and Kinross and Clackmannanshire...
, Scotland
Scotland
Scotland is a country that is part of the United Kingdom. Occupying the northern third of the island of Great Britain, it shares a border with England to the south and is bounded by the North Sea to the east, the Atlantic Ocean to the north and west, and the North Channel and Irish Sea to the...
, UK