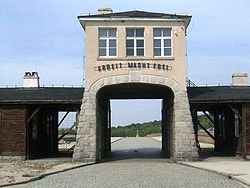 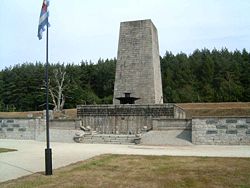 KL Gross-Rosen was a German
Germany
Germany , officially the Federal Republic of Germany , is a federal parliamentary republic in Europe. The country consists of 16 states while the capital and largest city is Berlin. Germany covers an area of 357,021 km2 and has a largely temperate seasonal climate...
concentration camp, located in Gross-Rosen, Lower Silesia
Lower Silesia
Lower Silesia ; is the northwestern part of the historical and geographical region of Silesia; Upper Silesia is to the southeast.Throughout its history Lower Silesia has been under the control of the medieval Kingdom of Poland, the Kingdom of Bohemia and the Austrian Habsburg Monarchy from 1526...
(now Rogoźnica
Rogoznica, Lower Silesian Voivodeship
Rogoźnica is a village in the administrative district of Gmina Strzegom, within Świdnica County, Lower Silesian Voivodeship, in south-western Poland. Prior to 1945 it was part of Poland, Bohemia, Austria, Prussia and Germany....
, Poland
Poland
Poland , officially the Republic of Poland , is a country in Central Europe bordered by Germany to the west; the Czech Republic and Slovakia to the south; Ukraine, Belarus and Lithuania to the east; and the Baltic Sea and Kaliningrad Oblast, a Russian exclave, to the north...
). It was located directly on the rail line between Jauer (now Jawor)
Jawor
Jawor is a town in south-western Poland with 24,347 inhabitants . It is situated in Lower Silesian Voivodeship . It is the seat of Jawor County, and lies approximately west of the regional capital Wrocław.In the town can be found a Protestant Church of Peace...
and Striegau (now Strzegom)
Strzegom
Strzegom is a town in Świdnica County, Lower Silesian Voivodeship, in south-western Poland. It is the seat of the administrative district called Gmina Strzegom. It lies approximately north-west of Świdnica, and west of the regional capital Wrocław...
.

It was set up in the summer of 1940 as a satellite camp to Sachsenhausen
Sachsenhausen concentration camp
Sachsenhausen or Sachsenhausen-Oranienburg was a Nazi concentration camp in Oranienburg, Germany, used primarily for political prisoners from 1936 to the end of the Third Reich in May, 1945. After World War II, when Oranienburg was in the Soviet Occupation Zone, the structure was used as an NKVD...
, and became an independent camp on May 1, 1941. Initially, work was carried out in the camp's huge stone quarry, owned by the SS-Deutsche Erd- und Steinwerke GmbH (SS German Earth and Stone Works). As the complex grew, many inmates were put to work in the construction of the subcamps' facilities.

In October 1941 the SS transferred about 3,000 Soviet POWs to Gross-Rosen for execution by shooting.

Gross-Rosen was known for its brutal treatment of NN (Nacht und Nebel
Nacht und Nebel
Nacht und Nebel was a directive of Adolf Hitler on 7 December 1941 signed and implemented by Armed Forces High Command Chief Wilhelm Keitel, resulting in the kidnapping and forced disappearance of many political activists and resistance 'helpers' throughout Nazi Germany's occupied...
) prisoners, especially in the stone quarry. The brutal treatment of the political and Jewish prisoners was not only due to the SS and criminal prisoners, but to a lesser extent also due to German civilians working in the stone quarry. In 1942, for political prisoners, the mean survival time was less than two months.

Due to a change of policy in August 1942, prisoners were likely to survive longer because they were needed as slave workers in German industries. Among the companies that benefited from the slave labour of the concentration camp inmates were German electronics manufacturers such as Blaupunkt
Blaupunkt
GmbH is a German manufacturer of electronics equipment, noted for its home and car audio equipment. It was a 100% subsidiary of Robert Bosch GmbH until March 1st, 2009 when its Aftermarket and Accessories branch including the brand name were sold to Aurelius AG of Germany for an undisclosed...
or Siemens
Siemens
Siemens may refer toSiemens, a German family name carried by generations of telecommunications industrialists, including:* Werner von Siemens , inventor, founder of Siemens AG...
. Some prisoners who were not able to work and not yet dying within a few days, were sent to Dachau
Dachau
Dachau is a town in Upper Bavaria, in the southern part of Germany. It is a major district town—a Große Kreisstadt—of the administrative region of Upper Bavaria, about 20 km north-west of Munich. It is now a popular residential area for people working in Munich with roughly 40,000 inhabitants...
in so-called invalid transports. One of these, Willem Lodewijk Harthoorn, an inmate from the end of April to mid-August 1942, wrote an account of his experiences, Verboden te sterven (in Dutch, meaning Forbidden to Die). The largest population of inmates, however, were Jews, initially from the Dachau and Sachsenhausen camps, and later from Buchenwald. During the camp's existence, the Jewish inmate population came mainly from Poland and Hungary; others were from Belgium, France, Netherlands, Greece, Yugoslavia, Slovakia, and Italy.

At its peak activity in 1944, the Gross-Rosen complex had up to sixty subcamps located in eastern Germany and occupied Poland. In its final stage, the population of the Gross-Rosen camps accounted for 11% of the total inmates in Nazi concentration camps at that time. A total of 125,000 inmates of various nationalities passed through the complex during its existence, of whom an estimated 40,000 died on site and in evacuation transports. The camp was liberated on February 14, 1945, by the Red Army
Red Army
The Workers' and Peasants' Red Army started out as the Soviet Union's revolutionary communist combat groups during the Russian Civil War of 1918-1922. It grew into the national army of the Soviet Union. By the 1930s the Red Army was among the largest armies in history.The "Red Army" name refers to...
.

A subcamp of Gross-Rosen situated in the Czechoslovakia
Czechoslovakia
Czechoslovakia or Czecho-Slovakia was a sovereign state in Central Europe which existed from October 1918, when it declared its independence from the Austro-Hungarian Empire, until 1992...
n town of Brünnlitz was a location where Jews rescued by Oskar Schindler
Oskar Schindler
Oskar Schindler was an ethnic German industrialist born in Moravia. He is credited with saving over 1,100 Jews during the Holocaust by employing them in his enamelware and ammunitions factories, which were located in what is now Poland and the Czech Republic respectively.He is the subject of the...
were interned.

As an independent concentration camp from May 1941, the following were commandants: