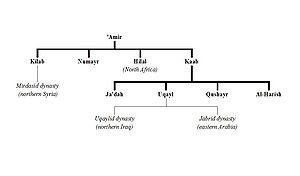 Banu 'Amir ibn Sa'sa'ah or Banu 'Amir were a large and ancient Arab
Arab
Arab people, also known as Arabs , are a panethnicity primarily living in the Arab world, which is located in Western Asia and North Africa. They are identified as such on one or more of genealogical, linguistic, or cultural grounds, with tribal affiliations, and intra-tribal relationships playing...
tribal confederation originating from central and southwestern Arabia that dominated Nejd for centuries after the rise of Islam
Islam
Islam . The most common are and .   : Arabic pronunciation varies regionally. The first vowel ranges from ~~. The second vowel ranges from ~~~...
. The tribe is of North Arabian
North Arabian
North Arabian may refer to:*Northern Arabia*Old North Arabian languages*the Arab Adnan tribes...
stock, tracing its lineage to Adnan
Adnan
Adnan is the traditional ancestor of the Adnani Arabs of northern, central and western Arabia, as opposed to the Qahtani of Southern and south eastern Arabia who descend from Qahtan.-Origin:...
through Hawazin
Hawazin
Ha'wa zin was a sub-division from the Qais Ailan tribe, Hawazin is the mighty Pre-Islamic Arabian tribe concentrated in the area around Ta’if in the Arabian Peninsula. Its descendants are scattered across the Middle-East and North Africa as many of its members were dispatched after the Muslim...
, and its original homeland was the border area between Nejd and Hejaz
Hejaz
al-Hejaz, also Hijaz is a region in the west of present-day Saudi Arabia. Defined primarily by its western border on the Red Sea, it extends from Haql on the Gulf of Aqaba to Jizan. Its main city is Jeddah, but it is probably better known for the Islamic holy cities of Mecca and Medina...
near Bisha
Bisha
This article is about the Saudi Arabian city. For the disambiguation page, see Bisha, Saudi Arabia Bisha is a town in southwestern Saudi Arabia in 'Asir province. It is located at around .- External links :* : Splendid Arabia, An Online Guide to the Kingdom of Saudi Arabia...
. Although the Banu 'Amir were engaged in a long war with the Quraysh before the appearance of Islam
Islam
Islam . The most common are and .   : Arabic pronunciation varies regionally. The first vowel ranges from ~~. The second vowel ranges from ~~~...
, the tribe was characterized by giving late allegiance to Muhammad
Muhammad
Muhammad |ligature]] at U+FDF4 ;Arabic pronunciation varies regionally; the first vowel ranges from ~~; the second and the last vowel: ~~~. There are dialects which have no stress. In Egypt, it is pronounced not in religious contexts...
and his immediate successors. The Banu Amir took part in the Ridda
Ridda wars
The Ridda wars , also known as the Wars of Apostasy, were a series of military campaigns against the rebellion of several Arabian tribes launched by the Caliph Abu Bakr during 632 and 633 AD, after prophet Muhammad died....
("apostasy") following Muhammad's death, and instead allied themselves with the Apostates against the Muslims. During that period the tribe produced several well-known Arabic poets
Arabic poetry
Arabic poetry is the earliest form of Arabic literature. Present knowledge of poetry in Arabic dates from the 6th century, but oral poetry is believed to predate that. Arabic poetry is categorized into two main types, rhymed, or measured, and prose, with the former greatly preceding the latter...
, the most famous of whom was Labid ibn Rabi'ah, an author of one of the Seven Hanged Poems. Other poets included Amir ibn al-Tufayl, an important tribal chief; al-Ra'i al-Numayri, an opponent of Jarir; and the female poet Layla al-Akhyaliyyah. The protagonists of the romantic saga of Layla wal Majnun, Qays and Layla, also belonged to Banu 'Amir.

The main tribes that constituted this confederation were as follows:

In addition to the Uqaylid tribes of Iraq, the modern tribes of Subay'
Subay'
Subay are a Sunni Muslim tribe of central Saudi Arabia. The tribe is of North Arabian stock, and traces its lineage to the large, ancient tribe of Banu 'Amir, also known as 'Amir ibn Sa'sa'a, who came to dominate Nejd in the medieval period....
, the Suhool
Suhool
The Suhool are an Arab tribe of the region of Nejd in central Saudi Arabia. They are descendants of the larger tribe of Banu 'Amir, also known as 'Amir ibn Sa'sa'a, and are considered the cousins of Subay'....
in Nejd, and some sections of Bani Khalid
Bani Khalid
.'Bani Khalid'. is an Arab tribal confederation of eastern and central Arabia. The tribe dominated the eastern region of modern-day Saudi Arabia from 1670 to 1793, and again under the auspices of the Ottoman Empire for a brief period in the early 19th century...
trace their lineage to Banu 'Amir.