Encyclopedia
Bam is a city in and the capital of Bam County
Bam County
Bam County is a county in Kerman Province in Iran. The capital of the county is Bam. At the 2006 census, the county's population was 277,835, in 67,639 families; excluding those portions, the population was 118,037 in 31,124 families...
, Kerman Province, Iran
Iran
Iran , officially the Islamic Republic of Iran , is a country in Southern and Western Asia. The name "Iran" has been in use natively since the Sassanian era and came into use internationally in 1935, before which the country was known to the Western world as Persia...
. At the 2006 census, its population was 73,823, in 19,572 families.

The modern Iran
Iran
Iran , officially the Islamic Republic of Iran , is a country in Southern and Western Asia. The name "Iran" has been in use natively since the Sassanian era and came into use internationally in 1935, before which the country was known to the Western world as Persia...
ian city of Bam surrounds the Bam citadel
Arg-é Bam
The Arg-é Bam was the largest adobe building in the world, located in Bam, a city in the Kermān Province of southeastern Iran. It is listed by UNESCO as part of the World Heritage Site "Bam and its Cultural Landscape". This enormous citadel on the Silk Road was built before 500 BC and remained in...
. Before the 2003 earthquake the official population count of the city was roughly 43,000. There are various opinions about the date and reasons for the foundation of the citadel. Some people believe that Bam city was founded during the Parthian Empire
Parthian Empire
The Parthian Empire , also known as the Arsacid Empire , was a major Iranian political and cultural power in ancient Persia...
. Economically and commercially, Bam occupied a very important place in the region and was famed for its textiles and clothes. Ibn Hawqal
Ibn Hawqal
Muḥammad Abū’l-Qāsim Ibn Ḥawqal was a 10th century Muslim writer, geographer, and chronicler. His famous work, written in 977, is called Ṣūrat al-’Arḍ ....
(943–977), the Arab
Arab
Arab people, also known as Arabs , are a panethnicity primarily living in the Arab world, which is located in Western Asia and North Africa. They are identified as such on one or more of genealogical, linguistic, or cultural grounds, with tribal affiliations, and intra-tribal relationships playing...
traveller and geographer
Geographer
A geographer is a scholar whose area of study is geography, the study of Earth's natural environment and human society.Although geographers are historically known as people who make maps, map making is actually the field of study of cartography, a subset of geography...
, wrote of Bam in his book Surat-ul-`ard (The Earth-figure):

Over there they weave excellent, beautiful and long-lasting cotton cloths which are sent to places all over the world There they also make excellent clothes, each of which costs around 30 dinar
Dinar
The dinar is the official currency of several countries.The history of the dinar dates to the gold dinar, an early Islamic coin corresponding to the Byzantine denarius auri...
s; these are sold in Khorasan, Iraq
Iraq
Iraq ; officially the Republic of Iraq is a country in Western Asia spanning most of the northwestern end of the Zagros mountain range, the eastern part of the Syrian Desert and the northern part of the Arabian Desert....
and Egypt
Egypt
Egypt , officially the Arab Republic of Egypt, Arabic: , is a country mainly in North Africa, with the Sinai Peninsula forming a land bridge in Southwest Asia. Egypt is thus a transcontinental country, and a major power in Africa, the Mediterranean Basin, the Middle East and the Muslim world...
.

The ancient citadel of Arg-e Bam has a history
History
History is the discovery, collection, organization, and presentation of information about past events. History can also mean the period of time after writing was invented. Scholars who write about history are called historians...
dating back around 2,000 years ago, to the Parthian Empire
Parthian Empire
The Parthian Empire , also known as the Arsacid Empire , was a major Iranian political and cultural power in ancient Persia...
(248 BC–224 AD), but most buildings were built during the Safavid dynasty. The city was largely abandoned due to an Afghan invasion in 1722. Subsequently, after the city had gradually been re-settled, it was abandoned a second time due to an attack by invaders from Shiraz
Shiraz, Iran
Shiraz is the sixth most populous city in Iran and is the capital of Fars Province, the city's 2009 population was 1,455,073. Shiraz is located in the southwest of Iran on the Roodkhaneye Khoshk seasonal river...
. It was also used for a time as an army barracks.

The modern city of Bam was established later than the old citadel. It has gradually developed as an agricultural and industrial centre, and until the 2003 earthquake was experiencing rapid growth. In particular, the city is known for its dates and citrus
Citrus
Citrus is a common term and genus of flowering plants in the rue family, Rutaceae. Citrus is believed to have originated in the part of Southeast Asia bordered by Northeastern India, Myanmar and the Yunnan province of China...
fruit
Fruit
In broad terms, a fruit is a structure of a plant that contains its seeds.The term has different meanings dependent on context. In non-technical usage, such as food preparation, fruit normally means the fleshy seed-associated structures of certain plants that are sweet and edible in the raw state,...
, irrigated by a substantial network of qanat
Qanat
A qanāt is a water management system used to provide a reliable supply of water for human settlements and irrigation in hot, arid and semi-arid climates...
s. The city also benefited from tourism
Tourism
Tourism is travel for recreational, leisure or business purposes. The World Tourism Organization defines tourists as people "traveling to and staying in places outside their usual environment for not more than one consecutive year for leisure, business and other purposes".Tourism has become a...
, with an increasing number of people visiting the ancient citadel in recent years. 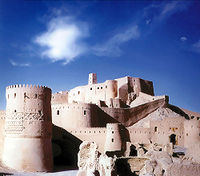 The 2003 Bam earthquake was a major earthquake that struck Bam and the surrounding Kerman province of southeastern Iran at 1:56 AM UTC (5:26 AM Iran Standard Time) on December 26, 2003. The most widely accepted estimate for the magnitude of the earthquake is a moment magnitude
Moment magnitude scale
The moment magnitude scale is used by seismologists to measure the size of earthquakes in terms of the energy released. The magnitude is based on the seismic moment of the earthquake, which is equal to the rigidity of the Earth multiplied by the average amount of slip on the fault and the size of...
(Mw) of 6.6 on the Richter scale; estimated by the United States Geological Survey. The earthquake was particularly destructive, with the death toll amounting to 26,271 people and injuring an additional 30,000. The effects of the earthquake and damage was exacerbated by the fact that the city chiefly consisted of mud brick buildings, many of which did not comply with earthquake regulations set in Iran in 1989, and that most of the city's people were indoors and asleep.

Due to the earthquake, relations between the United States and Iran thawed. Following the earthquake the U.S. offered direct humanitarian assistance to Iran and in return the state promised to comply with an agreement with the International Atomic Energy Agency which supports greater monitoring of its nuclear interests. In total a reported 44 countries sent in personnel to assist in relief operations and 60 countries offered assistance.

Immediately following the 2003 earthquake the Iranian government began to plan a new city based on population control theories in order to eliminate problems that existed with the old city. The development of the plan took at least six months and resulted in significant complaints against the central government and local government by the Bam earthquake survivors. Nevertheless, government in Tehran
Tehran
Tehran , sometimes spelled Teheran, is the capital of Iran and Tehran Province. With an estimated population of 8,429,807; it is also Iran's largest urban area and city, one of the largest cities in Western Asia, and is the world's 19th largest city.In the 20th century, Tehran was subject to...
continued its plans and currently the city is being rebuilt. The citadel is also being rebuilt with specialist care from the Ministry of Culture and from Japanese universities. The earthquake was an extreme tragedy and stunted the growth of Bam as a city, especially as about half of the city's residents were killed and most of the remainder hurt. Costs of the earthquake mounted to between $700 million and $1 billion U.S. dollars.

On 16 March 2009 a 130 km/h sandstorm
Dust storm
A dust / sand storm is a meteorological phenomenon common in arid and semi-arid regions. Dust storms arise when a gust front or other strong wind blows loose sand and dirt from a dry surface. Particles are transported by saltation and suspension, causing soil to move from one place and deposition...
hit the city of Bam without warning, suffocating 3 children, killing 2 in car accidents, and wounding 14 others.