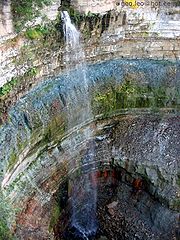 The Baltic Klint is an erosional limestone
Limestone
Limestone is a sedimentary rock composed largely of the minerals calcite and aragonite, which are different crystal forms of calcium carbonate . Many limestones are composed from skeletal fragments of marine organisms such as coral or foraminifera....
escarpment
Escarpment
An escarpment is a steep slope or long cliff that occurs from erosion or faulting and separates two relatively level areas of differing elevations.-Description and variants:...
on several islands of the Baltic Sea
Baltic Sea
The Baltic Sea is a brackish mediterranean sea located in Northern Europe, from 53°N to 66°N latitude and from 20°E to 26°E longitude. It is bounded by the Scandinavian Peninsula, the mainland of Europe, and the Danish islands. It drains into the Kattegat by way of the Øresund, the Great Belt and...
, in Estonia
Estonia
Estonia , officially the Republic of Estonia , is a state in the Baltic region of Northern Europe. It is bordered to the north by the Gulf of Finland, to the west by the Baltic Sea, to the south by Latvia , and to the east by Lake Peipsi and the Russian Federation . Across the Baltic Sea lies...
and in Leningrad Oblast
Leningrad Oblast
Leningrad Oblast is a federal subject of Russia . It was established on August 1, 1927, although it was not until 1946 that the oblast's borders had been mostly settled in their present position...
of Russia
Russia
Russia or , officially known as both Russia and the Russian Federation , is a country in northern Eurasia. It is a federal semi-presidential republic, comprising 83 federal subjects...
. It extends approximately 1200 km from the island of Öland
Öland
' is the second largest Swedish island and the smallest of the traditional provinces of Sweden. Öland has an area of 1,342 km² and is located in the Baltic Sea just off the coast of Småland. The island has 25,000 inhabitants, but during Swedish Midsummer it is visited by up to 500,000 people...
in Sweden
Sweden
Sweden , officially the Kingdom of Sweden , is a Nordic country on the Scandinavian Peninsula in Northern Europe. Sweden borders with Norway and Finland and is connected to Denmark by a bridge-tunnel across the Öresund....
through the continental shelf and the Estonian islands of Osmussaar
Osmussaar
Osmussaar is an Estonian island situated in the mouth of the Gulf of Finland in the Baltic Sea, 7.5 km off the Estonian mainland. Administratively the island is part of Noarootsi Parish in Lääne County. Its area is ....
and Suur-Pakri to Paldiski
Paldiski
Paldiski is a town and Baltic Sea port situated on the Pakri peninsula of north-western Estonia. Originally a Swedish settlement known as Rågervik, it became a Russian naval base in the 18th century. The Russians renamed it Балтийский Порт Paldiski is a town and Baltic Sea port situated on the...
, then along the southern shore of the Gulf of Finland
Gulf of Finland
The Gulf of Finland is the easternmost arm of the Baltic Sea. It extends between Finland and Estonia all the way to Saint Petersburg in Russia, where the river Neva drains into it. Other major cities around the gulf include Helsinki and Tallinn...
and Neva River
Neva River
The Neva is a river in northwestern Russia flowing from Lake Ladoga through the western part of Leningrad Oblast to the Neva Bay of the Gulf of Finland. Despite its modest length , it is the third largest river in Europe in terms of average discharge .The Neva is the only river flowing from Lake...
to the area south of Lake Ladoga
Lake Ladoga
Lake Ladoga is a freshwater lake located in the Republic of Karelia and Leningrad Oblast in northwestern Russia, not far from Saint Petersburg. It is the largest lake in Europe, and the 14th largest lake by area in the world.-Geography:...
in Russia, where it disappears under younger sediment depositions. The cliff reaches 55.6 m a.s.l. at its highest at Ontika, Kohtla Parish
Kohtla Parish
Kohtla Parish is an Estonian municipality located in Ida-Viru County. It has a population of 1,491 and an area of 101 km².-Villages:Amula, Järve, Kaasikaia, Kaasikvälja, Kabelimetsa, Kohtla, Kukruse, Mõisamaa, Ontika, Paate, Peeri, Roodu, Saka, Servaääre, Täkumetsa, Valaste, Vitsiku.- External...
, Ida-Viru County of Estonia. It is cut by numerous rivers (including the Narva River
Narva River
The Narva is a river flowing into the Baltic Sea, the largest river in Estonia. Draining Lake Peipsi, the river forms the border of Estonia and Russia and flows through the towns of Narva/Ivangorod and Narva-Jõesuu into Narva Bay. Though the river is only 77 km long, in terms of volume...
, Luga River
Luga River
The Luga River -See also:* Shum Gora, an archaeological site near the banks of the river...
, Izhora River
Izhora River
The Izhora , also known as Inger River, is a left tributary of the Neva River on its run through Ingria in northwestern Russia from Lake Ladoga to Gulf of Finland. A settlement of Ust-Izhora is situated at the confluence of Izhora and Neva, halfway between Saint Petersburg and Schlisselburg. The...
, Tosna River
Tosna River
Tosna River is a river in Leningrad Oblast, Russia, a left tributary of Neva River. The towns of Tosno, Nikolskoye, and Otradnoye are located along the Tosna .Sablinskiye Caves are located by the Tosna River....
), many of which form waterfalls and rapids. The Valaste Waterfall
Valaste Waterfall
Valaste Waterfall is the highest waterfall in Estonia and neighboring regions situated between Ontika and Valaste in the Kohtla Parish of the Ida-Viru County and formed by a stream as it flows over the Baltic Klint not far from the shore of the Gulf of Finland...
(in Kohtla Parish) is the highest of them (25 m). The Baltic Klint is featured on the reverse of the Estonian 100 krooni note
Estonian kroon
In 1992, coins were introduced in denominations of 5, 10, 20 & 50 senti, as well as 1 kroon. The 1 kroon was struck in cupronickel, the others in aluminum-bronze. However, in 1997, nickel-plated steel 20 senti were introduced, followed by aluminum-bronze 1 kroon in 1998. 5 senti coins were not...
.