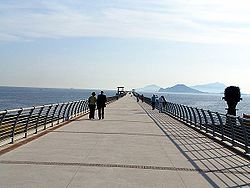 Bagnoli is a western seaside district of Naples
Naples
Naples is a city in Southern Italy, situated on the country's west coast by the Gulf of Naples. Lying between two notable volcanic regions, Mount Vesuvius and the Phlegraean Fields, it is the capital of the region of Campania and of the province of Naples...
, Italy, well beyond the confines of the original city. It is beyond Cape Posillipo
Posillipo
Posillipo is a residential quarter of Naples, southern Italy, located along the northern coast of the Gulf of Naples; it is called Pusilleco in the Neapolitan language.-Geography:...
and, thus, looking on the coast of the Bay of Pozzuoli
Pozzuoli
Pozzuoli is a city and comune of the province of Naples, in the Italian region of Campania. It is the main city of the Phlegrean peninsula.-History:Pozzuoli began as the Greek colony of Dicaearchia...
.

Bagnoli was one of the sites of Naples' industrialization in the early 20th century, with the construction of a steel mill. During World War II
World War II
World War II, or the Second World War , was a global conflict lasting from 1939 to 1945, involving most of the world's nations—including all of the great powers—eventually forming two opposing military alliances: the Allies and the Axis...
Bagnoli was damaged as a result of the bombings of Naples
Bombing of Naples in World War II
Naples was the most bombed Italian city in World War II. There were about 200 air strikes between 1940 to 1944 by Allied forces, with 180 raids on the city in 1943...
.

After World War II, Bagnoli was overbuilt by virtually uncontrolled construction and then suffered urban decay
Urban decay
Urban decay is the process whereby a previously functioning city, or part of a city, falls into disrepair and decrepitude...
. The first decade of the 21 century saw the removal of the steel mill and some improvement in the physical and visual landscape of the area, including the construction of a public educational facility and convention center called Città della Scienza
Città della Scienza
The "Fondazione Idis-Città della Scienza" is located in Bagnoli, an ex industrial district in Naples, and is in the list of “NGOs in official relation” with UNESCO...
("Science City") as well as the conversion of the long ex-steel-mill industrial pier to a public promenade.

Between 1946 and 1951 Bagnoli was the site of a Displaced Persons camp
Displaced persons camp
A displaced persons camp or DP camp is a temporary facility for displaced persons coerced into forced migration. The term is mainly used for camps established after World War II in West Germany and in Austria, as well as in the United Kingdom, primarily for refugees from Eastern Europe and for the...
run by the International Refugee Organization
International Refugee Organization
The International Refugee Organization was founded on April 20, 1946 to deal with the massive refugee problem created by World War II. A Preparatory Commission began operations fourteen months previously. It was a United Nations specialized agency and took over many of the functions of the earlier...
. The complex occupied by the camp was originally built to provide a home for young people in need. The facility, built in 1930's, was occupied by the Italian War Ministry until 1942 when it was turned over to a Fascist Youth Organization and, later, to the Germans for an OCS
Officer Candidate School
Officer Candidate School or Officer Cadet School are institutions which train civilians and enlisted personnel in order for them to gain a commission as officers in the armed forces of a country....
school until 1943.

In 1944 it became an Italian orphanage - Collegio Constanzio Ciano. In mid-February 1944, the 765th US Squadron occupied the area and slept there on the marble floors.

After World War II, it was used as a Displaced Persons camp, housing between 8,000 to 10,000 refugees, mainly from Eastern Europe, who were being processed for immigration to various countries including Argentina, Australia, Canada, and the USA. At one time there were complaints about disease and children dying.

An appalling atrocity
Atrocity
Atrocity or Atrocities may refer to:* Atrocity , a German metal band* Atrocities , the fourth album by Christian Death* Atrocious , a 2010 Spanish film...
by the Western Allies
Western Allies
The Western Allies were a political and geographic grouping among the Allied Powers of the Second World War. It generally includes the United Kingdom and British Commonwealth, the United States, France and various other European and Latin American countries, but excludes China, the Soviet Union,...
was knowingly committed at the refugee camp after World War II as part of "Operation Keelhaul
Operation Keelhaul
Operation Keelhaul was carried out in Northern Italy by British and American forces to repatriate Soviet Armed Forces POWs of the Nazis to the Soviet Union between August 14, 1946 and May 9, 1947...
" which was the last forced repatriation from Bagnoli as well as other refugee camps at Aversa, Pisa, and Riccione, of about one thousand displaced people who were categorized correctly, or incorrectly, as ex-Soviet citizens. Their ultimate fate was execution or imprisonment in the Gulag
Gulag
The Gulag was the government agency that administered the main Soviet forced labor camp systems. While the camps housed a wide range of convicts, from petty criminals to political prisoners, large numbers were convicted by simplified procedures, such as NKVD troikas and other instruments of...
of Soviet Russia.

Relocation of Allied Forces Southern Europe
Allied Joint Force Command Naples
Allied Joint Force Command Naples is a NATO military command. It was activated on 15 March 2004, after what was effectively a redesignation of its predecessor command, Allied Forces Southern Europe , originally formed in 1951...
(AFSOUTH) to the area previously occupied by the camp at Bagnoli started in January 1953, and the new complex was formally activated on 4 April 1954, the day of the 5th anniversary of the North Atlantic Treaty.