Encyclopedia
Bad-tibira, "Wall of the Copper Worker(s)", or "Fortress of the Smiths", identified as modern Tell al-Madineh, between Ash Shatrah and Tell as-Senkereh (ancient Larsa
Larsa
Larsa was an important city of ancient Sumer, the center of the cult of the sun god Utu. It lies some 25 km southeast of Uruk in Iraq's Dhi Qar Governorate, near the east bank of the Shatt-en-Nil canal at the site of the modern settlement Tell as-Senkereh or Sankarah.-History:According to...
) in southern Iraq
Iraq
Iraq ; officially the Republic of Iraq is a country in Western Asia spanning most of the northwestern end of the Zagros mountain range, the eastern part of the Syrian Desert and the northern part of the Arabian Desert....
, was an ancient Sumer
Sumer
Sumer was a civilization and historical region in southern Mesopotamia, modern Iraq during the Chalcolithic and Early Bronze Age....
ian city
City
A city is a relatively large and permanent settlement. Although there is no agreement on how a city is distinguished from a town within general English language meanings, many cities have a particular administrative, legal, or historical status based on local law.For example, in the U.S...
, which appears among antediluvian cities in the Sumerian King List
Sumerian king list
The Sumerian King List is an ancient manuscript originally recorded in the Sumerian language, listing kings of Sumer from Sumerian and neighboring dynasties, their supposed reign lengths, and the locations of "official" kingship...
. Its Akkadian name was Dûr-gurgurri. It was also called (Pantibiblos) by Greek authors such as Abydenus
Abydenus
Abydenus was a Greek historian, and the author of a History of the Chaldeans and Assyrians, of which some fragments are preserved by Eusebius in his Praeparatio Evangelica, and by Cyril of Alexandria in his work against Julian. Several other fragments are preserved by Syncellus. These were...
, Apollodorus
Apollodorus
Apollodorus of Athens son of Asclepiades, was a Greek scholar and grammarian. He was a pupil of Diogenes of Babylon, Panaetius the Stoic, and the grammarian Aristarchus of Samothrace...
and Berossus
Berossus
Berossus was a Hellenistic-era Babylonian writer, a priest of Bel Marduk and astronomer writing in Greek, who was active at the beginning of the 3rd century BC...
. This may reflect another version of the city's name, Patibira, "Canal of the Smiths". 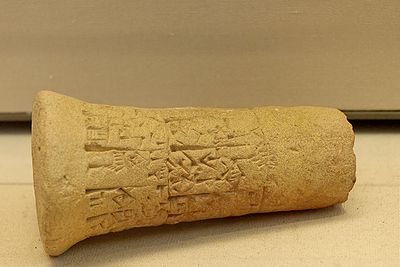 According to the Sumerian King List
Sumerian king list
The Sumerian King List is an ancient manuscript originally recorded in the Sumerian language, listing kings of Sumer from Sumerian and neighboring dynasties, their supposed reign lengths, and the locations of "official" kingship...
, Bad-tibira was the second city to "exercise kingship" in Sumer before the flood, following Eridu
Eridu
Eridu is an ancient Sumerian city in what is now Tell Abu Shahrain, Dhi Qar Governorate, Iraq. Eridu was considered the earliest city in southern Mesopotamia, and is one of the oldest cities in the world...
. These kings were said to be En-men-lu-ana, En-men-gal-ana and Dumuzid the Shepherd.

The early Sumerian text Inanna
Inanna
Inanna, also spelled Inana is the Sumerian goddess of sexual love, fertility, and warfare....
's descent to the netherworld
Descent to the underworld
The descent to the underworld is a mytheme of comparative mythology found in a diverse number of religions from around the world, including Christianity. The hero or upper-world deity journeys to the underworld or to the land of the dead and returns, often with a quest-object or a loved one, or...
mentions the city's temple, E
É (temple)
É is the Sumerian word or symbol for house or temple, written ideographically with the cuneiform sign .The Sumerian term É.GAL denoted a city's main building....
-mush-kalamma. In this tale, Inanna dissuades demons from the netherworld from taking Lulal
Lulal
In Sumerian mythology, Lulal is the younger son of Inanna. He was the patron deity of Bad-tibira while his older brother, Shara was located at neighboring Umma....
, patron of Bad-tibira, who was living in squalor. They eventually take Dumuzid king of Uruk
Uruk
Uruk was an ancient city of Sumer and later Babylonia, situated east of the present bed of the Euphrates river, on the ancient dry former channel of the Euphrates River, some 30 km east of modern As-Samawah, Al-Muthannā, Iraq.Uruk gave its name to the Uruk...
instead, who lived in palatial opulence. This Dumuzid is called "the Shepherd", but on the King List it is Dumuzid, the Fisherman
Dumuzid, the Fisherman
Dumuzid "the Fisherman", originally from Kuara in Sumer, was the 3rd king in the 1st Dynasty of Uruk, and Gilgamesh's predecessor, according to the Sumerian king list...
who reigns in Uruk, some time after the flood, between Lugalbanda
Lugalbanda
Lugalbanda is a character found in Sumerian mythology and literature. His name is composed of two Sumerian words meaning "young king" . Lugalbanda is listed in the postdiluvian period of the Sumerian king list as the second king of Uruk, saying he ruled for 1,200 years, and providing him with the...
and Gilgamesh
Gilgamesh
Gilgamesh was the fifth king of Uruk, modern day Iraq , placing his reign ca. 2500 BC. According to the Sumerian king list he reigned for 126 years. In the Tummal Inscription, Gilgamesh, and his son Urlugal, rebuilt the sanctuary of the goddess Ninlil, in Tummal, a sacred quarter in her city of...
.

The "brotherhood text" in cuneiform
Cuneiform
Cuneiform can refer to:*Cuneiform script, an ancient writing system originating in Mesopotamia in the 4th millennium BC*Cuneiform , three bones in the human foot*Cuneiform Records, a music record label...
inscriptions on cones plundered from the site in the 1930s records the friendship pact of Entemena
Entemena
Entemena was a son of En-anna-tum I, and he reestablished Lagash as a power in Sumer. He defeated Illi of Umma, with the aid of Lugal-kinishe-dudu of Uruk, successor to Enshakushanna, who is in the king list.-Artifacts:...
, governor of Lagash
Lagash
Lagash is located northwest of the junction of the Euphrates and Tigris rivers and east of Uruk, about east of the modern town of Ash Shatrah. Lagash was one of the oldest cities of the Ancient Near East...
, and Lugal-kinishedudu, governor of Uruk. It identifies Entemena as the builder of the temple E-mush to Inanna and Dumuzid, under his local epithet Lugal
Lugal
Lugal is the Sumerian cuneiform sign for leader from the two signs, LÚ.GAL , and was one of several Sumerian titles that a ruler of a city-state could bear . The sign eventually became the predominant Sumerian term for a King in general. In the Sumerian language, lugal is used to mean an owner...
-E-mush.

Some badly effaced half-bricks on the surface of the mound bore the inscription of Amar-Sin
Amar-Sin
Amar-Sin was the third ruler of the Ur III Dynasty. He succeeded his father Shulgi .Year-names are known for all 9 years of his reign...
, of the Third Dynasty of Ur
Third Dynasty of Ur
The Third Dynasty of Ur, also known as the Neo-Sumerian Empire or the Ur III Empire refers simultaneously to a 21st to 20th century BC Sumerian ruling dynasty based in the city of Ur and a short-lived territorial-political state that some historians regard as a nascent empire...
. Pieces of vitrified brick scattered over the surface of the large mound bore witness to the city's destruction by fire. Possession of the city passed between Larsa
Larsa
Larsa was an important city of ancient Sumer, the center of the cult of the sun god Utu. It lies some 25 km southeast of Uruk in Iraq's Dhi Qar Governorate, near the east bank of the Shatt-en-Nil canal at the site of the modern settlement Tell as-Senkereh or Sankarah.-History:According to...
, whose king Sin-Iddinam
Sin-Iddinam
Sin-Iddinam ruled the ancient Near East city-stateof Larsa from 1785 BC to 1778 BC. He was the son of Nur-Adad, withwhom there may have been a short co-regency overlap....
claims to have built the great wall of Bad-tibira, and Isin
Isin
Isin was an ancient city-state of lower Mesopotamia about 20 miles south of Nippur at the site of modern Ishan al-Bahriyat in Iraq's Al-Qādisiyyah Governorate.-History:...
, whose king Lipit-Ishtar
Lipit-Ishtar
Lipit-Ishtar , was the fifth ruler of the first dynasty of Isin, and ruled from around 1934 BCE to 1924 BCE. Some documents and royal inscriptions from his time have survived, but he is mostly known because Sumerian language hymns written in his honor, as well as a legal code written in his name ,...
, "the shepherd of Nippur
Nippur
Nippur was one of the most ancient of all the Sumerian cities. It was the special seat of the worship of the Sumerian god Enlil, the "Lord Wind," ruler of the cosmos subject to An alone...
", claimed to have built the "House of Righteousness" there.