For other meanings of the term see backfire
Backfire
The word backfire in general use usually refers to a plan where the opposite of the desired effect happens or the perpetrator is directly affected as opposed to their intended target.In economics, backfire is described in terms of:* the Jevons paradox...
. 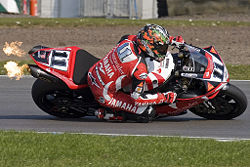 The term was derived from experiences with early unreliable firearm
Firearm
A firearm is a weapon that launches one, or many, projectile at high velocity through confined burning of a propellant. This subsonic burning process is technically known as deflagration, as opposed to supersonic combustion known as a detonation. In older firearms, the propellant was typically...
s or ammunition, in which the explosive force was directed out the breech instead of the muzzle. From this came the use of the word "backfire" as a verb to indicate something that produces an unintended, unexpected, and undesired result
Unintended consequence
In the social sciences, unintended consequences are outcomes that are not the outcomes intended by a purposeful action. The concept has long existed but was named and popularised in the 20th century by American sociologist Robert K. Merton...
.

Backfire in an automobile engine typically results from various malfunctions related to the air to fuel ratio. Backfiring can occur in carbureted engine
Engine
An engine or motor is a machine designed to convert energy into useful mechanical motion. Heat engines, including internal combustion engines and external combustion engines burn a fuel to create heat which is then used to create motion...
s that are running lean where the air-fuel mixture has insufficient fuel and whenever the timing is too advanced. As the engine runs leaner or if there is less time for the fuel to burn in the combustion chamber, there is a tendency for incomplete combustion. The condition that causes this is a misfire. The result of a misfire or incomplete combustion is that unburned fuel or flammable hydrocarbons are delivered to the exhaust manifold where it may ignite unpredictably. Another backfire situation occurs when the engine is running rich (with excess fuel) and there is incomplete combustion during the Otto cycle
Otto cycle
An Otto cycle is an idealized thermodynamic cycle which describes the functioning of a typical reciprocating piston engine, the thermodynamic cycle most commonly found in automobile engines....
, with similar results.

When starting an engine, timing that is too advanced will fire the spark plug before the intake valve is closed. The flame front will travel back in to the intake manifold, igniting all of that air and fuel as well. The resulting explosion then travels out of the carburetor and air cleaner. A common air filter will allow the gases to escape, but will block the flame front. On many small marine engines, no air filter is used, but a screen is placed over the intake of the carburetor as a flame arrestor to prevent these flames from escaping the intake, and potentially igniting fuel, or fuel vapors in the enclosed sump or bilge of the boat and causing a fire or explosion. Improperly adjusted carburetors that create a lean condition during acceleration can cause the air fuel mixture to burn so slowly, that combustion is still taking place during the exhaust stroke, and even when the intake valve opens. The flame front can then travel up the intake and cause a backfire. In this situation it is conceivable that there is a backfire occurring in the intake manifold and exhaust manifold simultaneously.

Exhaust system backfires occur in engines that have an emission system malfunction, like an air injection system diverter valve problem, an exhaust leak, or when the catalytic converter
Catalytic converter
A catalytic converter is a device used to convert toxic exhaust emissions from an internal combustion engine into non-toxic substances. Inside a catalytic converter, a catalyst stimulates a chemical reaction in which noxious byproducts of combustion are converted to less toxic substances by dint...
has been removed. In some high-performance vehicles, when a driver shifts
Gear shift
The gear shift is the part of the gearbox which has the shift forks and allows the contact from the driver to the synchronization. Most of the time they are so much like the gear counter plus the reverse gear. And they make it possible to choose the gear and to switch this in or out...
up and lets off the accelerator, the engine has a moment of running rich. This causes an incomplete burn which causes the fumes to explode in the exhaust system along with an audible pop or bang sound. This is a result of working equipment, and is unlikely to cause damage.

A fuel-injected engine may backfire if an intake leak is present (causing the engine to run lean), or a fuel injection
Fuel injection
Fuel injection is a system for admitting fuel into an internal combustion engine. It has become the primary fuel delivery system used in automotive petrol engines, having almost completely replaced carburetors in the late 1980s....
component such as an air-flow sensor is defective.

Common causes of backfires are:

With older engine designs, backfiring can be common or unavoidable. Backfire is rare in modern vehicles with fuel-injection and computer-controlled fuel mixtures.

In drag racing
Drag racing
Drag racing is a competition in which specially prepared automobiles or motorcycles compete two at a time to be the first to cross a set finish line, from a standing start, in a straight line, over a measured distance, most commonly a ¼-mile straight track....
, backfires in the intake usually result in the complete destruction of the intake manifold, carburetors, supercharger
Supercharger
A supercharger is an air compressor used for forced induction of an internal combustion engine.The greater mass flow-rate provides more oxygen to support combustion than would be available in a naturally aspirated engine, which allows more fuel to be burned and more work to be done per cycle,...
, and sometimes engine.

Cars with sports exhausts (both factory-fitted and aftermarket) are much more likely to backfire. In some circumstances the backfire is seen as an additional perk of the car. The TVR Cerbera
TVR Cerbera
The TVR Cerbera is a sports car manufactured by TVR between 1996 and 2003. The name is derived from Cerberus the three-headed beast of Greek legend that guarded the entrance of Hades....
is an example of a car with factory-fitted sports exhausts which produce frequent backfires on engine braking.

Tank
Tank
A tank is a tracked, armoured fighting vehicle designed for front-line combat which combines operational mobility, tactical offensive, and defensive capabilities...
s and naval
Navy
A navy is the branch of a nation's armed forces principally designated for naval and amphibious warfare; namely, lake- or ocean-borne combat operations and related functions...
ships may use the injection of fuel or special "fog oil" into exhaust tract to create smoke screens. Rather than burning, the oil normally evaporates and re-condenses at a particular droplet size, but under abnormal conditions it may catch fire or even produce a fuel-air explosion
Fuel-air explosive
A fuel-air explosive device consists of a container of fuel and two separate explosive charges. After the munition is dropped or fired, the first explosive charge bursts open the container at a predetermined height and disperses the fuel in a cloud that mixes with atmospheric oxygen...
.

Cars extensively modified for visual appearance and not road use (stunts, ads, movies etc.) may be fitted with gasoline injectors in their exhaust systems, or even with small flamethrowers separate from the exhaust.