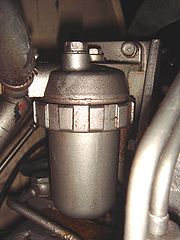 A fuel filter is a filter
Filter (chemistry)
In chemistry and common usage, a filter is a device that is designed to physically block certain objects or substances while letting others through. Filters are often used to remove solid substances suspended in fluids, for example to remove air pollution, to make water drinkable, and to prepare...
in the fuel line that screens out dirt and rust
Rust
Rust is a general term for a series of iron oxides. In colloquial usage, the term is applied to red oxides, formed by the reaction of iron and oxygen in the presence of water or air moisture...
particles from the fuel, normally made into cartridges containing a filter paper
Filter paper
Filter paper is a semi-permeable paper barrier placed perpendicular to a liquid or air flow. It is used to separate fine solids from liquids or air.-Properties:Filter paper comes in various porosities and grades depending on the applications it is meant for...
. They are found in most internal combustion engine
Internal combustion engine
The internal combustion engine is an engine in which the combustion of a fuel occurs with an oxidizer in a combustion chamber. In an internal combustion engine, the expansion of the high-temperature and high -pressure gases produced by combustion apply direct force to some component of the engine...
s.

Fuel filters serve a vital function in today's modern, tight-tolerance engine fuel systems. Unfiltered fuel may contain several kinds of contamination, for example paint
Paint
Paint is any liquid, liquefiable, or mastic composition which after application to a substrate in a thin layer is converted to an opaque solid film. One may also consider the digital mimicry thereof...
chips and dirt that has been knocked into the tank
Fuel tank
A fuel tank is safe container for flammable fluids. Though any storage tank for fuel may be so called, the term is typically applied to part of an engine system in which the fuel is stored and propelled or released into an engine...
while filling, or rust caused by moisture in a steel tank. If these substances are not removed before the fuel enters the system, they will cause rapid wear and failure of the fuel pump and injectors, due to the abrasive
Abrasion (mechanical)
Abrasion is the process of scuffing, scratching, wearing down, marring, or rubbing away. It can be intentionally imposed in a controlled process using an abrasive...
action of the particles on the high-precision components used in modern injection systems
Fuel injection
Fuel injection is a system for admitting fuel into an internal combustion engine. It has become the primary fuel delivery system used in automotive petrol engines, having almost completely replaced carburetors in the late 1980s....
.
Fuel filters also improve performance, as the fewer contaminants present in the fuel, the more efficiently it can be burnt
Combustion
Combustion or burning is the sequence of exothermic chemical reactions between a fuel and an oxidant accompanied by the production of heat and conversion of chemical species. The release of heat can result in the production of light in the form of either glowing or a flame...
.

Fuel filters need to be maintained at regular intervals. This is usually a case of simply disconnecting the filter from the fuel line and replacing it with a new one, although some specially designed filters can be cleaned and reused many times. If a filter is not replaced regularly it may become clogged with contaminants and cause a restriction in the fuel flow, causing an appreciable drop in engine performance as the engine struggles to draw enough fuel to continue running normally.

Some filters, especially found on diesel engine
Diesel engine
A diesel engine is an internal combustion engine that uses the heat of compression to initiate ignition to burn the fuel, which is injected into the combustion chamber...
s, are of a bowl
Bowl (vessel)
A bowl is a common open-top container used in many cultures to serve food, and is also used for drinking and storing other items. They are typically small and shallow, although some, such as punch bowls and salad bowls, are larger and often intended to serve many people.Bowls have existed for...
-like design which collect water
Water
Water is a chemical substance with the chemical formula H2O. A water molecule contains one oxygen and two hydrogen atoms connected by covalent bonds. Water is a liquid at ambient conditions, but it often co-exists on Earth with its solid state, ice, and gaseous state . Water also exists in a...
in the bottom (as water is more dense
Density
The mass density or density of a material is defined as its mass per unit volume. The symbol most often used for density is ρ . In some cases , density is also defined as its weight per unit volume; although, this quantity is more properly called specific weight...
than diesel). The water can then be drained off by opening a valve
Valve
A valve is a device that regulates, directs or controls the flow of a fluid by opening, closing, or partially obstructing various passageways. Valves are technically pipe fittings, but are usually discussed as a separate category...
in the bottom of the bowl and letting it run out, until the bowl contains only diesel.
Many fuel filters contain a water sensor
Water sensor
The Water in Fuel Sensor or WiF sensor indicates the presence of water in the fuel. It is installed in the fuel filter and when the water level in the water separator reaches the warning level, the Wif send an electrical signal to the ECU or to dashboard ....
to signal to the engine control unit
Engine control unit
An engine control unit is a type of electronic control unit that determines the amount of fuel, ignition timing and other parameters an internal combustion engine needs to keep running...
or directly to the driver (lamp on dashboard) if the water reach the warning level. It is especially undesirable for water to be drawn into a diesel engine fuel system, as the system relies on the diesel for lubrication
Lubrication
Lubrication is the process, or technique employed to reduce wear of one or both surfaces in close proximity, and moving relative to each another, by interposing a substance called lubricant between the surfaces to carry or to help carry the load between the opposing surfaces. The interposed...
of the moving parts, and if water gets into a moving part which requires constant lubrication (for example an injector valve), it will quickly cause overheating
Overheating
Overheating may refer to:*Hyperthermia, also called sunstroke, an elevated body temperature due to failed thermoregulation*Thermal shock, the overheating of a device leading to reduced efficiency, damage or even destruction...
and unnecessary wear. This type of filter may also include a sensor
Sensor
A sensor is a device that measures a physical quantity and converts it into a signal which can be read by an observer or by an instrument. For example, a mercury-in-glass thermometer converts the measured temperature into expansion and contraction of a liquid which can be read on a calibrated...
, which will alert the operator when the filter needs to be drained.
In proximity of the diesel fuel filter there might be a fuel heater to avoid the forming of paraffin wax
Paraffin
In chemistry, paraffin is a term that can be used synonymously with "alkane", indicating hydrocarbons with the general formula CnH2n+2. Paraffin wax refers to a mixture of alkanes that falls within the 20 ≤ n ≤ 40 range; they are found in the solid state at room temperature and begin to enter the...
(in case of low temperatures) inside the filtrating element which can stop the fuel flow to the engine.