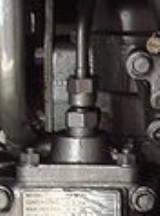 "Fuel pump" should not be confused with fuel dispenser
Fuel dispenser
A fuel dispenser is a machine at a filling station that is used to pump gasoline, diesel, CNG, CGH2, HCNG, LPG, LH2, ethanol fuel, biofuels like biodiesel, kerosene, or other types of fuel into vehicles...
, a device that dispenses fuel into an automobile.

Vehicle shuts down while driving. no electrical shut down. let vehicle sett for 10-15 minutes starts and off I go. I think its a fuel pump problem or ...
More

"Fuel pump" should not be confused with fuel dispenser
Fuel dispenser
A fuel dispenser is a machine at a filling station that is used to pump gasoline, diesel, CNG, CGH2, HCNG, LPG, LH2, ethanol fuel, biofuels like biodiesel, kerosene, or other types of fuel into vehicles...
, a device that dispenses fuel into an automobile.

Prior to the widespread adoption of electronic fuel injection
Fuel injection
Fuel injection is a system for admitting fuel into an internal combustion engine. It has become the primary fuel delivery system used in automotive petrol engines, having almost completely replaced carburetors in the late 1980s....
, most carbureted automobile engines used mechanical fuel pumps to transfer fuel from the fuel tank into the fuel bowls of the carburetor. Most mechanical fuel pumps are diaphragm pumps, which are a type of positive displacement pump. Diaphragm pump
Diaphragm pump
A diaphragm pump is a positive displacement pump that uses a combination of the reciprocating action of a rubber, thermoplastic or teflon diaphragm and suitable non-return check valves to pump a fluid...
s contain a pump chamber whose volume is increased or decreased by the flexing of a flexible diaphragm, similar to the action of a piston pump. A check valve
Check valve
A check valve, clack valve, non-return valve or one-way valve is a mechanical device, a valve, which normally allows fluid to flow through it in only one direction....
is located at both the inlet and outlet ports of the pump chamber to force the fuel to flow in one direction only. Specific designs vary, but in the most common configuration, these pumps are typically bolted onto the engine block or head, and the engine's camshaft has an extra eccentric
Eccentric (mechanism)
In mechanical engineering, an eccentric is a circular disk solidly fixed to a rotating axle with its centre offset from that of the axle ....
lobe that operates a lever on the pump, either directly or via a pushrod, by pulling the diaphragm to bottom dead center. In doing so, the volume inside the pump chamber increased, causing pressure to decrease.This allows fuel to be pushed into the pump from the tank (caused by atmospheric pressure acting on the fuel in the tank). The return motion of the diaphragm to top dead center is accomplished by a diaphragm spring, during which the fuel in the pump chamber is squeezed through the outlet port and into the carburetor. The pressure at which the fuel is expelled from the pump is thus limited (and therefore regulated) by the force applied by the diaphragm spring.

Because one side of the pump diaphragm contains fuel under pressure and the other side is connected to the crankcase
Crankcase
In an internal combustion engine of the reciprocating type, the crankcase is the housing for the crankshaft. The enclosure forms the largest cavity in the engine and is located below the cylinder, which in a multicylinder engine are usually integrated into one or several cylinder blocks...
of the engine, if the diaphragm splits (a common failure), it can leak fuel into the crankcase.

The pump creates negative pressure to draw the fuel through the lines. However, the low pressure between the pump and the fuel tank, in combination with heat from the engine
Engine
An engine or motor is a machine designed to convert energy into useful mechanical motion. Heat engines, including internal combustion engines and external combustion engines burn a fuel to create heat which is then used to create motion...
and/or hot weather, can cause the fuel to vaporize in the supply line. This results in fuel starvation as the fuel pump, designed to pump liquid, not vapor, is unable to suck more fuel to the engine, causing the engine to stall. This condition is different from vapor lock, where high engine heat on the pressured side of the pump (between the pump and the carburetor) boils the fuel in the lines, also starving the engine of enough fuel to run. Mechanical automotive fuel pumps generally do not generate much more than 10-15 psi, which is more than enough for most carburetors.

As engines moved away from carburetors and towards fuel injection, mechanical fuel pumps were replaced with electric fuel pumps, because fuel injection systems operate more efficiently at higher fuel pressures (40-60psi) than mechanical diaphragm pumps can generate. Electric fuel pumps are generally located in the fuel tank, in order to use the fuel in the tank to cool the pump and to ensure a steady supply of fuel.

Another benefit of an in-tank mounted fuel pump is that a suction pump at the engine could suck in air through a (difficult to diagnose) faulty hose connection, while a leaking connection in a pressure line will show itself immediately. A potential hazard of a tank-mounted fuel pump is that all of the fuel lines are under high pressure, from the tank to the engine. Any leak will be easily detected, but is also hazardous.

Electric fuel pumps will run whenever they are switched on, which can lead to extremely dangerous situations if there is a leak due to mechanical fault or an accident. Mechanical fuel pumps are much safer, due to their lower operating pressures and because they 'turn off' when the engine stops running.

In many modern cars the fuel pump is usually electric and located inside the fuel tank
Fuel tank
A fuel tank is safe container for flammable fluids. Though any storage tank for fuel may be so called, the term is typically applied to part of an engine system in which the fuel is stored and propelled or released into an engine...
. The pump creates positive pressure in the fuel lines, pushing the gasoline to the engine. The higher gasoline pressure raises the boiling point. Placing the pump in the tank puts the component least likely to handle gasoline vapor well (the pump itself) farthest from the engine, submersed in cool liquid. Another benefit to placing the pump inside the tank is that it is less likely to start a fire. Though electrical components (such as a fuel pump) can spark and ignite fuel vapors, liquid fuel will not explode (see explosive limit) and therefore submerging the pump in the tank is one of the safest places to put it. In most cars, the fuel pump delivers a constant flow of gasoline to the engine; fuel not used is returned to the tank. This further reduces the chance of the fuel boiling, since it is never kept close to the hot engine for too long.

The ignition switch does not carry the power to the fuel pump; instead, it activates a relay which will handle the higher current load. It is common for the fuel pump relay to become oxidized and cease functioning; this is much more common than the actual fuel pump failing. Modern engines utilize solid-state control which allows the fuel pressure to be controlled via pulse-width modulation of the pump voltage. This increases the life of the pump, allows a smaller and lighter device to be used, and reduces electrical load.

Cars with electronic fuel injection have an electronic control unit
Electronic control unit
In automotive electronics, electronic control unit is a generic term for any embedded system that controls one or more of the electrical systems or subsystems in a motor vehicle....
(ECU) and this may be programmed with safety logic
Logic
In philosophy, Logic is the formal systematic study of the principles of valid inference and correct reasoning. Logic is used in most intellectual activities, but is studied primarily in the disciplines of philosophy, mathematics, semantics, and computer science...
that will shut the electric fuel pump off, even if the engine is running. In the event of a collision this will prevent fuel leaking from any ruptured fuel line. Additionally, cars may have an inertia switch (usually located underneath the front passenger seat) that is "tripped" in the event of an impact, or a roll-over valve that will shut off the fuel pump in case the car rolls over.

Some ECUs may also be programmed to shut off the fuel pump if they detect low or zero oil pressure, for instance if the engine has suffered a terminal failure (with the subsequent risk of fire in the engine compartment).

The fuel sending unit assembly may be a combination of the electric fuel pump, the filter, and the electronic device used to measure the amount of fuel in the tank via a float attached to a sensor which sends data to the dash-mounted fuel gauge
Fuel gauge
A fuel gauge is an instrument used to indicate the level of fuel contained in a tank. Commonly used in cars, these may also be used for any tank including underground storage tanks.As used in cars, the gauge consists of two parts:...
.

Many jet engine
Jet engine
A jet engine is a reaction engine that discharges a fast moving jet to generate thrust by jet propulsion and in accordance with Newton's laws of motion. This broad definition of jet engines includes turbojets, turbofans, rockets, ramjets, pulse jets...
s, including rocket engine
Rocket engine
A rocket engine, or simply "rocket", is a jet engineRocket Propulsion Elements; 7th edition- chapter 1 that uses only propellant mass for forming its high speed propulsive jet. Rocket engines are reaction engines and obtain thrust in accordance with Newton's third law...
s use a turbopump
Turbopump
A turbopump is a gas turbine that comprises basically two main components: a rotodynamic pump and a driving turbine, usually both mounted on the same shaft, or sometimes geared together...
which is a centrifugal pump usually propelled by a gas turbine or in some cases a ram-air device (particularly in ramjet engines which lack a shaft).
The source of this article is wikipedia, the free encyclopedia.  The text of this article is licensed under the GFDL.