Encyclopedia
BMW Headquarters is a Munich
Munich
Munich The city's motto is "" . Before 2006, it was "Weltstadt mit Herz" . Its native name, , is derived from the Old High German Munichen, meaning "by the monks' place". The city's name derives from the monks of the Benedictine order who founded the city; hence the monk depicted on the city's coat...
landmark, which has been serving as world headquarters for the Bavaria
Bavaria
Bavaria, formally the Free State of Bavaria is a state of Germany, located in the southeast of Germany. With an area of , it is the largest state by area, forming almost 20% of the total land area of Germany...
n automaker for over 30 years. It was declared a protected historic building in 1999. Extensive refurbishments commenced in 2004 and were completed in 2006.

The Tower was built between 1968 and 1972 and was ready just in time for 1972 Summer Olympics
1972 Summer Olympics
The 1972 Summer Olympics, officially known as the Games of the XX Olympiad, were an international multi-sport event held in Munich, West Germany, from August 26 to September 11, 1972....
. Its inauguration followed on 18 May 1973. The 101 m (roughly 331 feet) building is located near the Olympic Village
Olympic Village
An Olympic Village is an accommodation centre built for an Olympic Games, usually within an Olympic Park or elsewhere in a host city. Olympic Villages are built to house all participating athletes, as well as officials, athletic trainers, and other staff. Since the Munich Massacre at the 1972...
and is often cited as one of the most notable examples of architecture in Munich. The large cathedral
Cathedral
A cathedral is a Christian church that contains the seat of a bishop...
exterior is supposed to mimic the shape of a tire
Tire
A tire or tyre is a ring-shaped covering that fits around a wheel rim to protect it and enable better vehicle performance by providing a flexible cushion that absorbs shock while keeping the wheel in close contact with the ground...
in a race car, with the garage representing the cylinder head
Cylinder head
In an internal combustion engine, the cylinder head sits above the cylinders on top of the cylinder block. It closes in the top of the cylinder, forming the combustion chamber. This joint is sealed by a head gasket...
. Both buildings were designed by the Austrian architect
Architect
An architect is a person trained in the planning, design and oversight of the construction of buildings. To practice architecture means to offer or render services in connection with the design and construction of a building, or group of buildings and the space within the site surrounding the...
Karl Schwanzer
Karl Schwanzer
Karl Schwanzer was an Austrian architect. He was an important figure of post-war architecture.-Life:...
.

The main tower consists of four vertical cylinders standing next to and across from each other. Each cylinder is divided horizontally in its center by a mold
Molding (process)
Molding or moulding is the process of manufacturing by shaping pliable raw material using a rigid frame or model called a pattern....
in the facade
Facade
A facade or façade is generally one exterior side of a building, usually, but not always, the front. The word comes from the French language, literally meaning "frontage" or "face"....
. Notably, these cylinders do not stand on the ground, they are suspended on a central support tower. During the construction, individual floors were assembled on the ground and then elevated. The tower has a diameter of 52.30 meters (roughly 171 feet). The building has 22 occupied floors, two of which are basements and 18 serve as office space
Office
An office is generally a room or other area in which people work, but may also denote a position within an organization with specific duties attached to it ; the latter is in fact an earlier usage, office as place originally referring to the location of one's duty. When used as an adjective, the...
.

During the 1972 Summer Olympics
1972 Summer Olympics
The 1972 Summer Olympics, officially known as the Games of the XX Olympiad, were an international multi-sport event held in Munich, West Germany, from August 26 to September 11, 1972....
BMW branding was removed from the buildings to prevent product placement
Product placement
Product placement, or embedded marketing, is a form of advertisement, where branded goods or services are placed in a context usually devoid of ads, such as movies, music videos, the story line of television shows, or news programs. The product placement is often not disclosed at the time that the...
. BMW badging was also removed from the 2002 sedans, which accompanied Olympic
Olympic Games
The Olympic Games is a major international event featuring summer and winter sports, in which thousands of athletes participate in a variety of competitions. The Olympic Games have come to be regarded as the world’s foremost sports competition where more than 200 nations participate...
marathon runners during the competition. The branding was removed again for the building's cameo appearance in the 1975 film Rollerball
Rollerball (1975 film)
Rollerball is a 1975 American dystopian fiction film directed by Norman Jewison from a screenplay by William Harrison, who adapted his own short story "Roller Ball Murder", which first appeared in 1973 in Esquire magazine.-The Game:...
, replaced by large orange circles, meant to stand for the fictional ruling Energy Corporation of the future.

The BMW Museum
BMW Museum
The BMW Museum is located near the Olympiapark in Munich and was established in 1972 shortly before the Summer Olympics opened. It deals with the history of the automobile manufacturer BMW. In connection with the construction of the BMW Welt, directly opposite the museum, it was renovated from 2004...
is located right next to the tower while BMW Welt
BMW Welt
BMW Welt , is a multi-functional customer experience and exhibition facility of the BMW AG, located in Munich, Germany...
, which showcases the current cars of BMW and acts as a distribution centre, opened on the opposite side of the road on October 17, 2007. 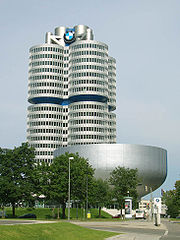