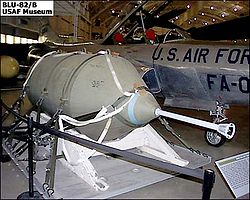 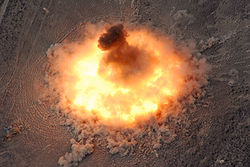 The BLU-82B/C-130 weapon system, known under program "Commando Vault" and nicknamed "daisy cutter
Daisy cutter (fuse)
A daisy cutter is a type of fuse designed to detonate an aerial bomb at or above ground level. The fuse itself is a long probe affixed to the weapon's nose, which detonates the bomb if it touches the ground or any solid object....
" in Vietnam
Vietnam War
The Vietnam War was a Cold War-era military conflict that occurred in Vietnam, Laos, and Cambodia from 1 November 1955 to the fall of Saigon on 30 April 1975. This war followed the First Indochina War and was fought between North Vietnam, supported by its communist allies, and the government of...
and in Afghanistan
War in Afghanistan (2001–present)
The War in Afghanistan began on October 7, 2001, as the armed forces of the United States of America, the United Kingdom, Australia, and the Afghan United Front launched Operation Enduring Freedom...
for its ability to flatten a forest into a helicopter landing zone, is a 15,000 pound (6,800 kg) conventional bomb
Bomb
A bomb is any of a range of explosive weapons that only rely on the exothermic reaction of an explosive material to provide an extremely sudden and violent release of energy...
, delivered from either a C-130 or an MC-130 transport aircraft. 225 were constructed. The BLU-82 was retired in 2008 and replaced with the more powerful MOAB
Moab
Moab is the historical name for a mountainous strip of land in Jordan. The land lies alongside much of the eastern shore of the Dead Sea. The existence of the Kingdom of Moab is attested to by numerous archeological findings, most notably the Mesha Stele, which describes the Moabite victory over...
.

Originally designed to create an instant clearing in the jungles of Vietnam, the BLU-82B/C-130 was test-dropped there from a CH-54 Tarhe
CH-54 Tarhe
|-See also:-External links:* *...
"Flying crane" helicopter. Later it was used in Afghanistan as an anti-personnel weapon and as an intimidation weapon because of its very large lethal radius (variously reported as 300 to 900 feet/100 to 300 meters) combined with a visible flash and audible sound at long distances. It is one of the largest conventional weapons ever to be used, outweighed only by a few earth quake bombs, thermobaric bombs, and demolition (bunker buster
Bunker buster
A bunker buster is a bomb designed to penetrate hardened targets or targets buried deep underground.-Germany:Röchling shells were bunker-busting artillery shells, developed by German engineer August Cönders, based on the theory of increasing sectional density to improve penetration.They were tested...
) bombs. Some of these include the Grand Slam
Grand Slam bomb
The Grand Slam was a 22,000 lb earthquake bomb used by RAF Bomber Command against strategic targets during the Second World War.Known officially as the Bomb, Medium Capacity, 22,000 lb, it was a scaled up version of the Tallboy bomb and closer to the original size that the bombs' inventor,...
and T12 earthquake bombs of late World War II, and more currently, the Russian Air Force
Russian Air Force
The Russian Air Force is the air force of Russian Military. It is currently under the command of Colonel General Aleksandr Zelin. The Russian Navy has its own air arm, the Russian Naval Aviation, which is the former Soviet Aviatsiya Voyenno Morskogo Flota , or AV-MF).The Air Force was formed from...
FOAB and USAF GBU-43/B Massive Ordnance Air Blast bomb
GBU-43/B Massive Ordnance Air Blast bomb
The GBU-43/B Massive Ordnance Air Blast bomb is a large-yield conventional bomb developed for the United States military by Albert L. Weimorts, Jr. At the time of development, it was touted as the most powerful non-nuclear weapon ever designed...
, and the Massive Ordnance Penetrator
Massive Ordnance Penetrator
The Massive Ordnance Penetrator GBU-57A/B is a project by the U.S. Air Force to develop a massive, precision-guided, "bunker buster" bomb...
.

The BLU-82 uses conventional explosive ammonium nitrate and aluminum, incorporating both agent and oxidizer. In contrast, fuel-air explosive
Fuel-air explosive
A fuel-air explosive device consists of a container of fuel and two separate explosive charges. After the munition is dropped or fired, the first explosive charge bursts open the container at a predetermined height and disperses the fuel in a cloud that mixes with atmospheric oxygen...
s (FAE) consist only of an agent and a dispersing mechanism, and take their oxidizers from the oxygen in the air. FAEs generally run between 500 and 2,000 pounds (225 and 900 kg); making an FAE the size of a daisy cutter would be difficult because the correct uniform mixture of agent with ambient air would be difficult to maintain if the agent were so widely dispersed. Thus, the conventional explosive of a daisy cutter is more reliable than that of an FAE, particularly if there is significant wind or thermal gradient.

This system depends upon the accurate positioning of the aircraft by either a fixed ground radar
Radar
Radar is an object-detection system which uses radio waves to determine the range, altitude, direction, or speed of objects. It can be used to detect aircraft, ships, spacecraft, guided missiles, motor vehicles, weather formations, and terrain. The radar dish or antenna transmits pulses of radio...
or on-board navigation equipment. The ground radar controller, or aircrew navigator if applicable, is responsible for positioning the aircraft prior to final countdown and release. Primary aircrew considerations include accurate ballistic and wind computations provided by the navigator, and precision instrument flying with strict adherence to controller instructions. Due to its extremely powerful blast effects, the minimum safe altitude for releasing this weapon is 6,000 feet (1,800 m) above ground level (AGL). The warhead contains 12,600 pounds (5,700 kg) of low-cost GSX slurry
Slurry
A slurry is, in general, a thick suspension of solids in a liquid.-Examples of slurries:Examples of slurries include:* Lahars* A mixture of water and cement to form concrete* A mixture of water, gelling agent, and oxidizers used as an explosive...
(ammonium nitrate, aluminum powder and polystyrene
Polystyrene
Polystyrene ) also known as Thermocole, abbreviated following ISO Standard PS, is an aromatic polymer made from the monomer styrene, a liquid hydrocarbon that is manufactured from petroleum by the chemical industry...
) and is detonated just above ground level by a 38-inch (965 mm) fuze
Fuze
Fuze Beverage, commercially referred to as just Fuze , is a manufacturer of teas and non-carbonated fruit drinks enriched with vitamins. Currently the brand consists of five vitamin-infused lines: Slenderize, Refresh, Tea, Defensify, and Vitalize...
extender, optimized for destruction at ground level without digging a crater
Impact crater
In the broadest sense, the term impact crater can be applied to any depression, natural or manmade, resulting from the high velocity impact of a projectile with a larger body...
. When detonated, this weapon produces an overpressure of 1,000 pounds per square inch (psi) (7 MPa) near ground zero, tapering off as distance increases.

The BLU-82 was originally designed to clear helicopter landing zones and artillery
Artillery
Originally applied to any group of infantry primarily armed with projectile weapons, artillery has over time become limited in meaning to refer only to those engines of war that operate by projection of munitions far beyond the range of effect of personal weapons...
emplacements in Vietnam. South Vietnamese VNAF aircraft dropped BLU-82 bombs on NVA positions in desperation to support ARVN troops in the Battle of Xuan Loc
Battle of Xuan Loc
The Battle of Xuan Loc was the last major battle of the Vietnam War. The battle was fought between April 9–21, 1975, and ended when the town of Xuan Loc was overrun by the North Vietnamese 4th Army Corps....
in the last days of the Vietnam War.

Eleven BLU-82Bs were palletized and dropped in five night missions during the 1991 Gulf War
Gulf War
The Persian Gulf War , commonly referred to as simply the Gulf War, was a war waged by a U.N.-authorized coalition force from 34 nations led by the United States, against Iraq in response to Iraq's invasion and annexation of Kuwait.The war is also known under other names, such as the First Gulf...
, all from Special Operations
Special operations
Special operations are military operations that are considered "special" .Special operations are typically performed independently or in conjunction with conventional military operations. The primary goal is to achieve a political or military objective where a conventional force requirement does...
MC-130 Combat Talon
MC-130 Combat Talon
The Lockheed MC-130 is the basic designation for a family of special mission aircraft operated by the United States Air Force Special Operations Command , a wing of the Air Education and Training Command, and an AFSOC-gained wing of the Air Force Reserve Command...
s. The initial drop tested the ability of the bomb to clear or breach mine fields; however, no reliable assessments of mine clearing effectiveness are publicly available. Later, bombs were dropped as much for their psychological effect as for their anti-personnel effects.

The US Air Force
United States Air Force
The United States Air Force is the aerial warfare service branch of the United States Armed Forces and one of the American uniformed services. Initially part of the United States Army, the USAF was formed as a separate branch of the military on September 18, 1947 under the National Security Act of...
dropped several BLU-82s during the campaign to destroy Taliban and al-Qaeda
Al-Qaeda
Al-Qaeda is a global broad-based militant Islamist terrorist organization founded by Osama bin Laden sometime between August 1988 and late 1989. It operates as a network comprising both a multinational, stateless army and a radical Sunni Muslim movement calling for global Jihad...
bases in Afghanistan to attack and demoralize personnel and to destroy underground and cave complexes. American forces began using the bomb in November 2001 and again a month later during the Battle of Tora Bora
Battle of Tora Bora
The Battle of Tora Bora was a military engagement that took place in Afghanistan in December 2001, during the opening stages of the war in that country launched following the 9/11 attacks on the United States. The U.S...
. On 15 July 2008, airmen from the Duke Field
Duke Field
Duke Field , also known as Eglin AFB Auxiliary Field #3, is a military airport located three miles south of the central business district of Crestview, in Okaloosa County, Florida, United States-Units:...
711th Special Operations Squadron, 919th Special Operations Wing
919th Special Operations Wing
The 919th Special Operations Wing is an Air Force Reserve Command wing of the United States Air Force, operationally-gained by the Air Force Special Operations Command and based at Eglin AFB Auxiliary Field #3 / Duke Field, Florida.-Mission:The 919 SOW provides and maintains the MC-130E Combat...
dropped the last operational BLU-82 at the Utah Test and Training Range.