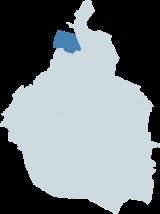 The historic center of this borough was designated as a "Barrio Mágico"
Barrios Mágicos of Mexico City
The “Barrios Mágicos” of Mexico City is a list of twenty one areas in the Federal District, which have been named “magical neighborhoods” in order to attract tourism to them. The program is sponsored by the city government but is patterned after the “Pueblos Mágicos” program of the Mexican...
by the city in 2011.

Much of the Spanish Colonial Style architecture is still in use in Azcapotzalco; of particular note is the Church of St. James and St. Philip, with its chapel of the Virgin of Rosario and the associated Dominican
Dominican Order
The Order of Preachers , after the 15th century more commonly known as the Dominican Order or Dominicans, is a Catholic religious order founded by Saint Dominic and approved by Pope Honorius III on 22 December 1216 in France...
monastery.

The chapel contains the following altarpieces:

The chapel of the Virgin of Rosario often is compared to the chapels of Puebla and Oaxaca as the best examples of Spanish colonial church architecture and decoration.

Between 1881-1882, president Manuel González intensified a colonization project all over the country. He brought thousands of Italians to the country and in the Colonia Aldana he colonized it with northern Italians, mainly from Lombardy
Lombardy
Lombardy is one of the 20 regions of Italy. The capital is Milan. One-sixth of Italy's population lives in Lombardy and about one fifth of Italy's GDP is produced in this region, making it the most populous and richest region in the country and one of the richest in the whole of Europe...
, Trentino, and Piedmont
Piedmont
Piedmont is one of the 20 regions of Italy. It has an area of 25,402 square kilometres and a population of about 4.4 million. The capital of Piedmont is Turin. The main local language is Piedmontese. Occitan is also spoken by a minority in the Occitan Valleys situated in the Provinces of...
. It was one of the most prosperous colonies in the country, but in the early 1900s the urbananization growth of Mexico City reached the colony and absorbed it. Today some families still retain their Italian identity with restaurants and bakeries. This could be considered Mexico City's Little Italy
Little Italy
Little Italy is a general name for an ethnic enclave populated primarily by Italians or people of Italian ancestry, usually in an urban neighborhood.-Canada:*Little Italy, Edmonton, in Alberta*Little Italy, Montreal, in Quebec...
. The Italian district in Mexico City.
Between 1910 and 1920, Mexico City's character was largely influenced by President Porfirio Díaz
Porfirio Díaz
José de la Cruz Porfirio Díaz Mori was a Mexican-American War volunteer and French intervention hero, an accomplished general and the President of Mexico continuously from 1876 to 1911, with the exception of a brief term in 1876 when he left Juan N...
. During this period, several of the city's suburbs were known by different names, for example: The American Suburb (now Zona Rosa
Zona Rosa
Zona Rosa is a neighborhood in Mexico City which is known for its shopping, nightlife, gay community, and its recently established Korean community...
), Centro Suburb (now Historic Centre), Roma Suburb (Colonia Roma
Colonia Roma
Colonia Roma is a colonia or neighborhood located in the Cuauhtémoc borough of Mexico City just west of the city’s historic center. The area was a very shallow part of Lake Texcoco, dotted with tiny islands and one small island village of Aztacalco during the pre-Hispanic period...
), Chapultepec Forest Area (now Bosque de Chapultepec
Chapultepec
Chapultepec Park, more commonly called the "Bosque de Chapultepec" in Mexico City, is the largest city park in Latin America, measuring in total just over 686 hectares. Centered on a rock formation called Chapultepec Hill, one of the park's main functions is to be an ecological space in the vast...
and Lomas de Chapultepec
Las Lomas
Las Lomas is the common name of a residential district in Mexico City located in the delegación of Miguel Hidalgo. Its real name is Lomas de Chapultepec and dates back from around 1930, when it was founded with the name Chapultepec Heights. Home to some of the biggest mansions and wealthiest...
), San Ángel
San Ángel
San Ángel is a colonia or neighborhood of Mexico City, located in the southwest in Álvaro Óbregon borough. Historically, it was a rural community, called Tenanitla in the pre Hispanic period. Its current name is derived from the El Carmen monastery school called San Ángel Mártir...
(now San Ángel Inn
San Ángel Inn
San Angel Inn is an old Carmelite monastery which was turned into a well-known restaurant. It is located to the southwest of Mexico City, in the historic neighborhood of San Ángel in the borough of Álvaro Obregón. It is famous for its international cuisine, variety of dishes, its Mexican-colonial...
), Hacienda de los Morales (now Polanco (Mexico)
Polanco (Mexico)
Polanco is the name that usually refers to a group of seven official neighborhoods in Mexico City, located north of Chapultepec Park. The official names of the neighborhoods are: Los Morales , Del Bosque, Polanco Reforma, Polanco Chapultepec, Chapultepec Morales, Bosque de Chapultepec and...
) and Azcapotzalco (now Azcapotzalco) were considered glamorous and luxurious areas.

On Azcapotzalco Avenue, elegant Beaux-Arts architecture houses were built, and a very European atmosphere existed (still present to some extent today). President Díaz enjoyed visiting the suburb because, as he would say, "Azcapotzalco is the place where I have a still day". During this period, Azcapotzalco was known as Porfirio Díaz's Azcapotzalco.

Azcapotzalco changed dramatically in the 20th century; urban sprawl led many of Mexico City's suburbs to become absorbed into the city.