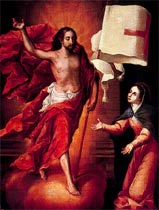 
Juan Correa (1646–1716) was a Mexican
Mexico
The United Mexican States , commonly known as Mexico , is a federal constitutional republic in North America. It is bordered on the north by the United States; on the south and west by the Pacific Ocean; on the southeast by Guatemala, Belize, and the Caribbean Sea; and on the east by the Gulf of...
painter of mixed Moorish or African, Indian and Spanish heritage. His years of greatest activity were from 1671 to 1716. He painted many religious-themed, Baroque
Baroque
The Baroque is a period and the style that used exaggerated motion and clear, easily interpreted detail to produce drama, tension, exuberance, and grandeur in sculpture, painting, literature, dance, and music...
paintings for cathedrals in Mexico. Correa was José de Ibarra's
José de Ibarra
José de Ibarra was a Mexican painter. He was born in Guadalajara, Mexico and died 21 Nov 1756 in Mexico City. He was a student of painter Juan Correa. Many of his pieces are preserved in Mexican museums and the Metropolitan Cathedral in Mexico City. He was one of the most prolific painters of...
teacher. Correa, along with contemporaries Miguel Cabrera
Miguel Cabrera (painter)
Miguel Mateo Maldonado y Cabrera was an indigenous Zapotec painter during the Viceroyalty of New Spain, today's Mexico. During his lifetime, he was recognized as the greatest painter in all of New Spain....
and Cristóbal de Villalpando
Cristóbal de Villalpando
Cristóbal de Villalpando was a Mexican painter. He painted prolifically and produced many Baroque works visible in several Mexican cathedrals, including the cathedrals in Querétaro and Mexico City.. He married María de Mendoza in 1669, and later had four children.-References:...
are important examples of 18th century Mexican Baroque painting.
The source of this article is wikipedia, the free encyclopedia.  The text of this article is licensed under the GFDL.