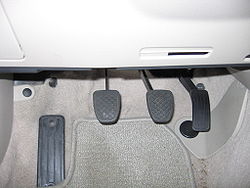 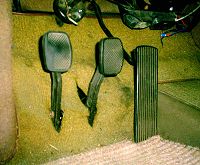 An automobile
Automobile
An automobile, autocar, motor car or car is a wheeled motor vehicle used for transporting passengers, which also carries its own engine or motor...
may have two to four foot pedals. The arrangement is the same for both right- and left-hand traffic. From left to right:

Some vehicles have a parking brake pedal instead of a hand brake
Hand brake
In cars, the hand brake is a latching brake usually used to keep the car stationary, and in manual transmission vehicles, as an aid to starting the vehicle from stopped when going up an incline - with one foot on the clutch , the other on the accelerator In cars, the hand brake (emergency brake,...
lever. Pedals can be either 'hanging' from the firewall (bulkhead
Bulkhead (partition)
A bulkhead is an upright wall within the hull of a ship or within the fuselage of an airplane. Other kinds of partition elements within a ship are decks and deckheads.-Etymology:...
) or 'standing' on the floor.

Since the right foot is normally used (for the accelerator or brake) there is no foot rest on the right, not even in cars with cruise control
Cruise control
Cruise control is a system that automatically controls the speed of a motor vehicle. The system takes over the throttle of the car to maintain a steady speed as set by the driver.-History:...
. The left foot only has to operate the clutch intermittently (or has no function in an automatic vehicle) so sometimes a foot rest is provided to the left of the pedals. Some drivers practice left-foot braking
Left-foot braking
Left-foot braking is the technique of using the left foot to operate the brake pedal in an automobile, leaving the right foot dedicated to the throttle pedal...
, however.

Many cars now include pedals with electric adjustment, a modern iteration of a manual adjustment system available sporadically since the 1950s.

Heavy vehicles on caterpillar tracks such as bulldozer
Bulldozer
A bulldozer is a crawler equipped with a substantial metal plate used to push large quantities of soil, sand, rubble, etc., during construction work and typically equipped at the rear with a claw-like device to loosen densely-compacted materials.Bulldozers can be found on a wide range of sites,...
s or tanks may have two brake pedals; for the left and right side tracks respectively. These vehicles do not have a clutch pedal but two manually operated levers - the clutches and brakes are used for differential steering
Steering
Steering is the term applied to the collection of components, linkages, etc. which will allow a vessel or vehicle to follow the desired course...
.

In a bulldozer the gas pedal operates in an opposite way to an automobile; depressed pedal = idle, released pedal = full open throttle.

A twin engined wheel tractor-scraper
Wheel tractor-scraper
In civil engineering, a wheel tractor-scraper is a piece of heavy equipment used for earthmoving.The rear part has a vertically moveable hopper with a sharp horizontal front edge. The hopper can be hydraulically lowered and raised. When the hopper is lowered, the front edge cuts into the soil or...
has two gas pedals next to each other; one for the front engine and one for the rear engine.
The source of this article is wikipedia, the free encyclopedia.  The text of this article is licensed under the GFDL.