Encyclopedia
Atmospheric thermodynamics is the study of heat
Heat
In physics and thermodynamics, heat is energy transferred from one body, region, or thermodynamic system to another due to thermal contact or thermal radiation when the systems are at different temperatures. It is often described as one of the fundamental processes of energy transfer between...
to work transformations (and the reverse) in the earth’s atmospheric system in relation to weather or climate. Following the fundamental laws of classical thermodynamics, atmospheric thermodynamics studies such phenomena as properties of moist air, formation of clouds, atmospheric convection, boundary layer meteorology, and vertical stabilities in the atmosphere. Atmospheric thermodynamic diagrams
Thermodynamic diagrams
Thermodynamic diagrams are diagrams used by scientists and engineers to represent the thermodynamic states of a material and the consequences of manipulating this material...
are used as tools in the forecasting of storm development. Atmospheric thermodynamics forms a basis for cloud microphysics and convection parameterizations
Parametrization (climate)
Parameterization in a weather or climate model within numerical weather prediction refers to the method of replacing processes that are too small-scale or complex to be physically represented in the model by a simplified process. This can be contrasted with other processes—e.g., large-scale flow of...
in numerical weather models, and is used in many climate considerations, including convective-equilibrium climate models.

Atmospheric thermodynamics focuses on water and its transformations. Areas of study include the law of energy conservation, the ideal gas law
Ideal gas law
The ideal gas law is the equation of state of a hypothetical ideal gas. It is a good approximation to the behavior of many gases under many conditions, although it has several limitations. It was first stated by Émile Clapeyron in 1834 as a combination of Boyle's law and Charles's law...
, specific heat capacities, adiabatic processes (in which entropy
Entropy
Entropy is a thermodynamic property that can be used to determine the energy available for useful work in a thermodynamic process, such as in energy conversion devices, engines, or machines. Such devices can only be driven by convertible energy, and have a theoretical maximum efficiency when...
is conserved), and moist adiabatic processes. Most of tropospheric gases are treated as ideal gases and water vapor
Water vapor
Water vapor or water vapour , also aqueous vapor, is the gas phase of water. It is one state of water within the hydrosphere. Water vapor can be produced from the evaporation or boiling of liquid water or from the sublimation of ice. Under typical atmospheric conditions, water vapor is continuously...
is considered as one of the most important trace components of air.

Advanced topics are phase transitions of water, homogeneous and inhomogeneous nucleation, effect of dissolved substances on cloud condensation, role of supersaturation on formation of ice crystals and cloud droplets. Considerations of moist air and cloud theories typically involve various temperatures, such as equivalent potential temperature, wet-bulb and virtual temperatures. Connected areas are energy, momentum, and mass transfer
Mass transfer
Mass transfer is the net movement of mass from one location, usually meaning a stream, phase, fraction or component, to another. Mass transfer occurs in many processes, such as absorption, evaporation, adsorption, drying, precipitation, membrane filtration, and distillation. Mass transfer is used...
, turbulence interaction between air particles in clouds, convection, dynamics of tropical cyclones, and large scale dynamics of the atmosphere.

The major role of atmospheric thermodynamics is expressed in terms of adiabatic and diabatic forces acting on air parcel
Air parcel
In fluid dynamics, within the framework of continuum mechanics, a fluid parcel is a very small amount of fluid, identifiable throughout its dynamic history while moving with the fluid flow. As it moves, the mass of a fluid parcel remains constant, while—in a compressible flow—its volume may...
s included in primitive equations
Primitive equations
The primitive equations are a set of nonlinear differential equations that are used to approximate global atmospheric flow and are used in most atmospheric models...
of air motion either as grid resolved or subgrid parameterizations. These equations form a basis for the numerical weather and climate predictions.

In the early 19th century thermodynamicists such as Sadi Carnot
Nicolas Léonard Sadi Carnot
Nicolas Léonard Sadi Carnot was a French military engineer who, in his 1824 Reflections on the Motive Power of Fire, gave the first successful theoretical account of heat engines, now known as the Carnot cycle, thereby laying the foundations of the second law of thermodynamics...
, Rudolf Clausius
Rudolf Clausius
Rudolf Julius Emanuel Clausius , was a German physicist and mathematician and is considered one of the central founders of the science of thermodynamics. By his restatement of Sadi Carnot's principle known as the Carnot cycle, he put the theory of heat on a truer and sounder basis...
, and Emile Clapeyron developed mathematical models on the dynamics of bodies fluids and vapors related to the combustion and pressure cycles of atmospheric steam engines; one example is the Clausius-Clapeyron equation. In 1873, thermodynamicist Willard Gibbs published "Graphical Methods in the Thermodynamics of Fluids."

These sorts of foundations naturally began to be applied towards the development of theoretical models of atmospheric thermodynamics which drew the attention of the best minds. Papers on atmospheric thermodynamics appeared in the 1860s that treated such topics as dry and moist adiabatic process
Adiabatic process
In thermodynamics, an adiabatic process or an isocaloric process is a thermodynamic process in which the net heat transfer to or from the working fluid is zero. Such a process can occur if the container of the system has thermally-insulated walls or the process happens in an extremely short time,...
es. In 1884 Heinrich Hertz
Heinrich Rudolf Hertz
Heinrich Rudolf Hertz was a German physicist who clarified and expanded the electromagnetic theory of light that had been put forth by Maxwell...
devised first atmospheric thermodynamic diagram (emagram
Emagram
An emagram is one of four thermodynamic diagrams used to display temperature lapse rate and moisture content profiles in the atmosphere. The emagram has axes of temperature and pressure...
). Pseudo-adiabatic process was coined by von Bezold
Wilhelm von Bezold
Johann Friedrich Wilhelm von Bezold was a German physicist and meteorologist born in Munich, Kingdom of Bavaria....
describing air as it is lifted, expands, cools, and eventually precipitates its water vapor; in 1888 he published voluminous work entitled "On the thermodynamics of the atmosphere". 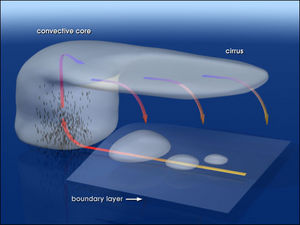 The thermodynamic structure of the hurricane can be modelled as a heat engine running between sea temperature of about 300K and tropopause which has temperature of about 200K. Parcels of air traveling close to the surface take up moisture and warm, ascending air expands and cools releasing moisture (rain) during the condensation. The release of latent heat energy during the condensation provides mechanical energy for the hurricane. Both a decreasing temperature in the upper troposphere or an increasing temperature of the atmosphere close to the surface will increase the maximum winds observed in hurricanes. When applied to hurricane dynamics it defines a Carnot heat engine cycle and predicts maximum hurricane intensity.

The Clausius-Clapeyron relation
Clausius-Clapeyron relation
The Clausius–Clapeyron relation, named after Rudolf Clausius and Benoît Paul Émile Clapeyron, who defined it sometime after 1834, is a way of characterizing a discontinuous phase transition between two phases of matter. On a pressure–temperature diagram, the line separating the two phases is known...
shows how the water-holding capacity of the atmosphere increases by about 8% per Celsius increase in temperature
Temperature
Temperature is a physical property of matter that quantitatively expresses the common notions of hot and cold. Objects of low temperature are cold, while various degrees of higher temperatures are referred to as warm or hot...
. (It does not directly depend on other parameters like the pressure
Pressure
Pressure is the force per unit area applied in a direction perpendicular to the surface of an object. Gauge pressure is the pressure relative to the local atmospheric or ambient pressure.- Definition :...
or density
Density
The mass density or density of a material is defined as its mass per unit volume. The symbol most often used for density is ρ . In some cases , density is also defined as its weight per unit volume; although, this quantity is more properly called specific weight...
.) This water-holding capacity, or "equilibrium vapor pressure," can be approximated using the August-Roche-Magnus formula

is temperature in degrees Celsius). This shows that when atmospheric temperature increases (e.g., due to greenhouse gases) the absolute humidity should also increase exponentially
Exponential function
In mathematics, the exponential function is the function ex, where e is the number such that the function ex is its own derivative. The exponential function is used to model a relationship in which a constant change in the independent variable gives the same proportional change In mathematics,...
(assuming a constant relative humidity
Relative humidity
Relative humidity is a term used to describe the amount of water vapor in a mixture of air and water vapor. It is defined as the partial pressure of water vapor in the air-water mixture, given as a percentage of the saturated vapor pressure under those conditions...
). However, this purely thermodynamic argument is subject of considerable debate because convective processes
Convection
Convection is the movement of molecules within fluids and rheids. It cannot take place in solids, since neither bulk current flows nor significant diffusion can take place in solids....
might cause extensive drying due to increased areas of subsidence
Subsidence (atmosphere)
Subsidence in the Earth's atmosphere is most commonly caused by low temperatures: as air cools, it becomes denser and moves towards the ground, just as warm air becomes less dense and moves upwards...
, efficiency of precipitation could be influenced by the intensity of convection, and because cloud formation is related to relative humidity.