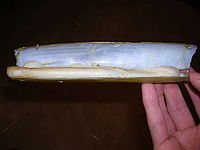 The Atlantic jackknife , Ensis directus, also known as the bamboo clam, American jackknife clam or razor clam (but note that "razor clam
Razor clam
Razor clam may refer to clams in the genus Ensis or Siliqua, including:*Ensis directus, Atlantic jackknife clam*Ensis arcuatus, razor shell*Siliqua patula, Pacific razor clam...
" sometimes refers to different species), is a large species of edible marine
Marine (ocean)
Marine is an umbrella term. As an adjective it is usually applicable to things relating to the sea or ocean, such as marine biology, marine ecology and marine geology...
bivalve mollusc, found on the North American Atlantic
Atlantic Ocean
The Atlantic Ocean is the second-largest of the world's oceanic divisions. With a total area of about , it covers approximately 20% of the Earth's surface and about 26% of its water surface area...
coast, from Canada
Canada
Canada is a North American country consisting of ten provinces and three territories. Located in the northern part of the continent, it extends from the Atlantic Ocean in the east to the Pacific Ocean in the west, and northward into the Arctic Ocean...
to South Carolina
South Carolina
South Carolina is a state in the Deep South of the United States that borders Georgia to the south, North Carolina to the north, and the Atlantic Ocean to the east. Originally part of the Province of Carolina, the Province of South Carolina was one of the 13 colonies that declared independence...
as well as in Europe
Europe
Europe is, by convention, one of the world's seven continents. Comprising the westernmost peninsula of Eurasia, Europe is generally 'divided' from Asia to its east by the watershed divides of the Ural and Caucasus Mountains, the Ural River, the Caspian and Black Seas, and the waterways connecting...
.

This clam
Clam
The word "clam" can be applied to freshwater mussels, and other freshwater bivalves, as well as marine bivalves.In the United States, "clam" can be used in several different ways: one, as a general term covering all bivalve molluscs...
lives in sand and mud and is found in intertidal
Intertidal zone
The intertidal zone is the area that is above water at low tide and under water at high tide . This area can include many different types of habitats, with many types of animals like starfish, sea urchins, and some species of coral...
or subtidal zones in bays and estuaries. Because of its streamlined shell and strong foot, it can burrow in wet sand very quickly, and is also able to swim. It gets its name from the rim of the shell being extremely sharp (stepping on one causes extreme pain and a trip to the doctor) and the shape of the clam overall baring a strong resemblance to an old fashioned straight razor.

At low tide the position of the Atlantic jackknife clam is revealed by a keyhole-shaped opening in the sand; when the clam is disturbed, a small jet of water squirts from this opening as the clam starts to dig. This species' remarkable speed in digging can easily outstrip a human digger, making the clam difficult to catch. Thus the species is not often commercially fished, even though it is widely regarded as a delicacy. The easiest way to catch jackknives is to pour salt on the characteristic breathing holes. The clam will try to escape the salt by coming up out of its hole, at which point you can gently grab the shell and pull it out of the ground.

Predators of Ensis directus other than humans include birds, such as the ring-billed gull
Ring-billed Gull
The Ring-billed Gull is a medium-sized gull.Adults are length and with a wingspan. The head, neck and underparts are white; the relatively short bill is yellow with a dark ring; the back and wings are silver gray; and the legs are yellow. The eyes are yellow with red rims...
(Larus delawarensis) in North America and the Eurasian oystercatcher
Eurasian Oystercatcher
The Eurasian Oystercatcher Haematopus ostralegus, also known as the Common Pied Oystercatcher, or just Oystercatcher, is a wader in the oystercatcher bird family Haematopodidae. It is the most widespread of the oystercatchers, with three races breeding in western Europe, central Eurasia,...
(Haematopus ostralegus) in Europe, and the nemertean worm Cerebratulus lacteushttp://links.jstor.org/sici?sici=0009-3262(197612)17%3A4%3C299%3APOTRCE%3E2.0.CO%3B2-5.

The Atlantic jackknife clam is now also found in northwestern Europe, where it is regarded as a harmful exotic species. It was first recorded in Europe in 1978/79, in the Elbe
Elbe
The Elbe is one of the major rivers of Central Europe. It rises in the Krkonoše Mountains of the northwestern Czech Republic before traversing much of Bohemia , then Germany and flowing into the North Sea at Cuxhaven, 110 km northwest of Hamburg...
estuary.