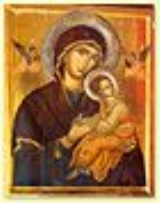 Encyclopedia
The Assyrian Pentecostal Church , in (Persian
Persian language
Persian is an Iranian language within the Indo-Iranian branch of the Indo-European languages. It is primarily spoken in Iran, Afghanistan, Tajikistan and countries which historically came under Persian influence...
: کلیسای پنطیکاستی آشوری), began in villages across the Urmia
Urmia
- Demographics :According to official census of 2006, the population of Urmia is about 871,204.- Language :The population of Urmia is mainly Azerbaijani people, with Kurdish, Assyrian Christian, and Armenian minorities...
region in Iran
Iran
Iran , officially the Islamic Republic of Iran , is a country in Southern and Western Asia. The name "Iran" has been in use natively since the Sassanian era and came into use internationally in 1935, before which the country was known to the Western world as Persia...
, and spread to the Assyrians
Assyrian people
The Assyrian people are a distinct ethnic group whose origins lie in ancient Mesopotamia...
living in the adjacent cities. The current church's doctrine and tradition is a continuation of the spiritual revival movements that took place in Western Iran during the 1930s. In 1940, with great diligence and personal sacrifice a young pastor, named Tooma (Thomas) Nasseri began his evangelical ministry throughout Western Iran and built churches and established congregations in villages, towns, and major metropolitan cities in Iran. With the seed of Protestant Christianity planted Assyrian Protestant Church's began to emerge throughout greater Iran in the 1950s. Currently, the Assyrian Pentecostal Church has several congregations in California, Illinois, Canada, Australia, Austria, and Iran. The Church is an affiliate with the Assemblies of God
Assemblies of God
The Assemblies of God , officially the World Assemblies of God Fellowship, is a group of over 140 autonomous but loosely-associated national groupings of churches which together form the world's largest Pentecostal denomination...
. Today, the church may have from 12 to 20 thousand adherents.


Name of the church

Through Adam's transgression and fall, sin came into the world.
(Romans 5:12-21)

Through Jesus' death and resurrection, righteousness comes to all who believe.
(John 3:3-5)

His coming is imminent. The dead in Christ shall rise first: Then we that are alive and remain shall be caught up together with them in the clouds to meet the Lord in the air.
(I Thess 4: 16-17, Acts 1:11)


The Iranian Government has closed the Church in Tehran (Pr. Victor Tamraz) and the Assembly of God in Urumieh bringing them to a very difficult situation even to subsist.
By closing the churches the Islamic regime of Iran is forcing the people to abandon the Christian Faith and encouraging the pastors to emigrate abroad. The secret police call first the pastors for an interview when they are "politely" told to leave the region and better emigrate abroad. When they don't do so, the next step follows... Imprisonment, Church closure and oppression.
The aim seems to be the eradication of all Christian Churches in Iran through persecution, imprisonment and torture of Christian leaders like happened to PR. Wilson Issavi (Kermanshah) released from prison in April 2010 after 55 days. The Assyrian Pentecostal Church of Kermanshah has been also closed, Pr. Wilson forbidden of any activity and the Church may not be re-opened.
Pr. Wilson was also forced to leave the region and his house and still suffers on emotional and physical disturbances caused by the mistreatment in prison (having been seen recently in June 2010).

The adherents of the Assyrian Pentecostal Church observe the following holidays: