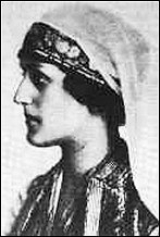 Encyclopedia
Aspasia Manos (4 September 1896 – 7 August 1972), was a Greek
Greeks
The Greeks, also known as the Hellenes , are a nation and ethnic group native to Greece, Cyprus and neighboring regions. They also form a significant diaspora, with Greek communities established around the world....
commoner who became the wife of Alexander I, King of the Hellenes. Due to the controversy over her marriage, she was styled Princess of Greece and Denmark rather than Queen Aspasia of Greece.


Princess of Greece and Denmark

On 4 November 1919, at Tatoi
Tatoi
Tatoi, located 5 km north of Athens's suburbs, and 27 km from the Athenian Acropolis was the summer palace and 10,000 acre estate of the former Greek Royal Family, and the site of George II of the Hellenes's birth...
, Aspasia Manos married King Alexander in a secret, civil wedding. Their marriage caused a scandal, and the couple was forced to temporarily flee to Paris. She never took the title of Queen, being known as Madame Manos by those aware of the marriage. Alexander lived less than a year after the wedding. His father, King Constantine I
Constantine I of Greece
Constantine I was King of Greece from 1913 to 1917 and from 1920 to 1922. He was commander-in-chief of the Hellenic Army during the unsuccessful Greco-Turkish War of 1897 and led the Greek forces during the successful Balkan Wars of 1912–1913, in which Greece won Thessaloniki and doubled in...
, was restored to the Greek throne a month after Alexander's death and returned from exile. His government officially treated the brief reign of his late son as a regency
Regent
A regent, from the Latin regens "one who reigns", is a person selected to act as head of state because the ruler is a minor, not present, or debilitated. Currently there are only two ruling Regencies in the world, sovereign Liechtenstein and the Malaysian constitutive state of Terengganu...
, which meant that Alexander's marriage, contracted without his father's permission, was technically illegal, the marriage void, and the couple's posthumous child illegitimate.

Aspasia and Alexander were the parents of only one child, Princess Alexandra, born five months after Alexander's death at Tatoi (her father having died of sepsis
Sepsis
Sepsis is a potentially deadly medical condition that is characterized by a whole-body inflammatory state and the presence of a known or suspected infection. The body may develop this inflammatory response by the immune system to microbes in the blood, urine, lungs, skin, or other tissues...
following a monkey bite). Alexandra would later marry Peter II, King of Yugoslavia
Peter II of Yugoslavia
Peter II, also known as Peter II Karađorđević , was the third and last King of Yugoslavia...
.

Aspasia Manos and her daughter were the only members of the Glücksburg
Schleswig-Holstein-Sonderburg-Glücksburg
The House of Schleswig-Holstein-Sonderburg-Glücksburg , known as the House of Glücksburg for short, is a German ducal house, junior branches of which include the royal houses of Denmark and Norway, the deposed royal house of Greece, and the heir to the thrones of the Commonwealth realms The House...
dynasty, the Greek Royal House, to be of recent Greek
Greeks
The Greeks, also known as the Hellenes , are a nation and ethnic group native to Greece, Cyprus and neighboring regions. They also form a significant diaspora, with Greek communities established around the world....
descent. Like most European royal families by the 20th century, the Glücksburgs were predominantly German
Germans
The Germans are a Germanic ethnic group native to Central Europe. The English term Germans has referred to the German-speaking population of the Holy Roman Empire since the Late Middle Ages....
in descent.

Due to the combination of her daughter and son-in-law's health problems, financially straitened circumstances and troubled marriage, Aspasia acted as guardian
Legal guardian
A legal guardian is a person who has the legal authority to care for the personal and property interests of another person, called a ward. Usually, a person has the status of guardian because the ward is incapable of caring for his or her own interests due to infancy, incapacity, or disability...
to her grandson Alexander, Crown Prince of Yugoslavia
Alexander, Crown Prince of Yugoslavia
Alexander II Karadjordjevic, Crown Prince of Yugoslavia , is the former crown prince of the former Kingdom of Yugoslavia and the head of the House of Karadjordjevic. Alexander is the only child of former King Peter II of Yugoslavia and Princess Alexandra of Greece and Denmark...
(born 1945). She raised him mostly in England
England
England is a country that is part of the United Kingdom. It shares land borders with Scotland to the north and Wales to the west; the Irish Sea is to the north west, the Celtic Sea to the south west, with the North Sea to the east and the English Channel to the south separating it from continental...
. Just a month before her death, Alexander married a Royal Franco-Brazilian, Princess Maria da Gloria of Orléans-Braganza
Princess Maria da Gloria of Orléans-Braganza
Princess Maria da Glória Henriqueta Dolores of Orléans-Braganza, Duchess of Segorbe is a distant member of the Brazilian Imperial Family and the wife of the Duke of Segorbe...
.

She died in Venice
Venice
Venice is a city in northern Italy which is renowned for the beauty of its setting, its architecture and its artworks. It is the capital of the Veneto region...
, and was initially interred at the cemetery of San Michele island near Venice. Her remains were later transferred to the Royal Cemetery Plot in the park of Tatoi
Tatoi
Tatoi, located 5 km north of Athens's suburbs, and 27 km from the Athenian Acropolis was the summer palace and 10,000 acre estate of the former Greek Royal Family, and the site of George II of the Hellenes's birth...
near Dekeleia (23 km north of Athens.)

Aspasia was born in Athens
Athens
Athens , is the capital and largest city of Greece. Athens dominates the Attica region and is one of the world's oldest cities, as its recorded history spans around 3,400 years. Classical Athens was a powerful city-state...
, the daughter of Colonel Petros Manos and his wife, Maria Argyropoulos (1874–1930). Her family descended, in part, from Phanariote Greeks living in Constantinople
Constantinople
Constantinople was the capital of the Roman, Eastern Roman, Byzantine, Latin, and Ottoman Empires. Throughout most of the Middle Ages, Constantinople was Europe's largest and wealthiest city.-Names:...
.

Her ancestry is deeply rooted in the Vlach and Greek ("Romaion") peoples of the Balkans, particularly in the Danubian principalities, as well as in the Peloponnese and Constantinople.

Some of her ancestors had been leaders during the Greek War of Independence
Greek War of Independence
The Greek War of Independence, also known as the Greek Revolution was a successful war of independence waged by the Greek revolutionaries between...
, some had been Hellenic leaders in Constantinople for centuries under the Ottoman Empire
Ottoman Empire
The Ottoman EmpireIt was usually referred to as the "Ottoman Empire", the "Turkish Empire", the "Ottoman Caliphate" or more commonly "Turkey" by its contemporaries...
, and some had even been reigning princes of Danubian provinces
Danubian provinces
Danubian provinces to refer to the Roman provinces of the Lower Danube: Dacia , Moesia and Scythia Minor, as well as Pannonia Inferior....
. She belonged to one of Greece's most aristocratic
Aristocracy
Aristocracy , is a form of government in which a few elite citizens rule. The term derives from the Greek aristokratia, meaning "rule of the best". In origin in Ancient Greece, it was conceived of as rule by the best qualified citizens, and contrasted with monarchy...
families, and was considered a suitable consort
Queen consort
A queen consort is the wife of a reigning king. A queen consort usually shares her husband's rank and holds the feminine equivalent of the king's monarchical titles. Historically, queens consort do not share the king regnant's political and military powers. Most queens in history were queens consort...
for a Greek king by some, but not by those who expected royalty to marry only royalty.