Encyclopedia
An Asian Brazilian is is a Brazilian citizen of full or partial Asian
Asian people
Asian people or Asiatic people is a term with multiple meanings that refers to people who descend from a portion of Asia's population.- Central Asia :...
ancestry, who remains culturally connected to Asia, or an Asian-born person permanently residing in Brazil. Brazil received many immigrants from Asia, both from Middle East
Middle East
The Middle East is a region that encompasses Western Asia and Northern Africa. It is often used as a synonym for Near East, in opposition to Far East...
and East Asia
East Asia
East Asia or Eastern Asia is a subregion of Asia that can be defined in either geographical or cultural terms...
. The first Asian immigrants to arrive in Brazil were a small number of Chinese people
Chinese people
The term Chinese people may refer to any of the following:*People with Han Chinese ethnicity ....
(3,000) during the colonial period as coolie
Coolie
Historically, a coolie was a manual labourer or slave from Asia, particularly China, India, and the Phillipines during the 19th century and early 20th century...
slaves. However, significant immigration from Asia to Brazil started in the late 19th century, when immigration from Lebanon
Lebanon
Lebanon , officially the Republic of LebanonRepublic of Lebanon is the most common term used by Lebanese government agencies. The term Lebanese Republic, a literal translation of the official Arabic and French names that is not used in today's world. Arabic is the most common language spoken among...
and Syria
Syria
Syria , officially the Syrian Arab Republic , is a country in Western Asia, bordering Lebanon and the Mediterranean Sea to the West, Turkey to the north, Iraq to the east, Jordan to the south, and Israel to the southwest....
became important. In Brazil, most of definitions of an Asian Brazilian usually do not refer to the community of West Asian origins such as Arabs
Arab Brazilian
An Arab Brazilian is a Brazilian citizen born in an Arabic country, or a Brazilian-born person of Arab descent, who is aware of such ancestry and remains connected, in some degree, to Arabic culture.- Immigration to Brazil :...
, Turks and Armenians
Armenian Brazilian
An Armenian Brazilian is a Brazilian person of full, partial, or predominantly Armenian ancestry, or an Armenian immigrant in Brazil.-Migration history:...
.

In 1907, the Government of the State of São Paulo authorized Japan
Japan
Japan is an island nation in East Asia. Located in the Pacific Ocean, it lies to the east of the Sea of Japan, China, North Korea, South Korea and Russia, stretching from the Sea of Okhotsk in the north to the East China Sea and Taiwan in the south...
's Imperial Immigration Company to transfer, annually, a certain amount of emigrants to Brazil. On June 18, 1908, arrived at Santos
Santos (São Paulo)
-Sister cities: Shimonoseki, Japan Nagasaki, Japan Funchal, Portugal Trieste, Italy Coimbra, Portugal Ansião, Portugal Arouca, Portugal Ushuaia, Argentina Havana, Cuba Taizhou. China Ningbo. China Constanţa, Romania Ulsan, South Korea Colón, Panama* Cadiz, Spain...
' harbor the Japanese vessel Kasato Maru with the first group of immigrants composed of 165 families, a total of 786 people. From the harbor they went to coffee
Coffee
Coffee is a brewed beverage with a dark,init brooo acidic flavor prepared from the roasted seeds of the coffee plant, colloquially called coffee beans. The beans are found in coffee cherries, which grow on trees cultivated in over 70 countries, primarily in equatorial Latin America, Southeast Asia,...
farms, in the Mogiana region, State of São Paulo, to work as "colonists". There they started a new life in a foreign country with different climate, culture and language. Other quotas followed them and almost all of them went to live in coffee farm
Farm
A farm is an area of land, or, for aquaculture, lake, river or sea, including various structures, devoted primarily to the practice of producing and managing food , fibres and, increasingly, fuel. It is the basic production facility in food production. Farms may be owned and operated by a single...
s. 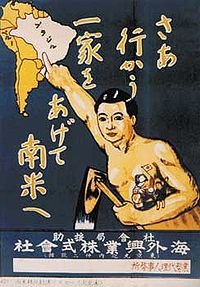 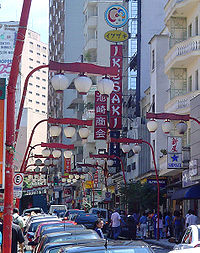 Between 1910 and 1914 approximately 14,200 immigrants arrived from Japan, who, after ending their labor contract in the coffee farms, went to the interior of the State, to the coast near the Santos Juquiá railway or to the suburbs of São Paulo, in order to get their independence. During the 1910s they established several immigration centers in the region of the North West railway as well as alongside the banks of Ribeira River in Iguape. From 1925 to 1935 these centers spread statewide and became localities. By this time was recorded the arrival in Brazil of approximately 140,000 immigrants including those who went directly to the North of the Country.

The immigration influx was interrupted for 10 year because of World War II
World War II
World War II, or the Second World War , was a global conflict lasting from 1939 to 1945, involving most of the world's nations—including all of the great powers—eventually forming two opposing military alliances: the Allies and the Axis...
. In 1959 it started again but the quotas were smaller, especially those that arrived from 1961 on, date of the beginning of Japan's economical recuperation. Up to the present arrived in Brazil approximately 260,000 immigrants.

The biggest concentration of immigrants are:
Japanese immigration

The others are living countrywide.

Their labor force is employed as follows: Agriculture
Agriculture
Agriculture is the cultivation of animals, plants, fungi and other life forms for food, fiber, and other products used to sustain life. Agriculture was the key implement in the rise of sedentary human civilization, whereby farming of domesticated species created food surpluses that nurtured the...
(50%); Commerce (35%), Industry (15%). The industry has grown quickly in view of the establishment in Brazil of Japanese enterprises during the 60's. We believe that 800,000 people compose the Japanese community in Brazil, which is already in its 4th generation. The descendants of the immigrants perform all kind of activity within the cultural and economic sectors. In the past two decades we have had two State Ministers in the Brazilian Government.

Following their 80-year-old path immigrants and their descendants who have already close ties with Brazil
Brazil
Brazil , officially the Federative Republic of Brazil , is the largest country in South America. It is the world's fifth largest country, both by geographical area and by population with over 192 million people...
take part and contribute with love and dedication to the construction of a better and developed country. This year, on June 18, they will celebrate with great rejoicing the beginning of the Japanese
Japanese people
The are an ethnic group originating in the Japanese archipelago and are the predominant ethnic group of Japan. Worldwide, approximately 130 million people are of Japanese descent; of these, approximately 127 million are residents of Japan. People of Japanese ancestry who live in other countries...
immigration into Brazil, since this day symbolizes a landmark of a history started 80 years ago. 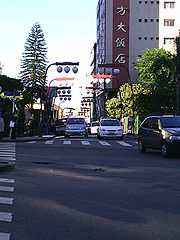 The migration continued through the 1970s, despite the interruption of World War II
World War II
World War II, or the Second World War , was a global conflict lasting from 1939 to 1945, involving most of the world's nations—including all of the great powers—eventually forming two opposing military alliances: the Allies and the Axis...
, with a total of 250,000 people crossing the seas. Not only farmers, but also politicians, engineers and entrepreneurs among Japanese-Brazilians appeared one after another. A reversal of that flow, and a swift increase of migrant workers in Japan
Japan
Japan is an island nation in East Asia. Located in the Pacific Ocean, it lies to the east of the Sea of Japan, China, North Korea, South Korea and Russia, stretching from the Sea of Okhotsk in the north to the East China Sea and Taiwan in the south...
, was triggered by the 1990 revisions to the immigration control law. At the request of the business community, second- and third-generation Japanese from Brazil were granted residence status without employment restrictions.

Director Yamasaki visited Japan in the late 1990s to film a sequel to her first work. Her goal was to explore why recent immigrants, despite being accepted into Japan under a so-called national policy, were treated as gaijin (aliens). She focused on the lifestyles of the Japanese-Brazilians, tracking the plights of their fourth-generation children, many of whom dropped out of school after being unable to adapt to Japan's educational system.

These Japanese-Brazilians are now 310,000 strong, exceeding the number of Japanese who originally moved to Brazil. While more of them have permanent residency, how to educate their children has become a particularly acute problem. There is no shortage of cases in which such children stop attending school due to the language barrier and descend into delinquency. Even when they stay in school, many can form no tangible ambitions for the future. While it is natural to expect parents to take responsibility for their children's education, the success of such efforts depends upon adequate support in the classroom.