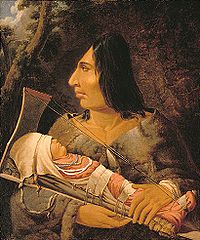 Artificial cranial deformation, head flattening, or head binding is a form of permanent body alteration in which the skull
Human skull
The human skull is a bony structure, skeleton, that is in the human head and which supports the structures of the face and forms a cavity for the brain.In humans, the adult skull is normally made up of 22 bones...
of a human being is intentionally deformed. It is done by distorting the normal growth of a child's skull by applying force. Flat shapes, elongated ones (produced by binding between two pieces of wood
Wood
Wood is a hard, fibrous tissue found in many trees. It has been used for hundreds of thousands of years for both fuel and as a construction material. It is an organic material, a natural composite of cellulose fibers embedded in a matrix of lignin which resists compression...
), rounded ones (binding in cloth) and conical
Cone
A cone is a basic geometrical shape; see cone .Cone may also refer to:-Mathematics:*Cone , a family of morphisms resembling a geometric cone...
ones are among those chosen. It is typically carried out on an infant
Infant
A newborn or baby is the very young offspring of a human or other mammal. A newborn is an infant who is within hours, days, or up to a few weeks from birth. In medical contexts, newborn or neonate refers to an infant in the first 28 days after birth...
, as the skull is most pliable at this time. In a typical case, headbinding begins approximately a month after birth and continues for about six months.

Intentional head moulding producing extreme cranial deformations was once commonly practised in a number of cultures widely separated geographically and chronologically, and so was probably independently invented more than once. It still occurs today in a few places, like Vanuatu
Vanuatu
Vanuatu , officially the Republic of Vanuatu , is an island nation located in the South Pacific Ocean. The archipelago, which is of volcanic origin, is some east of northern Australia, northeast of New Caledonia, west of Fiji, and southeast of the Solomon Islands, near New Guinea.Vanuatu was...
.

Early examples of intentional human cranial deformation predate written history and date back to 45,000 BC in Neanderthal
Neanderthal
The Neanderthal is an extinct member of the Homo genus known from Pleistocene specimens found in Europe and parts of western and central Asia...
skulls, and to the Proto-Neolithic
Neolithic
The Neolithic Age, Era, or Period, or New Stone Age, was a period in the development of human technology, beginning about 9500 BC in some parts of the Middle East, and later in other parts of the world. It is traditionally considered as the last part of the Stone Age...
Homo sapiens component (12th millennium BCE) from Shanidar Cave in Iraq
Iraq
Iraq ; officially the Republic of Iraq is a country in Western Asia spanning most of the northwestern end of the Zagros mountain range, the eastern part of the Syrian Desert and the northern part of the Arabian Desert....
. It occurred among Neolithic peoples in SW Asia.


The earliest written record of cranial deformation dates to 400 BC in Hippocrates
Hippocrates
Hippocrates of Cos or Hippokrates of Kos was an ancient Greek physician of the Age of Pericles , and is considered one of the most outstanding figures in the history of medicine...
' description of the Macrocephali
Macrocephali
The Macrocephali in Medieval bestiaries were a race of humanoids with large heads....
or Long-heads, who were named for their practice of cranial modification.

The practice was also known among the Australian Aborigines
Australian Aborigines
Australian Aborigines , also called Aboriginal Australians, from the latin ab originem , are people who are indigenous to most of the Australian continentthat is, to mainland Australia and the island of Tasmania...
, Maya
Maya civilization
The Maya is a Mesoamerican civilization, noted for the only known fully developed written language of the pre-Columbian Americas, as well as for its art, architecture, and mathematical and astronomical systems. Initially established during the Pre-Classic period The Maya is a Mesoamerican...
, and certain tribes of North America
North America
North America is a continent wholly within the Northern Hemisphere and almost wholly within the Western Hemisphere. It is also considered a northern subcontinent of the Americas...
n natives
Native Americans in the United States
Native Americans in the United States are the indigenous peoples in North America within the boundaries of the present-day continental United States, parts of Alaska, and the island state of Hawaii. They are composed of numerous, distinct tribes, states, and ethnic groups, many of which survive as...
, most notably the Chinookan
Chinookan
Chinook refers to several native amercain groups of in the Pacific Northwest region of the United States, speaking the Chinookan languages. In the early 19th century, the Chinookan-speaking peoples lived along the lower and middle Columbia River in present-day Oregon and Washington...
tribes of the Northwest and the Choctaw
Choctaw
The Choctaw are a Native American people originally from the Southeastern United States...
of the Southeast.

In the Old World
Old World
The Old World consists of those parts of the world known to classical antiquity and the European Middle Ages. It is used in the context of, and contrast with, the "New World" ....
, Huns
Huns
The Huns were a group of nomadic people who, appearing from east of the Volga River, migrated into Europe c. AD 370 and established the vast Hunnic Empire there. Since de Guignes linked them with the Xiongnu, who had been northern neighbours of China 300 years prior to the emergence of the Huns,...
and Alans
Alans
The Alans, or the Alani, occasionally termed Alauni or Halani, were a group of Sarmatian tribes, nomadic pastoralists of the 1st millennium AD who spoke an Eastern Iranian language which derived from Scytho-Sarmatian and which in turn evolved into modern Ossetian.-Name:The various forms of Alan —...
are also known to have practised similar cranial deformation. In Late Antiquity
Late Antiquity
Late Antiquity is a periodization used by historians to describe the time of transition from Classical Antiquity to the Middle Ages, in both mainland Europe and the Mediterranean world. Precise boundaries for the period are a matter of debate, but noted historian of the period Peter Brown proposed...
(AD 300-600), the East Germanic tribes
East Germanic tribes
The Germanic tribes referred to as East Germanic constitute a wave of migrants who may have moved from Scandinavia into the area between the Oder and Vistula rivers between the years 600 and 300 BC. Later they went to the south...
who were ruled by the Huns, adopted this custom (Gepids, Ostrogoths, Heruli
Heruli
The Heruli were an East Germanic tribe who are famous for their naval exploits. Migrating from Northern Europe to the Black Sea in the third century They were part of the...
, Rugii and Burgundians
Burgundians
The Burgundians were an East Germanic tribe which may have emigrated from mainland Scandinavia to the island of Bornholm, whose old form in Old Norse still was Burgundarholmr , and from there to mainland Europe...
). In western Germanic tribes, artificial skull deformations have rarely been found.

The Native American group known as the Flathead did not in fact practise head flattening, but were named as such in contrast to other Salishan people who used skull modification to make the head appear rounder. However, other tribes, including the Choctaw
Choctaw
The Choctaw are a Native American people originally from the Southeastern United States...
, Chehalis
Chehalis (tribe)
The Chehalis people are a native people of westernWashington state in the United States. They should not be confused with the similarly named Chehalis First Nation of the Harrison River in the Fraser Valley area of British Columbia....
, and Nooksack Indians
Nooksack (tribe)
The Nooksack are a Native American people in northwestern Washington state in the United States. The tribe lives in the mainland northwest corner of the state near the small town of Deming, Washington , and has over 1,800 enrolled members.In 1971, the tribe was ceded a one acre reservation after...
, did practise head flattening by strapping the infant's head to a cradleboard
Cradleboard
Cradleboards are traditional protective baby-carriers used by many indigenous cultures in North America. There are a variety of styles of cradleboard, reflecting the diverse artisan practises of indigenous cultures...
.

Friedrich Ratzel
Friedrich Ratzel
Friedrich Ratzel was a German geographer and ethnographer, notable for first using the term Lebensraum in the sense that the National Socialists later would.-Life:...
in The History of Mankind reported in 1896 that deformation of the skull, both by flattening it behind and elongating it towards the vertex, was found in isolated instances in Tahiti
Tahiti
Tahiti is the largest island in the Windward group of French Polynesia, located in the archipelago of the Society Islands in the southern Pacific Ocean. It is the economic, cultural and political centre of French Polynesia. The island was formed from volcanic activity and is high and mountainous...
, Samoa
Samoa
Samoa , officially the Independent State of Samoa, formerly known as Western Samoa is a country encompassing the western part of the Samoan Islands in the South Pacific Ocean. It became independent from New Zealand in 1962. The two main islands of Samoa are Upolu and one of the biggest islands in...
, Hawaii
Hawaii
Hawaii is the newest of the 50 U.S. states , and is the only U.S. state made up entirely of islands. It is the northernmost island group in Polynesia, occupying most of an archipelago in the central Pacific Ocean, southwest of the continental United States, southeast of Japan, and northeast of...
, and the Paumotu group and occurring most frequently on Mallicollo in the New Hebrides
New Hebrides
New Hebrides was the colonial name for an island group in the South Pacific that now forms the nation of Vanuatu. The New Hebrides were colonized by both the British and French in the 18th century shortly after Captain James Cook visited the islands...
, where the skull was squeezed extraordinarily flat.

Deformation usually begins just after birth for the next couple of years until the desired shape has been reached or the child rejects the apparatus (Dingwall, 1931; Trinkaus, 1982; Anton and Weinstein, 1999).

In Europe and Asia, three main types of artificial cranial deformation have been defined by E.V. Zhirov (1941, p. 82):

Cranial deformation was probably performed to signify group affiliation, or to demonstrate social status. This may have played a key role in Egypt
Egypt
Egypt , officially the Arab Republic of Egypt, Arabic: , is a country mainly in North Africa, with the Sinai Peninsula forming a land bridge in Southwest Asia. Egypt is thus a transcontinental country, and a major power in Africa, the Mediterranean Basin, the Middle East and the Muslim world...
ian and Mayan
Maya civilization
The Maya is a Mesoamerican civilization, noted for the only known fully developed written language of the pre-Columbian Americas, as well as for its art, architecture, and mathematical and astronomical systems. Initially established during the Pre-Classic period The Maya is a Mesoamerican...
societies. Queen Nefertiti
Nefertiti
Nefertiti was the Great Royal Wife of the Egyptian Pharaoh Akhenaten. Nefertiti and her husband were known for a religious revolution, in which they started to worship one god only...
is often depicted with what may be an elongated skull, as is King Tutankhamen. It could be aimed at creating a skull shape which is aesthetically more pleasing or associated with desirable attributes. For example, in the Nahai-speaking area of Tomman Island
Tomman Island
Tomman Island is a small island in Vanuatu, just off the southwest coast of Malakula....
and the south south-western Malakula
Malakula
Malakula Island , also spelled Malekula, is the second-largest island in the nation of Vanuatu, in the Pacific Ocean region of Melanesia...
n, a person with an elongated head is thought to be more intelligent, of higher status
Social status
In sociology or anthropology, social status is the honor or prestige attached to one's position in society . It may also refer to a rank or position that one holds in a group, for example son or daughter, playmate, pupil, etc....
, and closer to the world of the spirits.