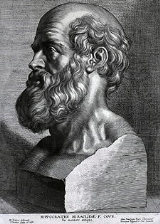 Overview
Hippocrates of Cos or Hippokrates of Kos (Greek
Ancient Greek
Ancient Greek is the stage of the Greek language in the periods spanning the times c. 9th–6th centuries BC, , c. 5th–4th centuries BC , and the c. 3rd century BC – 6th century AD of ancient Greece and the ancient world; being predated in the 2nd millennium BC by Mycenaean Greek...
: ; Hippokrátēs; ca. 460 BC – ca. 370 BC) was an ancient Greek
Ancient Greece
Ancient Greece is a civilization belonging to a period of Greek history that lasted from the Archaic period of the 8th to 6th centuries BC to the end of antiquity. Immediately following this period was the beginning of the Early Middle Ages and the Byzantine era. Included in Ancient Greece is the...
physician
Physician
A physician is a health care provider who practices the profession of medicine, which is concerned with promoting, maintaining or restoring human health through the study, diagnosis, and treatment of disease, injury and other physical and mental impairments...
of the Age of Pericles
Age of Pericles
Fifth-century Athens refers to the Greek city-state of Athens in the period of roughly 480 BC-404 BC. This was a period of Athenian political hegemony, economic growth and cultural flourishing formerly known as the Golden Age of Athens or The Age of Pericles. The period began in 480 BC when an...
(Classical Athens), and is considered one of the most outstanding figures in the history of medicine
History of medicine
All human societies have medical beliefs that provide explanations for birth, death, and disease. Throughout history, illness has been attributed to witchcraft, demons, astral influence, or the will of the gods...
. He is referred to as the father of Western medicine in recognition of his lasting contributions to the field as the founder of the Hippocratic School of medicine. This intellectual school revolutionized medicine in ancient Greece
Medicine in Ancient Greece
The first known Greek medical school opened in Cnidus in 700 BC. Alcmaeon, author of the first anatomical work, worked at this school, and it was here that the practice of observing patients was established. Ancient Greek medicine revolved around the theory of humours...
, establishing it as a discipline distinct from other fields that it had traditionally been associated with (notably theurgy
Theurgy
Theurgy describes the practice of rituals, sometimes seen as magical in nature, performed with the intention of invoking the action or evoking the presence of one or more gods, especially with the goal of uniting with the divine, achieving henosis, and perfecting oneself.- Definitions :*Proclus...
and philosophy
Philosophy
Philosophy is the study of general and fundamental problems, such as those connected with existence, knowledge, values, reason, mind, and language. Philosophy is distinguished from other ways of addressing such problems by its critical, generally systematic approach and its reliance on rational...
), thus establishing medicine as a profession.

Did Hippocrates and Plato attend school together

So at what time was hippocrates famous for his medicine...?
More

What was Hippocrates beliefs?
More

Conclusions which are merely verbal cannot bear fruit, only those do which are based on demonstrated fact. For affirmation and talk are deceptive and treacherous. Wherefore one must hold fast to facts in generalizations also, and occupy oneself with facts persistently, if one is to acquire that ready and infallible habit which we call "the art of medicine."

Everything in excess is opposed to nature.

As quoted in Catholic Morality : Selected Sayings and Some Account of Various Religions (1915) by E Comyns Durnford, p. 90

To do nothing is sometimes a good remedy.

As quoted in A New Dictionary of Quotations on Historical Principles from Ancient and Modern Sources (1942) by H. L. Mencken :s: Aphorisms|Full text online at Wikisource

Sleep and watchfulness, both of them, when immoderate, constitute disease.