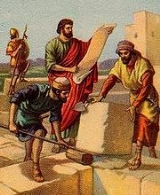 Encyclopedia
Nehemiah is the central figure of the Book of Nehemiah
Book of Nehemiah
The Book of Nehemiah is a book of the Hebrew Bible. Told largely in the form of a first-person memoir, it concerns the rebuilding of the walls of Jerusalem by Nehemiah, a Jew who is a high official at the Persian court, and the dedication of the city and its people to God's laws...
, which describes his work rebuilding Jerusalem and purifying the Jewish community. He was the son of Hachaliah
Hachaliah
Hachaliah was the father of Nehemiah, the author of the Book of Nehemiah, which is a book of the Hebrew Bible, known to Jews as the Tanakh and to Christians as the Old Testament. Hachaliah's name is mentioned at the beginning of the book. Hachaliah distinguishes Nehemiah from others with the same...
, (Neh. 1:1) and probably of the Tribe of Judah
Tribe of Judah
According to the Hebrew Bible, the Tribe of Judah was one of the Tribes of Israel.Following the completion of the conquest of Canaan by the Israelite tribes after about 1200 BCE, Joshua allocated the land among the twelve tribes....
, and his career took place probably in the second half of the 5th century BC. 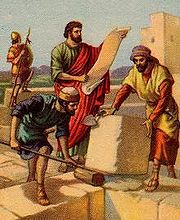 In the 20th year of Artaxerxes, king of Persia, (445/444 BC), Nehemiah was cup-bearer to the king
Cup-bearer
A cup-bearer was an officer of high rank in royal courts, whose duty it was to serve the drinks at the royal table. On account of the constant fear of plots and intrigues, a person must be regarded as thoroughly trustworthy to hold this position. He must guard against poison in the king's cup, and...
. Learning that the walls of Jerusalem were broken down he asked the king for permission to return and rebuild them, and Artaxerxes sent him to Judah as governor of the province with a mission to rebuild the walls. Once there he defied the opposition of Judah's enemies on all sides - Samaritans, Ammonites, Arabs and Philistines - and rebuilt the walls within 52 days, from the Sheep Gate in the North, the Hananel Tower at the North West corner, the Fish Gate in the West, the Furnaces Tower at the Temple Mount's South West corner, the Dung Gate in the South, the East Gate and the gate beneath the Golden Gate in the East.

He then took measures to repopulate the city and purify the Jewish community, enforcing the cancellation of debt, assisting Ezra
Ezra
Ezra , also called Ezra the Scribe and Ezra the Priest in the Book of Ezra. According to the Hebrew Bible he returned from the Babylonian exile and reintroduced the Torah in Jerusalem...
to promulgate the law of Moses, and enforcing the divorce of Jewish men from their non-Jewish wives.

After 12 years as governor, during which he ruled with justice and righteousness, he returned to the king in Susa. After some time in Susa he returned to Jerusalem, only to find that the people had fallen back into their evil ways. Non-Jews were permitted to conduct business inside Jerusalem on the Sabbath and to keep rooms in the Temple. Greatly angered, he purified the Temple and the priests and Levites and enforced the observance of the law of Moses.

Although there is some disagreement that a genuine memoir underlies the Book of Nehemiah
Book of Nehemiah
The Book of Nehemiah is a book of the Hebrew Bible. Told largely in the form of a first-person memoir, it concerns the rebuilding of the walls of Jerusalem by Nehemiah, a Jew who is a high official at the Persian court, and the dedication of the city and its people to God's laws...
, the historical context of Nehemiah's mission was the Persians' need for increased security in the Levant
Levant
The Levant or ) is the geographic region and culture zone of the "eastern Mediterranean littoral between Anatolia and Egypt" . The Levant includes most of modern Lebanon, Syria, Jordan, Israel, the Palestinian territories, and sometimes parts of Turkey and Iraq, and corresponds roughly to the...
and enhancement of Imperial control in the light of the serious revolt which broke out in Egypt in the middle of the 5th century BC. The basic memoir can be no earlier than about 400 BC. The editorial process extended the original report of Nehemiah's wall-building activities first with an account of the restoration and reform of the community of Israel. In the final phase Ezra was combined with Nehemiah, and the role of Ezra was minimized in favor of that of Nehemiah.

Nehemiah is identified in one haggadah with Zerubbabel
Zerubbabel
Zerubbabel was a governor of the Persian Province of Judah and the grandson of Jehoiachin, penultimate king of Judah. Zerubbabel led the first group of Jews, numbering 42,360, who returned from the Babylonian Captivity in the first year of Cyrus, King of Persia . The date is generally thought to...
, the latter name being considered an epithet of Nehemiah and as indicating that he was born at Babylon ("Zera'+ Babel"; Sanh. 38a). With Ezra, he marks the spring-time in the national history of Judaism (Cant. R. ii. 12). A certain mishnah is declared by the Rabbis to have originated in the school of Nehemiah (Shab. 123b). Still, Nehemiah is blamed by the Rabbis for his seemingly boastful expression, "Think upon me, my God, for good" (Neh. v. 19, xiii. 31), and for his disparagement of his predecessors (ib. v. 15), among whom was Daniel. The Rabbis think that these two faults were the reason that this book is not mentioned under its own name, but forms part of the Book of Ezra (Sanh. 93b). According to B. B. 15a Nehemiah completed the Book of Chronicles, which was written by Ezra.

In non-Hebrew literature, such as the Septuagint and the Vulgate, Nehemiah was regarded as a eunuch
Eunuch
A eunuch is a person born male most commonly castrated, typically early enough in his life for this change to have major hormonal consequences...
. The Septuagint, the Greek translation of the Hebrew Bible
Hebrew Bible
The Hebrew Bible is a term used by biblical scholars outside of Judaism to refer to the Tanakh , a canonical collection of Jewish texts, and the common textual antecedent of the several canonical editions of the Christian Old Testament...
, describes him as a eunochos (eunuch), rather than an oinochoos. However, other Biblical scholars have argued that the existing manuscripts of the Septuagint mistranslated the Hebrew word for "cupbearer". According to the Torah, no one whose testicles are crushed or whose penis is cut off shall be admitted to the assembly of the Lord. Thus, those individuals who speculate that Nehemiah was a eunuch, have attempted to bolster their claims by noting that Nehemiah could not enter certain areas of the temple. His enemy Shemaiah attempted to trick him into doing so. Another explanation is that Nehemiah was not a priest and was not authorized to go into those portions of the Temple reserved for the priests. Nehemiah prayed repeatedly: Remember for my good, O my God, all that I have done for this people.