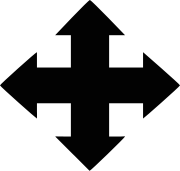 A cross whose arms end in arrowheads is called a "cross barby" or "cross barbee" in the traditional terminology of heraldry
Heraldry
Heraldry is the profession, study, or art of creating, granting, and blazoning arms and ruling on questions of rank or protocol, as exercised by an officer of arms. Heraldry comes from Anglo-Norman herald, from the Germanic compound harja-waldaz, "army commander"...
. In Christian
Christian
A Christian is a person who adheres to Christianity, an Abrahamic, monotheistic religion based on the life and teachings of Jesus of Nazareth as recorded in the Canonical gospels and the letters of the New Testament...
use, the ends of this cross resemble the barbs of fish hooks, or fish spears. This alludes to the Ichthys
Ichthys
Ichthys, from Koine Greek: , is the Greek word for "fish"....
symbol of Christ
Christ
Christ is the English term for the Greek meaning "the anointed one". It is a translation of the Hebrew , usually transliterated into English as Messiah or Mashiach...
, and is suggestive of the "fishers of men" theme in the Gospel
Gospel
A gospel is an account, often written, that describes the life of Jesus of Nazareth. In a more general sense the term "gospel" may refer to the good news message of the New Testament. It is primarily used in reference to the four canonical gospels of Matthew, Mark, Luke, and John...
.

In modern use, the symbol has become associated with extremist right wing organisations after the Arrow Cross (Nyilaskereszt) symbol was used in Hungary
Hungary
Hungary , officially the Republic of Hungary , is a landlocked country in Central Europe. It is situated in the Carpathian Basin and is bordered by Slovakia to the north, Ukraine and Romania to the east, Serbia and Croatia to the south, Slovenia to the southwest and Austria to the west. The...
in the 1930s and 1940s as the symbol of a Hungarian National Socialist political party, the Arrow Cross Party
Arrow Cross Party
The Arrow Cross Party was a national socialist party led by Ferenc Szálasi, which led in Hungary a government known as the Government of National Unity from October 15, 1944 to 28 March 1945...
. The symbol consists of two green double-ended arrows in a cross configuration on a white circular background, much like the German Nazi
Nazi Germany
Nazi Germany , also known as the Third Reich , but officially called German Reich from 1933 to 1943 and Greater German Reich from 26 June 1943 onward, is the name commonly used to refer to the state of Germany from 1933 to 1945, when it was a totalitarian dictatorship ruled by...
swastika
Swastika
The swastika is an equilateral cross with its arms bent at right angles, in either right-facing form in counter clock motion or its mirrored left-facing form in clock motion. Earliest archaeological evidence of swastika-shaped ornaments dates back to the Indus Valley Civilization of Ancient...
. The arrow cross symbol remains outlawed in Hungary.

A similar symbol, the Crosstar, is now used by the Nationalist Movement, a white supremacist
White supremacy
White supremacy is the belief, and promotion of the belief, that white people are superior to people of other racial backgrounds. The term is sometimes used specifically to describe a political ideology that advocates the social and political dominance by whites.White supremacy, as with racial...
group based in the United States. Both are basically the arrow cross symbol.
The source of this article is wikipedia, the free encyclopedia.  The text of this article is licensed under the GFDL.