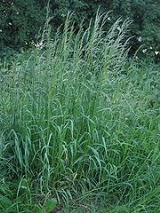 Arrhenatherum elatius, with the common names false oat-grass, tall oat-grass, tall meadow oat, onion couch and tuber oat-grass, is a perennial species of grass
Grass
Grasses, or more technically graminoids, are monocotyledonous, usually herbaceous plants with narrow leaves growing from the base. They include the "true grasses", of the Poaceae family, as well as the sedges and the rushes . The true grasses include cereals, bamboo and the grasses of lawns ...
, common in the temperate regions of Europe
Europe
Europe is, by convention, one of the world's seven continents. Comprising the westernmost peninsula of Eurasia, Europe is generally 'divided' from Asia to its east by the watershed divides of the Ural and Caucasus Mountains, the Ural River, the Caspian and Black Seas, and the waterways connecting...
.

It is native to Europe but can be found elsewhere as an introduced species
Introduced species
An introduced species — or neozoon, alien, exotic, non-indigenous, or non-native species, or simply an introduction, is a species living outside its indigenous or native distributional range, and has arrived in an ecosystem or plant community by human activity, either deliberate or accidental...
. It is found especially in prairie
Prairie
Prairies are considered part of the temperate grasslands, savannas, and shrublands biome by ecologists, based on similar temperate climates, moderate rainfall, and grasses, herbs, and shrubs, rather than trees, as the dominant vegetation type...
s, at the side of roads and in uncultivated fields. The bulbous variety can be a weed of arable land
Arable land
In geography and agriculture, arable land is land that can be used for growing crops. It includes all land under temporary crops , temporary meadows for mowing or pasture, land under market and kitchen gardens and land temporarily fallow...
. It is palatable grass for livestock
Livestock
Livestock refers to one or more domesticated animals raised in an agricultural setting to produce commodities such as food, fiber and labor. The term "livestock" as used in this article does not include poultry or farmed fish; however the inclusion of these, especially poultry, within the meaning...
and is used both as forage
Forage
Forage is plant material eaten by grazing livestock.Historically the term forage has meant only plants eaten by the animals directly as pasture, crop residue, or immature cereal crops, but it is also used more loosely to include similar plants cut for fodder and carried to the animals, especially...
(pasture) and fodder
Fodder
Fodder or animal feed is any agricultural foodstuff used specifically to feed domesticated livestock such as cattle, goats, sheep, horses, chickens and pigs. Most animal feed is from plants but some is of animal origin...
(hay
Hay
Hay is grass, legumes or other herbaceous plants that have been cut, dried, and stored for use as animal fodder, particularly for grazing livestock such as cattle, horses, goats, and sheep. Hay is also fed to pets such as rabbits and guinea pigs...
and silage
Silage
Silage is fermented, high-moisture fodder that can be fed to ruminants or used as a biofuel feedstock for anaerobic digesters. It is fermented and stored in a process called ensiling or silaging, and is usually made from grass crops, including corn , sorghum or other cereals, using the entire...
); it has high amounts of phosphorus
Phosphorus
Phosphorus is the chemical element that has the symbol P and atomic number 15. A multivalent nonmetal of the nitrogen group, phosphorus as a mineral is almost always present in its maximally oxidized state, as inorganic phosphate rocks...
and calcium
Calcium
Calcium is the chemical element with the symbol Ca and atomic number 20. It has an atomic mass of 40.078 amu. Calcium is a soft gray alkaline earth metal, and is the fifth-most-abundant element by mass in the Earth's crust...
in its tissues.

Two subspecies have been described:

It is found on road verges, along hedges and riverbanks.

This course grass can grow to 150cm tall. The leaves are bright green, broad, slightly hairy and rough. The ligule
Ligule
A ligule — is a thin outgrowth at the junction of leaf and leafstalk of many grasses and sedges or a strap-shaped corolla, such as that of a ray floret in plants in the daisy family....
is 3mm long and smooth edged. The panicle
Panicle
A panicle is a compound raceme, a loose, much-branched indeterminate inflorescence with pedicellate flowers attached along the secondary branches; in other words, a branched cluster of flowers in which the branches are racemes....
is up to 30cm, and the bunched spikelet have projecting and angled awn
Awn
In botany, an awn is either a hair- or bristle-like appendage on a larger structure, or in the case of the Asteraceae, a stiff needle-like element of the pappus....
s up to 17mm long, green or puplish. The panicles often remain into winter. The spikelets are oblong or gaping. It flowers from June to September.

The roots are yellow.