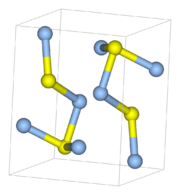 Argentite was primarily treated as a mineral
Mineral
A mineral is a naturally occurring solid chemical substance formed through biogeochemical processes, having characteristic chemical composition, highly ordered atomic structure, and specific physical properties. By comparison, a rock is an aggregate of minerals and/or mineraloids and does not...
belonging to the galena
Galena
Galena is the natural mineral form of lead sulfide. It is the most important lead ore mineral.Galena is one of the most abundant and widely distributed sulfide minerals. It crystallizes in the cubic crystal system often showing octahedral forms...
group, cubic silver
Silver
Silver is a metallic chemical element with the chemical symbol Ag and atomic number 47. A soft, white, lustrous transition metal, it has the highest electrical conductivity of any element and the highest thermal conductivity of any metal...
sulfide
Sulfide
A sulfide is an anion of sulfur in its lowest oxidation state of 2-. Sulfide is also a slightly archaic term for thioethers, a common type of organosulfur compound that are well known for their bad odors.- Properties :...
(Ag2S
Silver sulfide
Silver sulfide, Ag2S, is the sulfide of silver. This dense black solid constitutes the tarnish that forms over time on silverware and other silver objects. Silver sulfide is insoluble in all solvents, but is degraded by strong acids. Silver sulfide features a covalent bond, as it is made up of...
), occasionally found as uneven cube
Cube
In geometry, a cube is a three-dimensional solid object bounded by six square faces, facets or sides, with three meeting at each vertex. The cube can also be called a regular hexahedron and is one of the five Platonic solids. It is a special kind of square prism, of rectangular parallelepiped and...
s and octahedra
Octahedron
In geometry, an octahedron is a polyhedron with eight faces. A regular octahedron is a Platonic solid composed of eight equilateral triangles, four of which meet at each vertex....
, but more often as dendritic or earthy masses, with a blackish lead-grey color and metallic lustre. All these forms are structurally not argentite, but its monoclinic polymorph, acanthite
Acanthite
Acanthite, Ag2S, crystallizes in the monoclinic system and is the stable form of silver sulfide below 173 °C. Argentite is the stable form above that temperature. As argentite cools below that temperature its cubic form is distorted to the monoclinic form of acanthite. Below 173 °C...
. Due to instability in normal air temperature, the IMA
IMA
- Institutions :* Indianapolis Museum of Art, an art museum in Indianapolis, Indiana* Indian Medical Association* Indian Military Academy, Dehradun...
commission decided to reject this mineral, which now is a discredited mineral species.