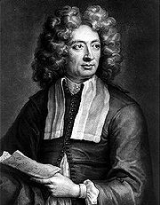 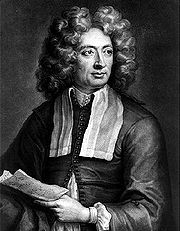 Arcangelo Corelli was an Italian violin
Violin
The violin is a string instrument, usually with four strings tuned in perfect fifths. It is the smallest, highest-pitched member of the violin family of string instruments, which includes the viola and cello....
ist and composer
Composer
A composer is a person who creates music, either by musical notation or oral tradition, for interpretation and performance, or through direct manipulation of sonic material through electronic media...
of Baroque music
Baroque music
Baroque music describes a style of Western Classical music approximately extending from 1600 to 1760. This era follows the Renaissance and was followed in turn by the Classical era...
.

Corelli was born at Fusignano
Fusignano
Fusignano is a comune in the province of Ravenna in Italy. It is near Senio River is located near Fusignano where the Allied crossing occurred on April 9, 1945.-History:...
, in the current-day province of Ravenna
Ravenna
Ravenna is the capital city of the Province of Ravenna in the Emilia-Romagna region of Italy and the second largest comune in Italy by land area, although, at , it is little more than half the size of the largest comune, Rome...
, although at the time it was in the province of Ferrara. Little is known about his early life. His master on the violin was Giovanni Battista Bassani
Giovanni Battista Bassani
Giovanni Battista Bassani was an Italian composer, violinist, and organist.Battista was born in Padua. It is thought that he studied in Venice under Daniele Castrovillari and in Ferrara under Giovanni Legrenzi. Charles Burney and John Hawkins claimed he taught Arcangelo Corelli, but there is no...
, while Matteo Simonelli, the well-known singer of the pope's chapel, taught him composition. 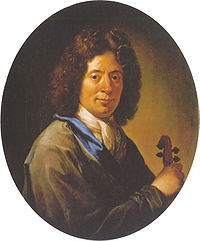 In 1685 Corelli was in Rome, where he led the festival performances of music for Queen Christina of Sweden; he was also a favorite of Cardinal Pietro Ottoboni, grandnephew of another Cardinal Pietro Ottoboni, who in 1689 became Pope Alexander VIII
Pope Alexander VIII
Pope Alexander VIII , born Pietro Vito Ottoboni, was Pope from 1689 to 1691.-Early life:Pietro Ottoboni was born of a noble Venetian family, and was the son of Marco Ottoboni, chancellor of the Republic of Venice...
. From 1689 to 1690 he was in Modena
Modena
Modena is a city and comune on the south side of the Po Valley, in the Province of Modena in the Emilia-Romagna region of Italy....
; the Duke of Modena was generous to him. In 1708 he returned to Rome, living in the palace of Cardinal Ottoboni. His visit to Naples, at the invitation of the king, took place in the same year.

The style of execution introduced by Corelli and preserved by his pupils, such as Francesco Geminiani
Francesco Geminiani
thumb|230px|Francesco Geminiani.Francesco Saverio Geminiani was an Italian violinist, composer, and music theorist.-Biography:...
, Pietro Locatelli
Pietro Locatelli
Pietro Antonio Locatelli was an Italian composer and violinist.-Biography:Locatelli was born in Bergamo, Italy. A child prodigy on the violin, he was sent to study in Rome under the direction of Arcangelo Corelli...
, and many others, was of vital importance for the development of violin playing. It has been said that the paths of all of the famous violinist-composers of 18th-century Italy led to Arcangelo Corelli who was their "iconic point of reference". 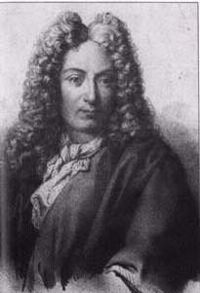 However, Corelli used only a limited portion of his instrument's capabilities. This may be seen from his writings; the parts for violin very rarely proceed above D on the highest string, sometimes reaching the E in fourth position on the highest string. The story has been told and retold that Corelli refused to play a passage that extended to A in altissimo in the overture to Handel
George Frideric Handel
George Frideric Handel was a German-British Baroque composer, famous for his operas, oratorios, anthems and organ concertos. Handel was born in 1685, in a family indifferent to music...
's oratorio
Oratorio
An oratorio is a large musical composition including an orchestra, a choir, and soloists. Like an opera, an oratorio includes the use of a choir, soloists, an ensemble, various distinguishable characters, and arias...
The Triumph of Time and Truth
The Triumph of Time and Truth
The Triumph of Time and Truth is an oratorio by George Frideric Handel which saw three iterations across 50 years of Handel's career.HWV 46a is an Italian oratorio from 1707. In 1737 Handel revised and expanded the oratorio to create HWV 46b...
(premiered in Rome, 1708), and felt seriously offended when the composer (32 years his junior) played the note.

Nevertheless, his compositions for the instrument mark an epoch in the history of chamber music
Chamber music
Chamber music is a form of classical music, written for a small group of instruments which traditionally could be accommodated in a palace chamber. Most broadly, it includes any art music that is performed by a small number of performers with one performer to a part...
. His influence was not confined to his own country. Johann Sebastian Bach
Johann Sebastian Bach
Johann Sebastian Bach was a German composer, organist, harpsichordist, violist, and violinist whose sacred and secular works for choir, orchestra, and solo instruments drew together the strands of the Baroque period and brought it to its ultimate maturity...
studied the works of Corelli and based an organ fugue (BWV 579) on Corelli's Opus 3 of 1689.

Musical society in Rome also owed much to Corelli. He was received in the highest circles of the aristocracy, and for a long time presided at the celebrated Monday concerts in the palace of Cardinal Ottoboni.

Corelli died in possession of a fortune of 120,000 marks and a valuable collection of pictures, the only luxury in which he had indulged. He left both to his benefactor and friend, who generously made over the money to Corelli's relatives. Corelli is buried in the Pantheon at Rome
Pantheon, Rome
The Pantheon ,Rarely Pantheum. This appears in Pliny's Natural History in describing this edifice: Agrippae Pantheum decoravit Diogenes Atheniensis; in columnis templi eius Caryatides probantur inter pauca operum, sicut in fastigio posita signa, sed propter altitudinem loci minus celebrata.from ,...
. One can still trace back many generations of violinists from student to teacher to Corelli (the "Corelli school").

His compositions are distinguished by a beautiful flow of melody and by a mannerly treatment of the accompanying parts, which he is justly said to have liberated from the strict rules of counterpoint
Counterpoint
In music, counterpoint is the relationship between two or more voices that are independent in contour and rhythm and are harmonically interdependent . It has been most commonly identified in classical music, developing strongly during the Renaissance and in much of the common practice period,...
.

Corelli composed 48 trio sonata
Trio sonata
The trio sonata is a musical form that was popular in the 17th and early 18th centuries.A trio sonata is written for two solo melodic instruments and basso continuo, making three parts in all, hence the name trio sonata...
s, 12 violin and continuo sonatas, and 12 concerti grossi.