Aquatic respiration is the process
Biological process
A biological process is a process of a living organism. Biological processes are made up of any number of chemical reactions or other events that results in a transformation....
whereby an aquatic animal
Aquatic animal
An aquatic animal is an animal, either vertebrate or invertebrate, which lives in water for most or all of its life. It may breathe air or extract its oxygen from that dissolved in water through specialised organs called gills, or directly through its skin. Natural environments and the animals that...
obtains oxygen
Oxygen
Oxygen is the element with atomic number 8 and represented by the symbol O. Its name derives from the Greek roots ὀξύς and -γενής , because at the time of naming, it was mistakenly thought that all acids required oxygen in their composition...
from water
Water
Water is a chemical substance with the chemical formula H2O. A water molecule contains one oxygen and two hydrogen atoms connected by covalent bonds. Water is a liquid at ambient conditions, but it often co-exists on Earth with its solid state, ice, and gaseous state . Water also exists in a...
.

In most fish respiration takes place through gills. Lungfish
Lungfish
Lungfish are freshwater fish belonging to the Subclass Dipnoi. Lungfish are best known for retaining characteristics primitive within the Osteichthyes, including the ability to breathe air, and structures primitive within Sarcopterygii, including the presence of lobed fins with a well-developed...
, however, possess one or two lungs. The labyrinth fish
Anabantoidei
The Anabantoidei is a suborder of perciform ray-finned freshwater fish distinguished by their possession of a lung-like labyrinth organ, which enables them to breathe air. The fish in the Anabantoidei suborder are known as anabantoids or labyrinth fish...
have developed a special organ that allows them to take advantage of the oxygen of the air, but is not a true lung.

The anatomical structure
Anatomy
Anatomy is a branch of biology and medicine that is the consideration of the structure of living things. It is a general term that includes human anatomy, animal anatomy , and plant anatomy...
of the lungs is less complex in reptiles than in mammals, with reptiles lacking the very extensive airway tree structure found in mammalian lungs. Gas exchange
Gas exchange
Gas exchange is a process in biology where gases contained in an organism and atmosphere transfer or exchange. In human gas-exchange, gases contained in the blood of human bodies exchange with gases contained in the atmosphere. Human gas-exchange occurs in the lungs...
in reptiles still occurs in alveoli however, reptiles do not possess a diaphragm
Thoracic diaphragm
In the anatomy of mammals, the thoracic diaphragm, or simply the diaphragm , is a sheet of internal skeletal muscle that extends across the bottom of the rib cage. The diaphragm separates the thoracic cavity from the abdominal cavity and performs an important function in respiration...
. Thus, breathing occurs via a change in the volume of the body cavity which is controlled by contraction of intercostal muscles in all reptiles except turtles. In turtles, contraction of specific pairs of flank muscles governs inspiration
Inhalation
Inhalation is the movement of air from the external environment, through the air ways, and into the alveoli....
or expiration
Exhalation
Exhalation is the movement of air out of the bronchial tubes, through the airways, to the external environment during breathing....
.

See also reptiles for more detailed descriptions of the respiratory system in these animals.

Both the lungs and the skin serve as respiratory organs in amphibians. The skin of these animals is highly vascularized and moist, with moisture maintained via secretion of mucus
Mucus
In vertebrates, mucus is a slippery secretion produced by, and covering, mucous membranes. Mucous fluid is typically produced from mucous cells found in mucous glands. Mucous cells secrete products that are rich in glycoproteins and water. Mucous fluid may also originate from mixed glands, which...
from specialized cells. While the lungs are of primary importance to breathing control, the skin's unique properties aid rapid gas exchange when amphibians are submerged in oxygen-rich water.

The respiratory system of birds differs significantly from that found in mammals, containing unique anatomical features such as air sacs. The lungs of birds also do not have the capacity to inflate as birds lack a diaphragm
Thoracic diaphragm
In the anatomy of mammals, the thoracic diaphragm, or simply the diaphragm , is a sheet of internal skeletal muscle that extends across the bottom of the rib cage. The diaphragm separates the thoracic cavity from the abdominal cavity and performs an important function in respiration...
and a pleural cavity
Pleural cavity
In human anatomy, the pleural cavity is the potential space between the two pleura of the lungs. The pleura is a serous membrane which folds back onto itself to form a two-layered, membrane structure. The thin space between the two pleural layers is known as the pleural cavity; it normally...
. Gas exchange in birds occurs between air capillaries and blood capillaries
Capillary
Capillaries are the smallest of a body's blood vessels and are parts of the microcirculation. They are only 1 cell thick. These microvessels, measuring 5-10 μm in diameter, connect arterioles and venules, and enable the exchange of water, oxygen, carbon dioxide, and many other nutrient and waste...
, rather than in alveoli. See Avian respiratory system for a detailed description of these and other features. 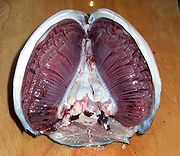 Large aquatic animals have developed gill
Gill
A gill is a respiratory organ found in many aquatic organisms that extracts dissolved oxygen from water, afterward excreting carbon dioxide. The gills of some species such as hermit crabs have adapted to allow respiration on land provided they are kept moist...
s for respiration
Respiration (physiology)
'In physiology, respiration is defined as the transport of oxygen from the outside air to the cells within tissues, and the transport of carbon dioxide in the opposite direction...
which are specifically adapted to their function, for example, they have:
In osteichthyes
Osteichthyes
Osteichthyes , also called bony fish, are a taxonomic group of fish that have bony, as opposed to cartilaginous, skeletons. The vast majority of fish are osteichthyes, which is an extremely diverse and abundant group consisting of over 29,000 species...
, the gills contain 4 gill arches on each side of the head, two on each side for chondrichthyes
Chondrichthyes
Chondrichthyes or cartilaginous fishes are jawed fish with paired fins, paired nares, scales, two-chambered hearts, and skeletons made of cartilage rather than bone...
or 7 gill baskets on each side of the fish's head in Lampreys
In fish, the long bony cover for the gill (the operculum
Operculum (fish)
The operculum of a bony fish is the hard bony flap covering and protecting the gills. In most fish, the rear edge of the operculum roughly marks the division between the head and the body....
) can be used for pushing water. Some fish pump water using the operculum. Without an operculum, other methods, such as ventilation
Ventilation (physiology)
In respiratory physiology, ventilation is the rate at which gas enters or leaves the lung. It is categorized under the following definitions:-Sample values:...
, are required. Some species of shark
Shark
Sharks are a type of fish with a full cartilaginous skeleton and a highly streamlined body. The earliest known sharks date from more than 420 million years ago....
s use this system. When they swim, water flows into the mouth and across the gills. Because these sharks rely on this technique, they must keep swimming in order to respire.

Bony fish use countercurrent flow
Countercurrent exchange
Countercurrent exchange is a mechanism occurring in nature and mimicked in industry and engineering, in which there is a crossover of some property, usually heat or some component, between two flowing bodies flowing in opposite directions to each other. The flowing bodies can be liquids, gases, or...
to maximize the intake of oxygen that can diffuse
Diffusion
Molecular diffusion, often called simply diffusion, is the thermal motion of all particles at temperatures above absolute zero. The rate of this movement is a function of temperature, viscosity of the fluid and the size of the particles...
through the gill. Countercurrent flow occurs when deoxygenated blood moves through the gill in one direction while oxygenated water moves through the gill in the opposite direction. This mechanism maintains the concentration gradient thus increasing the efficiency of the respiration process as well and prevents the oxygen levels from reachin an equilibrium
Chemical equilibrium
In a chemical reaction, chemical equilibrium is the state in which the concentrations of the reactants and products have not yet changed with time. It occurs only in reversible reactions, and not in irreversible reactions. Usually, this state results when the forward reaction proceeds at the same...
. Cartilaginous fish do not have a countercurrent flow system as they lack bones which are needed to have the opened out gill that bony fish have.

Scientists have investigated what part of the body is responsible for maintaining the respiratory rhythm. They found that neuron
Neuron
A neuron is an electrically excitable cell that processes and transmits information by electrical and chemical signaling. Chemical signaling occurs via synapses, specialized connections with other cells. Neurons connect to each other to form networks. Neurons are the core components of the nervous...
s located in the
brainstem of fish are responsible for the genesis of the respiratory rhythm. The position of these neurons is slightly different from the centers of respiratory genesis in mammals but they are located in the same brain compartment, which has caused debates about the homology
Homology (biology)
Homology forms the basis of organization for comparative biology. In 1843, Richard Owen defined homology as "the same organ in different animals under every variety of form and function". Organs as different as a bat's wing, a seal's flipper, a cat's paw and a human hand have a common underlying...
of respiratory centers between aquatic and terrestrial species. In both aquatic and terrestrial respiration, the exact mechanisms by which neurons can generate this involuntary rhythm are still not completely understood (see Involuntary control of respiration).

Another important feature of the respiratory rhythm is that it is modulated to adapt to the oxygen consumption of the body. As observed in mammals, fish “breathe” faster and heavier when they do physical exercise. The mechanisms by which these changes occur have been strongly debated over more than 100 years between scientists. The authors can be classified in 2 schools:

Many now agree that both mechanisms are probably present and complementary, or working alongside a mechanism that can detect changes in oxygen and/or carbon dioxide blood saturation.