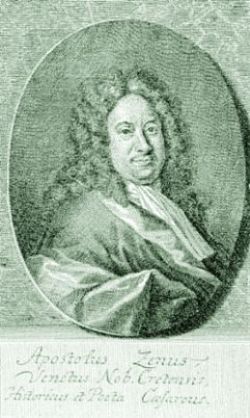 Apostolo Zeno was a Venetian poet, librettist, journalist, and man of letters.

Apostolo Zeno was born of Cretan Greek
Greeks
The Greeks, also known as the Hellenes , are a nation and ethnic group native to Greece, Cyprus and neighboring regions. They also form a significant diaspora, with Greek communities established around the world....
descent in Venice in 1669. His father was Pietro Zeno a doctor of medicine and his mother, Caterina Sevasto, belonged to the Sevasti, an illustrious and powerful Greek family of Candia
Candia
-Places:* The old Venetian name for Heraklion, Crete* Kingdom of Candia, colony of the Republic of Venice * Candia Canavese, Italy* Candia Lomellina, Italy...
, Crete
Crete
Crete is the largest and most populous of the Greek islands, the fifth largest island in the Mediterranean Sea, and one of the thirteen administrative regions of Greece. It forms a significant part of the economy and cultural heritage of Greece while retaining its own local cultural traits...
.

A Venetian nobleman, he was in 1691 among the founders of the Accademia degli Animosi. In 1695, he composed his first libretto
Libretto
A libretto is the text used in an extended musical work such as an opera, operetta, masque, oratorio, cantata, or musical. The term "libretto" is also sometimes used to refer to the text of major liturgical works, such as mass, requiem, and sacred cantata, or even the story line of a...
, Gli inganni felici, which obtained great success, making him a fashionable librettist. From 1705, he worked with Pietro Pariati, keeping the theatrical scenes for himself and leaving to Pariati the composition of the libretti.

He began work as a literary journalist for the Galleria di Minerva, also taking upon executive responsibilities, but distanced himself when he realized that he had not succeeded in making the impact upon the publication that he intended. In the end he described it as an idiocy.

In 1710 together with Scipione Maffei, Antonio Vallisneri
Antonio Vallisneri
Antonio Vallisneri was an Italian medical scientist, physician and naturalist.-Life:Vallisneri was born in Trassilico, a small village in Garfagnana, and graduated in medicine in 1684, in Reggio Emilia, under the guidance of Marcello Malpighi.He studied at Bologna, Venice, Padua and Parma and held...
and his brother, Pier Caterino Zeno, he founded the Giornale de' letterati d'Italia, maintaining that it was necessary that "Italians themselves make their own newspaper... revealing that good sense, erudition and ingenuity never were lacking among us, and now more than ever are they flourishing."

The tri-monthly publication had prestigious contributors such as Scipione Maffei, Antonio Vallisneri, Eustachio Manfredi, Ludovico Antonio Muratori
Ludovico Antonio Muratori
Ludovico Antonio Muratori was an Italian historian, notable as a leading scholar of his age, and for his discovery of the Muratorian fragment, the earliest known list of New Testament books....
, Giovanni Battista Morgagni
Giovanni Battista Morgagni
Giovanni Battista Morgagni was an Italian anatomist, celebrated as the father of modern anatomical pathology.-Education:...
, Giovan Battista Vico, Bernardino Ramazzini
Bernardino Ramazzini
Bernardino Ramazzini was an Italian physician.Ramazzini was an early proponent of the use of cinchona bark in the treatment of Malaria...
. Motivated above all by the desire to improve Italian learning, it enjoyed considerable success.

When Apostolo Zeno was called to duty as poet laureate to the imperial court of Vienna
Vienna
Vienna is the capital and largest city of the Republic of Austria and one of the nine states of Austria. Vienna is Austria's primary city, with a population of about 1.723 million , and is by far the largest city in Austria, as well as its cultural, economic, and political centre...
in 1718, his brother, Pier Caterino took over the direction until 1732, publishing the periodical annually. Apostolo remained in Vienna until 1729, at which point he was replaced by Pietro Metastasio. He returned to Venice, dedicating himself to works of erudition and to coin-collecting.

Zeno wrote the libretti for 36 operas with historical and mythological themes, including Gli inganni felici (1695), Faramondo (1698), Lucio Vero (1700), Griselda (1701), Merope (1711), Alessandro Severo (1716), Teuzzone (1719), and Semiramide (1725), as well as 17 oratorios. Among his literary works, the Dissertazioni vossiane are additions and corrections to De historicis latinis by Voss. His Annotazioni to the Biblioteca della eloquenza italiana by Giusto Fontanini were published posthumously. His correspondence (Epistolario) is ample.

From condemnation of the unrealistic and exaggerated elements of melodrama
Melodrama
The term melodrama refers to a dramatic work that exaggerates plot and characters in order to appeal to the emotions. It may also refer to the genre which includes such works, or to language, behavior, or events which resemble them...
was born a demand for greater verisimilitude in plots and for literary dignity in texts. Zeno was the first to undertake reform to make melodrama more sober, according to the arcadici principles, developed further by Metastasio. Inspired by French tragedians, he respected, as they did, the rule of the unity of time and space. He reduced the number of characters and scenes and eliminated the clown roles, constructing his works so that they could be presented also without music.

Francesco de Sanctis, referring to Metastasio, wrote that "if we look at the structure, his drama is constructed in the fashion which Apostolo Zeno already demonstrated. But the structure is only a simple skeleton. Metastasio breathed into that skeleton the grace and the romance of a happy and harmonious life. He was the poet of melodrama; Zeno was the architect."
The source of this article is wikipedia, the free encyclopedia.  The text of this article is licensed under the GFDL.