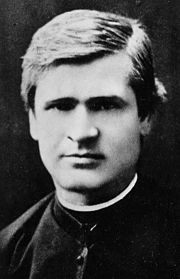 Antanas Baranauskas was a Lithuanian poet
Poet
A poet is a person who writes poetry. A poet's work can be literal, meaning that his work is derived from a specific event, or metaphorical, meaning that his work can take on many meanings and forms. Poets have existed since antiquity, in nearly all languages, and have produced works that vary...
, mathematician
Mathematician
A mathematician is a person whose primary area of study is the field of mathematics. Mathematicians are concerned with quantity, structure, space, and change....
and a catholic bishop
Bishop
A bishop is an ordained or consecrated member of the Christian clergy who is generally entrusted with a position of authority and oversight. Within the Catholic Church, Eastern Orthodox, Oriental Orthodox Churches, in the Assyrian Church of the East, in the Independent Catholic Churches, and in the...
of Polish town Sejny
Sejny
Sejny is a town in north-eastern Poland, in Podlaskie Voivodeship, close to the border with Lithuania and Belarus. It is located in the eastern part of the Suwałki Lake Area , on the Marycha river, being a tributary of Czarna Hańcza...
. Baranauskas is best known as the author of the Lithuanian language poem Anykščių šilelis. He used various pseudonym
Pseudonym
A pseudonym is a name that a person assumes for a particular purpose and that differs from his or her original orthonym...
s, including A.B., Bangputys, Jurksztas Smalaūsis, Jurkštas Smalaūsis, and Baronas. He also wrote poetry in Polish
Polish language
Polish is a language of the Lechitic subgroup of West Slavic languages, used throughout Poland and by Polish minorities in other countries...
.

Baranauskas was born to a humble peasant family of Lithuanian nobility origin. Early in his youth, his parents sent him to a local parochial school
Parochial school
A parochial school is a school that provides religious education in addition to conventional education. In a narrower sense, a parochial school is a Christian grammar school or high school which is part of, and run by, a parish.-United Kingdom:...
. After finishing his studies there, Baranauskas initially remained in the parish. As described in his diary, between the years 1841-1843, he learned the Polish language
Polish language
Polish is a language of the Lechitic subgroup of West Slavic languages, used throughout Poland and by Polish minorities in other countries...
and later between 1848–1851, Russian
Russian language
Russian is a Slavic language used primarily in Russia, Belarus, Uzbekistan, Kazakhstan, Tajikistan and Kyrgyzstan. It is an unofficial but widely spoken language in Ukraine, Moldova, Latvia, Turkmenistan and Estonia and, to a lesser extent, the other countries that were once constituent republics...
as well. His first attempts to write poetry and rhyme
Rhyme
A rhyme is a repetition of similar sounds in two or more words and is most often used in poetry and songs. The word "rhyme" may also refer to a short poem, such as a rhyming couplet or other brief rhyming poem such as nursery rhymes.-Etymology:...
in Lithuanian, are to be found in his diaries. Later he attended a bi-yearly school for communal writers in Rumšiškės
Rumšiškes
Rumšiškės is a Lithuanian town , situated east of Kaunas on the northern bank of Kaunas Reservoir. Southern part of the town is now under the waters of the artificial lake. The 18th century St...
. There he started writing his first poems in Polish.

While in the seminary, Baranauskas started writing poems in Lithuanian, and from that time essentially wrote in that language. One of his earlier works written under the influence of Mickiewicz was Anykščių šilelis (The Forest/Pinewood of Anykščiai). It is considered a classic work of Lithuanian literature
Lithuanian literature
Lithuanian literature concerns the art of written works compiled by Lithuanians throughout their history.-Latin language:A wealth of Lithuanian literature was written in Latin, the main scholarly language in the Middle Ages.-Lithuanian language:...
. Literature critics consider it as a symbolic reference to Lithuania
Lithuania
Lithuania , officially the Republic of Lithuania is a country in Northern Europe, the biggest of the three Baltic states. It is situated along the southeastern shore of the Baltic Sea, whereby to the west lie Sweden and Denmark...
n history and language
Lithuanian language
Lithuanian is the official state language of Lithuania and is recognized as one of the official languages of the European Union. There are about 2.96 million native Lithuanian speakers in Lithuania and about 170,000 abroad. Lithuanian is a Baltic language, closely related to Latvian, although they...
. While some critics contend that Baranauskas wrote the poem in anger, in response to an assertion by his lector Alexander Gabszewicz that the Lithuanian language was not beautiful enough to write poems in, others dispute this as a misinterpretation. The poem was first published in 1861, and again in 1862 in Laurynas Ivinskis
Laurynas Ivinskis
Laurynas Ivinskis was a Lithuanian teacher, publisher, translator and lexicographer, from a Samogitian noble family. He is notable for a series of annual calendars published between 1847 and 1877, in which he summarized the daily life of Samogitian peasantry, Laurynas Ivinski also published...
' calendars.

From 1858 to 1862, Barnauskas studied at the Saint Petersburg Roman Catholic Theological Academy
Saint Petersburg Roman Catholic Theological Academy
The Saint Petersburg Roman Catholic Theological Academy was an institution of higher education preparing Roman Catholic theologians in the Russian Empire. The Academy granted master's and doctorate degrees in theology and was designed to prepare officers for senior positions in the Catholic Church...
, receiving a Masters degree in theology
Theology
Theology is the systematic and rational study of religion and its influences and of the nature of religious truths, or the learned profession acquired by completing specialized training in religious studies, usually at a university or school of divinity or seminary.-Definition:Augustine of Hippo...
. Between 1863-1864, he studied at Munich
Munich
Munich The city's motto is "" . Before 2006, it was "Weltstadt mit Herz" . Its native name, , is derived from the Old High German Munichen, meaning "by the monks' place". The city's name derives from the monks of the Benedictine order who founded the city; hence the monk depicted on the city's coat...
's, Rome
Rome
Rome is the capital of Italy and the country's largest and most populated city and comune, with over 2.7 million residents in . The city is located in the central-western portion of the Italian Peninsula, on the Tiber River within the Lazio region of Italy.Rome's history spans two and a half...
's, Innsbruck's and Louvain’s
Catholic University of Leuven
The Catholic University of Leuven, or of Louvain, was the largest, oldest and most prominent university in Belgium. The university was founded in 1425 as the University of Leuven by John IV, Duke of Brabant and approved by a Papal bull by Pope Martin V.During France's occupation of Belgium in the...
Catholic universities.

Starting in 1871, he worked at the Kaunas Priest Seminary
Kaunas Priest Seminary
Kaunas Priest Seminary is the largest seminary in Lithuania serving the Roman Catholic Archdiocese of Kaunas. It is part of the Faculty of Theology of Vytautas Magnus University. Its current rector is Aurelijus Žukauskas. As of 2007, the seminary had 35 students...
, and began teaching the Lithuanian language. He authored a grammar textbook in Lithuanian, Mokslas lietuviškosios kalbos. After Baranauskas went to Sejny
Sejny
Sejny is a town in north-eastern Poland, in Podlaskie Voivodeship, close to the border with Lithuania and Belarus. It is located in the eastern part of the Suwałki Lake Area , on the Marycha river, being a tributary of Czarna Hańcza...
, he gained a considerable reputation by being able to preach in both Polish and Lithuanian. By 1880, after he realized that the ban of printing in the Lithuanian language
Lithuanian press ban
The Lithuanian press ban was a ban on all Lithuanian language publications printed in the Latin alphabet within the Russian Empire, which controlled Lithuania at the time. Lithuanian-language publications that used the Cyrillic alphabet were allowed and even encouraged...
would not be lifted, in spite of several unofficial promises by Tsarist authorities to do so, his desire to promote the Lithuanian language slowly declined. He never ceased to believe, that Lithuanian should be developed and expanded and until his death worked on a translation of the Bible
Bible
The Bible refers to any one of the collections of the primary religious texts of Judaism and Christianity. There is no common version of the Bible, as the individual books , their contents and their order vary among denominations...
into Lithuanian, and working 10–12 hours a day, succeeded to translate three fifths of the Old Testament.

In his later years, Antanas Baranauskas, enjoyed some of the comforts of life. His beliefs were similar to the later Krajowcy
Krajowcy
The Krajowcy was a group of mainly Polish-speaking intellectuals from the Vilnius Region who, in the beginning of the 20th century, opposed the division of the former Polish–Lithuanian Commonwealth into nation states along ethnic and linguistic lines. It was a reactionary movement against growing...
group. Therefore for the rest of his life he tried to reconcile nationalists from both - Lithuanian and Polish - sides. For that he was rather unpopular amongst the nationalists in both sides.

Most of the Lithuanians did not attend his burial, considering him a traitor of the national revival movement, mostly Russian officials and Poles attended it. It was a completely different story when a monument for him was built in Sejny
Sejny
Sejny is a town in north-eastern Poland, in Podlaskie Voivodeship, close to the border with Lithuania and Belarus. It is located in the eastern part of the Suwałki Lake Area , on the Marycha river, being a tributary of Czarna Hańcza...
. Only Lithuanians attended the event, and even then paint was spilt on the monument the following night.

Before Baranauskas, the main "respectable" languages in the area were considered to be Russian and Polish, so Baranauskas was one of the few primary individuals responsible for re-legitimizing the Lithuanian language, and by extension, Lithuanian culture. Referring to Baranauskas in a lecture, the early 20th century Lithuanian poet Maironis
Maironis
Maironis is one of the most famous Lithuanian romantic poets. He was born in Pasandravys, Raseiniai district municipality, Lithuania. Maironis graduated from Kaunas high school and went on to study Literature at Kiev University. However, in 1884, after one year of studies at the university, he...
once said, "Without him, there might not be us".