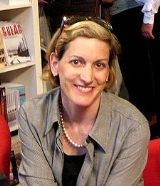 Encyclopedia
Anne Elizabeth Applebaum (born July 25, 1964 in Washington, D.C.) is a journalist
Journalism
Journalism is the practice of investigation and reporting of events, issues and trends to a broad audience in a timely fashion. Though there are many variations of journalism, the ideal is to inform the intended audience. Along with covering organizations and institutions such as government and...
and Pulitzer Prize
Pulitzer Prize
The Pulitzer Prize is a U.S. award for achievements in newspaper and online journalism, literature and musical composition. It was established by American publisher Joseph Pulitzer and is administered by Columbia University in New York City...
-winning author
Author
An author is broadly defined as "the person who originates or gives existence to anything" and that authorship determines responsibility for what is created. Narrowly defined, an author is the originator of any written work.-Legal significance:...
who has written extensively about communism
Marxism-Leninism
Marxism–Leninism is a communist ideology, officially based upon the theories of Marxism and Vladimir Lenin, that promotes the development and creation of a international communist society through the leadership of a vanguard party over a revolutionary socialist state that represents a dictatorship...
and the development of civil society
Civil society
Civil society is composed of the totality of many voluntary social relationships, civic and social organizations, and institutions that form the basis of a functioning society, as distinct from the force-backed structures of a state , the commercial institutions of the market, and private criminal...
in Central
Central Europe
Central Europe or alternatively Middle Europe is a region of the European continent lying between the variously defined areas of Eastern and Western Europe...
and Eastern Europe
Eastern Europe
Eastern Europe is the eastern part of Europe. The term has widely disparate geopolitical, geographical, cultural and socioeconomic readings, which makes it highly context-dependent and even volatile, and there are "almost as many definitions of Eastern Europe as there are scholars of the region"...
. She has been an editor at The Economist
The Economist
The Economist is an English-language weekly news and international affairs publication owned by The Economist Newspaper Ltd. and edited in offices in the City of Westminster, London, England. Continuous publication began under founder James Wilson in September 1843...
, and a member of the editorial board
Editorial board
The editorial board is a group of people, usually at a publication, who dictate the tone and direction the publication's editorial policy will take.- Board makeup :...
of The Washington Post
The Washington Post
The Washington Post is Washington, D.C.'s largest newspaper and its oldest still-existing paper, founded in 1877. Located in the capital of the United States, The Post has a particular emphasis on national politics. D.C., Maryland, and Virginia editions are printed for daily circulation...
(2002–2006). She is married to Foreign Minister of Poland Radosław Sikorski.

Her parents are Harvey M. Applebaum, a Covington and Burling partner, and Elizabeth Applebaum of the Corcoran Gallery of Art
Corcoran Gallery of Art
The Corcoran Gallery of Art is the largest privately supported cultural institution in Washington, DC. The museum's main focus is American art. The permanent collection includes works by Rembrandt, Eugène Delacroix, Edgar Degas, Thomas Gainsborough, John Singer Sargent, Claude Monet, Pablo...
. She graduated from the Sidwell Friends School
Sidwell Friends School
Sidwell Friends School is a Quaker private school located in Bethesda, Maryland and Washington, D.C., offering pre-kindergarten through secondary school classes. Founded in 1883 by Thomas Sidwell, its motto is "Eluceat omnibus lux" , alluding to the Quaker concept of inner light...
(1982). She earned a B.A.
Bachelor of Arts
A Bachelor of Arts , from the Latin artium baccalaureus, is a bachelor's degree awarded for an undergraduate course or program in either the liberal arts, the sciences, or both...
(summa cum laude) at Yale University
Yale University
Yale University is a private, Ivy League university located in New Haven, Connecticut, United States. Founded in 1701 in the Colony of Connecticut, the university is the third-oldest institution of higher education in the United States...
(1986), where she was elected to Phi Beta Kappa. As a Marshall Scholar
Marshall Scholarship
The Marshall Scholarship, a postgraduate scholarships available to Americans, was created by the Parliament of the United Kingdom when the Marshall Aid Commemoration Act was passed in 1953. The scholarships serve as a living gift to the United States of America in recognition of the post-World War...
at the London School of Economics
London School of Economics
The London School of Economics and Political Science is a public research university specialised in the social sciences located in London, United Kingdom, and a constituent college of the federal University of London...
she earned a master's degree
Master's degree
A master's is an academic degree granted to individuals who have undergone study demonstrating a mastery or high-order overview of a specific field of study or area of professional practice...
in international relations
International relations
International relations is the study of relationships between countries, including the roles of states, inter-governmental organizations , international nongovernmental organizations , non-governmental organizations and multinational corporations...
(1987). She studied at St Antony's College, Oxford
St Antony's College, Oxford
St Antony's College is one of the constituent colleges of the University of Oxford in England.St Antony's is the most international of the seven all-graduate colleges of the University of Oxford, specialising in international relations, economics, politics, and history of particular parts of the...
before moving to Warsaw, Poland in 1988 as a correspondent for The Economist
The Economist
The Economist is an English-language weekly news and international affairs publication owned by The Economist Newspaper Ltd. and edited in offices in the City of Westminster, London, England. Continuous publication began under founder James Wilson in September 1843...
.

Applebaum was an editor at The Spectator
The Spectator
The Spectator is a weekly British magazine first published on 6 July 1828. It is currently owned by David and Frederick Barclay, who also owns The Daily Telegraph. Its principal subject areas are politics and culture...
, and a columnist for both the Daily Telegraph and Sunday Telegraph
Sunday Telegraph
The Sunday Telegraph is a British broadsheet newspaper, founded in February 1961. It is the sister paper of The Daily Telegraph, but is run separately with a different editorial staff, although there is some cross-usage of stories...
. She also wrote for The Independent
The Independent
The Independent is a British national morning newspaper published in London by Independent Print Limited, owned by Alexander Lebedev since 2010. It is nicknamed the Indy, while the Sunday edition, The Independent on Sunday, is the Sindy. Launched in 1986, it is one of the youngest UK national daily...
. Working for The Economist
The Economist
The Economist is an English-language weekly news and international affairs publication owned by The Economist Newspaper Ltd. and edited in offices in the City of Westminster, London, England. Continuous publication began under founder James Wilson in September 1843...
, she provided coverage of important social and political transitions in Eastern Europe, both before and after the Fall of the Berlin Wall in 1989. In 1992, she was awarded the Charles Douglas-Home Memorial Trust Award.

Applebaum lived in London and Warsaw
Warsaw
Warsaw is the capital and largest city of Poland. It is located on the Vistula River, roughly from the Baltic Sea and from the Carpathian Mountains. Its population in 2010 was estimated at 1,716,855 residents with a greater metropolitan area of 2,631,902 residents, making Warsaw the 10th most...
during the 1990s, and was for several years a widely read columnist for London's Evening Standard
Evening Standard
The Evening Standard, now styled the London Evening Standard, is a free local daily newspaper, published Monday–Friday in tabloid format in London. It is the dominant regional evening paper for London and the surrounding area, with coverage of national and international news and City of London...
newspaper. She wrote about the workings of Westminster
Parliament of the United Kingdom
The Parliament of the United Kingdom of Great Britain and Northern Ireland is the supreme legislative body in the United Kingdom, British Crown dependencies and British overseas territories, located in London...
, and opined on issues foreign and domestic.

Applebaum is fluent in English
English language
English is a West Germanic language that arose in the Anglo-Saxon kingdoms of England and spread into what was to become south-east Scotland under the influence of the Anglian medieval kingdom of Northumbria...
, French
French language
French is a Romance language spoken as a first language in France, the Romandy region in Switzerland, Wallonia and Brussels in Belgium, Monaco, the regions of Quebec and Acadia in Canada, and by various communities elsewhere. Second-language speakers of French are distributed throughout many parts...
, Polish
Polish language
Polish is a language of the Lechitic subgroup of West Slavic languages, used throughout Poland and by Polish minorities in other countries...
and Russian
Russian language
Russian is a Slavic language used primarily in Russia, Belarus, Uzbekistan, Kazakhstan, Tajikistan and Kyrgyzstan. It is an unofficial but widely spoken language in Ukraine, Moldova, Latvia, Turkmenistan and Estonia and, to a lesser extent, the other countries that were once constituent republics...
.

On May 24, 2006, she wrote that she was leaving Washington to live again in Poland.

Applebaum was a George Herbert Walker Bush/Axel Springer
Axel Springer
Axel Springer , was a German journalist and the founder and owner of the Axel Springer AG publishing company.-Early life:...
Fellow at the American Academy in Berlin
American Academy in Berlin
The American Academy in Berlin is a research and cultural institution in Berlin whose stated mission is to foster a greater understanding and dialogue between the people of the United States and the people of Germany.The American Academy was founded in September 1994 by a group of prominent...
, Germany
Germany
Germany , officially the Federal Republic of Germany , is a federal parliamentary republic in Europe. The country consists of 16 states while the capital and largest city is Berlin. Germany covers an area of 357,021 km2 and has a largely temperate seasonal climate...
, in spring 2008. Applebaum was also an adjunct
Adjunct
Adjunct may refer to:* Adjunct , words used as modifiers* Adjunct professor, a professor who does not hold a permanent position at a particular academic institution* Adjuncts, sources of sugar used in brewing...
fellow
Fellow
A fellow in the broadest sense is someone who is an equal or a comrade. The term fellow is also used to describe a person, particularly by those in the upper social classes. It is most often used in an academic context: a fellow is often part of an elite group of learned people who are awarded...
at the American Enterprise Institute
American Enterprise Institute
The American Enterprise Institute for Public Policy Research is a conservative think tank founded in 1943. Its stated mission is "to defend the principles and improve the institutions of American freedom and democratic capitalism—limited government, private enterprise, individual liberty and...
think tank
Think tank
A think tank is an organization that conducts research and engages in advocacy in areas such as social policy, political strategy, economics, military, and technology issues. Most think tanks are non-profit organizations, which some countries such as the United States and Canada provide with tax...
.

In a short blog posting in September 2009, Applebaum condemned the 2009 arrest of Roman Polanski. Critics claimed that she minimized Polanski's crimes and did not disclose that her husband was seeking his release. She responded in a second blog post that she had previously disclosed her husband's job, was not a spokesman for him, and "had no idea that the Polish government would or could lobby for Polanski's release".

Applebaum married Polish Foreign Minister
Minister of Foreign Affairs of the Republic of Poland
The Ministry of Foreign Affairs is the Polish government department tasked with maintaining Poland's international relations and coordinating its participation in international and regional supra-national political organisations such as the European Union and United Nations. It is considered to be...
Radosław Sikorski in 1992. They have two sons: Aleksander and Tadeusz.