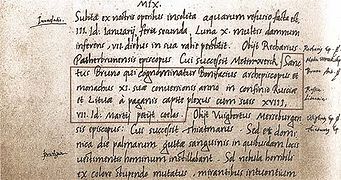 The Annals of Quedlinburg were written between 1008 and 1030 in the convent
Convent
A convent is either a community of priests, religious brothers, religious sisters, or nuns, or the building used by the community, particularly in the Roman Catholic Church and in the Anglican Communion...
of Quedlinburg Abbey
Quedlinburg Abbey
Quedlinburg Abbey was a house of secular canonesses in Quedlinburg, Saxony-Anhalt, Germany. It was founded in 936 on the initiative of Saint Mathilda, the widow of Henry the Fowler, as his memorial...
. In recent years a consensus has emerged that the annalist was a woman.The annals are mostly dedicated to the history of the Holy Roman Empire
Holy Roman Empire
The Holy Roman Empire was a realm that existed from 962 to 1806 in Central Europe.It was ruled by the Holy Roman Emperor. Its character changed during the Middle Ages and the Early Modern period, when the power of the emperor gradually weakened in favour of the princes...
; they also contain the first written mention of the name of Lithuania
Name of Lithuania
The first known record of the name of Lithuania is in a 9 March 1009 story of Saint Bruno recorded in the Quedlinburg Chronicle . The Chronicle recorded a Latinized Slavic form of the name Lietuva: Litua pronounced [litvā]...
("Litua"), dated to 1009. The original document has disappeared, surviving only as a 16th-century copy held in Dresden
Dresden
Dresden is the capital city of the Free State of Saxony in Germany. It is situated in a valley on the River Elbe, near the Czech border. The Dresden conurbation is part of the Saxon Triangle metropolitan area....
, but its contents endure as a scholarly resource.

The city of Quedlinburg
Quedlinburg
Quedlinburg is a town located north of the Harz mountains, in the district of Harz in the west of Saxony-Anhalt, Germany. In 1994 the medieval court and the old town was set on the UNESCO world heritage list....
, Germany, was first mentioned in writing in a document dated to 922. Saint Mathilda founded a religious community for women at its abbey
Quedlinburg Abbey
Quedlinburg Abbey was a house of secular canonesses in Quedlinburg, Saxony-Anhalt, Germany. It was founded in 936 on the initiative of Saint Mathilda, the widow of Henry the Fowler, as his memorial...
, serving as abbess from 966 to 999. The abbey became a premier educational institution for the female nobles of Saxony
Saxony
The Free State of Saxony is a landlocked state of Germany, contingent with Brandenburg, Saxony Anhalt, Thuringia, Bavaria, the Czech Republic and Poland. It is the tenth-largest German state in area, with of Germany's sixteen states....
, and maintained its mission for nearly 900 years. The city served as an imperial palatinate
Count palatine
Count palatine is a high noble title, used to render several comital styles, in some cases also shortened to Palatine, which can have other meanings as well.-Comes palatinus:...
of the Saxon emperors, where Henry the Fowler, the founder of the Ottonian dynasty, was buried. Quedlinburg was situated not far from Magdeburg
Magdeburg
Magdeburg , is the largest city and the capital city of the Bundesland of Saxony-Anhalt, Germany. Magdeburg is situated on the Elbe River and was one of the most important medieval cities of Europe....
, the Royal Assembly of the empire, and its annalists could therefore rely on genuine information from the royal house and obtain eyewitness accounts. The city lost some stature under the rule of Henry II
Henry II, Holy Roman Emperor
Henry II , also referred to as Saint Henry, Obl.S.B., was the fifth and last Holy Roman Emperor of the Ottonian dynasty, from his coronation in Rome in 1014 until his death a decade later. He was crowned King of the Germans in 1002 and King of Italy in 1004...
, who broke with the tradition of celebrating Easter there; the Annals portray him unfavorably, and demonstrate the extent to which a royal monastery was entitled to criticize its monarch.

The Annals open with a chronicle of world history from the time of Adam
Adam
Adam is a figure in the Book of Genesis. According to the creation myth of Abrahamic religions, he is the first human. In the Genesis creation narratives, he was created by Yahweh-Elohim , and the first woman, Eve was formed from his rib...
to the Third Council of Constantinople
Third Council of Constantinople
The Third Council of Constantinople, counted as the Sixth Ecumenical Council by the Roman Catholic and Eastern Orthodox churches and other Christian groups, met in 680/681 and condemned monoenergism and monothelitism as heretical and defined Jesus Christ as having two energies and two wills...
in 680-681, based on chronicles by Jerome, Isidore, and Bede. The narrative is largely borrowed from multiple older sources until the year 1002, although original reports from as early as 852 are present. Beginning in 993, the narrative begins including events which represent the annalist's own eyewitness testimony concerning events at and around Quedlinburg. The amount of detail increases significantly from 1008 onwards, leading some analysts to conclude that 1008 was the actual date that the Annals were first compiled, although Robert Holzman argues for a start date of 1000. It has been suggested that the annalist temporarily abandoned the project between 1016 and 1021. The exact reasons for this suspension of the work are unknown. Work on the project continued between 1021 and 1030, when its authors were able to report a military victory against Mieszko II.

The primary task of the annalists was to record the heritage of the Ottonian dynasty and of Quedlinburg itself. The Annals incorporate the stories of a number of historic and legendary figures such as Attila the Hun
Attila the Hun
Attila , more frequently referred to as Attila the Hun, was the ruler of the Huns from 434 until his death in 453. He was leader of the Hunnic Empire, which stretched from the Ural River to the Rhine River and from the Danube River to the Baltic Sea. During his reign he was one of the most feared...
, King Dietrich of the Goths, and others. The historian Felice Lifshitz has suggested that amount of saga material integrated into its narrative is without parallel.

The Annals of Quedlinburg became an important research source; during the 12th century they were used at least by five contemporary historians. Felice Lifshitz asserts that the Annals of Quedlinburg played a key role in shaping the ways in which influential Germans
Germany
Germany , officially the Federal Republic of Germany , is a federal parliamentary republic in Europe. The country consists of 16 states while the capital and largest city is Berlin. Germany covers an area of 357,021 km2 and has a largely temperate seasonal climate...
of the nineteenth and twentieth centuries saw their medieval past. They continue to be analyzed in other contexts: by scholars of Beowulf
Beowulf
Beowulf , but modern scholars agree in naming it after the hero whose life is its subject." of an Old English heroic epic poem consisting of 3182 alliterative long lines, set in Scandinavia, commonly cited as one of the most important works of Anglo-Saxon literature.It survives in a single...
discussing its use of the term Hugones to mean Franks
Franks
The Franks were a confederation of Germanic tribes first attested in the third century AD as living north and east of the Lower Rhine River. From the third to fifth centuries some Franks raided Roman territory while other Franks joined the Roman troops in Gaul. Only the Salian Franks formed a...
, by climatologists
Climate change
Climate change is a significant and lasting change in the statistical distribution of weather patterns over periods ranging from decades to millions of years. It may be a change in average weather conditions or the distribution of events around that average...
, and in a book discussing fear of the millennium
Millennium (disambiguation)
A millennium is a period of 1,000 years.Millennium may also refer to:- Religion :* Millennialism, describing the 1000-year reign of Christ...
.

The first written occurrence of Lithuania
Lithuania
Lithuania , officially the Republic of Lithuania is a country in Northern Europe, the biggest of the three Baltic states. It is situated along the southeastern shore of the Baltic Sea, whereby to the west lie Sweden and Denmark...
's name
Name of Lithuania
The first known record of the name of Lithuania is in a 9 March 1009 story of Saint Bruno recorded in the Quedlinburg Chronicle . The Chronicle recorded a Latinized Slavic form of the name Lietuva: Litua pronounced [litvā]...
has been traced to the Quedlinburg Annals and dated to 9 March 1009. The passage reads:
From other sources that describe Bruno of Querfurt, it is clear that this missionary attempted to Christianize the pagan king Netimer and his subjects. However, Netimer's brother, refusing to accept Christianity, killed Bruno and his followers. The historian Alfredas Bumblauskas
Alfredas Bumblauskas
Alfredas Bumblauskas is a professor at Vilnius University and one of the best known Lithuanian historians.After graduating from Žemaitė school in Telšiai, he enrolled in Vilnius University in 1974. Bumblauskas received his doctoral degree in 1987, and was mentored by Edvardas Gudavičius...
has suggested that the story records the first baptismal attempt
Christianization of Lithuania
The Christianization of Lithuania – Christianization of the Grand Duchy of Lithuania that took place in 1387, initiated by the King of Poland and Grand Duke of Lithuania Jogaila and his cousin Vytautas, that signified the official adoption of Christianity by Lithuanians, one of the last pagan...
in the history of Lithuania
History of Lithuania
The history of Lithuania dates back to at least 1009, the first recorded written use of the term. Lithuanians, a branch of the Baltic peoples, later conquered neighboring lands, establishing the Grand Duchy of Lithuania and in the 13th century the short-lived Kingdom of Lithuania. The Grand Duchy...
.
The source of this article is wikipedia, the free encyclopedia.  The text of this article is licensed under the GFDL.