Encyclopedia
Anna Alexandrovna Vyrubova, née Taneyeva (16 July 1884 in Moscow
Moscow
Moscow is the capital, the most populous city, and the most populous federal subject of Russia. The city is a major political, economic, cultural, scientific, religious, financial, educational, and transportation centre of Russia and the continent...
— 20 July 1964, Helsinki
Helsinki
Helsinki is the capital and largest city in Finland. It is in the region of Uusimaa, located in southern Finland, on the shore of the Gulf of Finland, an arm of the Baltic Sea. The population of the city of Helsinki is , making it by far the most populous municipality in Finland. Helsinki is...
), was a lady-in-waiting
Lady-in-waiting
A lady-in-waiting is a female personal assistant at a royal court, attending on a queen, a princess, or a high-ranking noblewoman. Historically, in Europe a lady-in-waiting was often a noblewoman from a family highly thought of in good society, but was of lower rank than the woman on whom she...
, best friend and confidante to Tsaritsa
Tsaritsa
Tsaritsa , formerly spelled czaritsa , is the title of a female autocratic ruler of Bulgaria or Russia, or the title of a tsar's wife....
Alexandra Fyodorovna.

Vyrubova was the daughter of Aleksandr Taneyev, Chief Steward to His Majesty's Chancellery and a noted composer. Her mother, Nadezhda née Tolstoy
Tolstoy
Tolstoy, or Tolstoi is a prominent family of Russian nobility, descending from Andrey Kharitonovich Tolstoy who served under Vasily II of Moscow...
, descended from Field Marshal Mikhail Kutuzov. Due to these connections she was attached to the imperial court at an early age. She had two younger siblings, Sergei, and Alexandra.

She was a childhood playmate of Felix Yussupov, the man who spearheaded the murder of Grigori Rasputin
Grigori Rasputin
Grigori Yefimovich Rasputin was a Russian Orthodox Christian and mystic who is perceived as having influenced the latter days of the Russian Emperor Nicholas II, his wife Alexandra, and their only son Alexei...
. Yussupov found her unattractive: 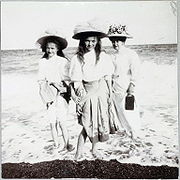 The Tsarina valued Anna's devotion to her and befriended her, ignoring women of more distinction at the court. Anna married Alexander Vasilievich Vyrubov, a naval officer, even though she was warned by Rasputin that the marriage would be an unhappy one. The couple eventually divorced. Her mother reportedly told interrogators following the Russian Revolution that Vyrubov "proved to be completely impotent, with an extremely perverse sexual psychology that manifested itself in various sadistic episodes in which he inflicted moral suffering on her and evoked a feeling of utter disgust." Although her memoirs testify to the contrary, she is often credited with the introduction of Rasputin to the family of Tsar
Tsar
Tsar is a title used to designate certain European Slavic monarchs or supreme rulers. As a system of government in the Tsardom of Russia and Russian Empire, it is known as Tsarist autocracy, or Tsarism...
Nicholas II
Nicholas II of Russia
Nicholas II was the last Emperor of Russia, Grand Prince of Finland, and titular King of Poland. His official short title was Nicholas II, Emperor and Autocrat of All the Russias and he is known as Saint Nicholas the Passion-Bearer by the Russian Orthodox Church.Nicholas II ruled from 1894 until...
. For a long time she served as a go-between for the Imperial family and Rasputin.

During World War I she trained as a Red Cross nurse and nursed soldiers along with the Tsarina and the Tsarina's two older daughters, The Grand Duchesses Olga
Grand Duchess Olga Nikolaevna of Russia
Grand Duchess Olga Nikolaevna of Russia ; , November 16 after 1900 – July 17, 1918) was the eldest daughter of the last autocratic ruler of the Russian Empire, Emperor Nicholas II, and of Empress Alexandra of Russia....
and Tatiana
Grand Duchess Tatiana Nikolaevna of Russia
Grand Duchess Tatiana Nikolaevna of Russia , , was the second daughter of Tsar Nicholas II, the last monarch of Russia, and of Tsarina Alexandra...
. She was severely injured in a train accident in January 1915; the convalescent Vyrubova found herself a paraplegic, but credited Rasputin with saving her life with his prayers. Following the Russian Revolution, Anna Vyrubova underwent a medical examination to prove her virginity
Virginity
Virginity refers to the state of a person who has never engaged in sexual intercourse. There are cultural and religious traditions which place special value and significance on this state, especially in the case of unmarried females, associated with notions of personal purity, honor and worth...
. The provincial investigator concluded that she was too naive and unintelligent to have had any influence over the Tsarina. Vyrubova escaped the Bolshevik revolution by fleeing to Finland
Finland
Finland , officially the Republic of Finland, is a Nordic country situated in the Fennoscandian region of Northern Europe. It is bordered by Sweden in the west, Norway in the north and Russia in the east, while Estonia lies to its south across the Gulf of Finland.Around 5.4 million people reside...
. 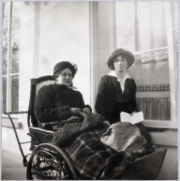 In Anna's own memoirs, she describes her perils in prison and her narrow escape from execution when, miraculously, she met several old friends of her father's on a St. Petersburg street who helped her escape her captor. She endured much hardship avoiding the Bolsheviks, and was only able to escape to Finland in December 1920.