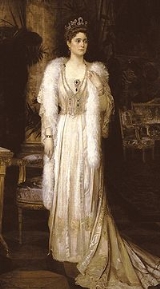 Encyclopedia
Tsaritsa formerly spelled czaritsa (and in English
English language
English is a West Germanic language that arose in the Anglo-Saxon kingdoms of England and spread into what was to become south-east Scotland under the influence of the Anglian medieval kingdom of Northumbria...
usually tsarina or czarina, with a feminine suffix), is the title of a female autocratic
Autocracy
An autocracy is a form of government in which one person is the supreme power within the state. It is derived from the Greek : and , and may be translated as "one who rules by himself". It is distinct from oligarchy and democracy...
ruler (monarch
Monarch
A monarch is the person who heads a monarchy. This is a form of government in which a state or polity is ruled or controlled by an individual who typically inherits the throne by birth and occasionally rules for life or until abdication...
) of Bulgaria
Bulgaria
Bulgaria , officially the Republic of Bulgaria , is a parliamentary democracy within a unitary constitutional republic in Southeast Europe. The country borders Romania to the north, Serbia and Macedonia to the west, Greece and Turkey to the south, as well as the Black Sea to the east...
or Russia
Russia
Russia or , officially known as both Russia and the Russian Federation , is a country in northern Eurasia. It is a federal semi-presidential republic, comprising 83 federal subjects...
, or the title of a tsar's
Tsar
Tsar is a title used to designate certain European Slavic monarchs or supreme rulers. As a system of government in the Tsardom of Russia and Russian Empire, it is known as Tsarist autocracy, or Tsarism...
wife.

"Tsaritsa" was the title of the female supreme ruler in the following states:

Since 1721, the official titles of the Russian male and female monarchs were Emperor
Emperor
An emperor is a monarch, usually the sovereign ruler of an empire or another type of imperial realm. Empress, the female equivalent, may indicate an emperor's wife or a woman who rules in her own right...
and Empress , respectively, or Empress Consort. Officially the last Russian tsaritsa was Eudoxia Lopukhina
Eudoxia Lopukhina
Tsarina Evdokiya Feodorovna Lopukhina was the first wife of Peter I of Russia. They married in 1689 but divorced in 1698...
, Peter the Great's first wife, and the last Russian Empress was Alexandra Fyodorovna (Alix of Hesse), the wife of Nicholas II of Russia
Nicholas II of Russia
Nicholas II was the last Emperor of Russia, Grand Prince of Finland, and titular King of Poland. His official short title was Nicholas II, Emperor and Autocrat of All the Russias and he is known as Saint Nicholas the Passion-Bearer by the Russian Orthodox Church.Nicholas II ruled from 1894 until...
.

Several tsaritsas were the rulers of Russia, including empresses Catherine I
Catherine I of Russia
Catherine I , the second wife of Peter the Great, reigned as Empress of Russia from 1725 until her death.-Life as a peasant woman:The life of Catherine I was said by Voltaire to be nearly as extraordinary as that of Peter the Great himself. There are no documents that confirm her origins. Born on...
(reigned 1725–27), Anna
Anna of Russia
Anna of Russia or Anna Ivanovna reigned as Duchess of Courland from 1711 to 1730 and as Empress of Russia from 1730 to 1740.-Accession to the throne:Anna was the daughter of Ivan V of Russia, as well as the niece of Peter the Great...
(1730–40), Elizabeth (1741–62), and Catherine the Great
Catherine II of Russia
Catherine II, also known as Catherine the Great , Empress of Russia, was born in Stettin, Pomerania, Prussia on as Sophie Friederike Auguste von Anhalt-Zerbst-Dornburg...
(1762–96). Others who gained the title unofficially by marrying a tsar were Elizabeth Alexeevna, Alexandra Fyodorovna (Charlotte of Prussia), Maria Alexandrovna, Maria Fyodorovna, and Eleonore of Reuss-Köstritz, who became Tsaritsa of Bulgaria following her marriage to Tsar Ferdinand
Ferdinand I of Bulgaria
Ferdinand , born Ferdinand Maximilian Karl Leopold Maria of Saxe-Coburg and Gotha-Koháry, was the ruler of Bulgaria from 1887 to 1918, first as knyaz and later as tsar...
. 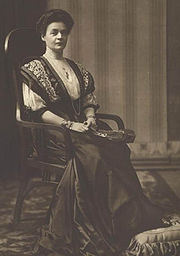