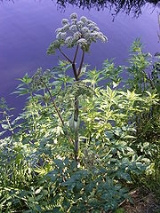 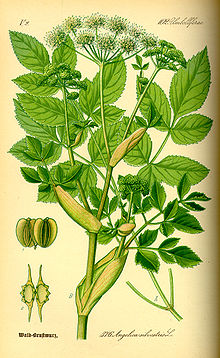 Angelica is a genus of about 60 species of tall biennial and perennial herb
Herb
Except in botanical usage, an herb is "any plant with leaves, seeds, or flowers used for flavoring, food, medicine, or perfume" or "a part of such a plant as used in cooking"...
s in the family Apiaceae
Apiaceae
The Apiaceae , commonly known as carrot or parsley family, is a group of mostly aromatic plants with hollow stems. The family is large, with more than 3,700 species spread across 434 genera, it is the sixteenth largest family of flowering plants...
, native to temperate and subarctic regions of the Northern Hemisphere
Northern Hemisphere
The Northern Hemisphere is the half of a planet that is north of its equator—the word hemisphere literally means “half sphere”. It is also that half of the celestial sphere north of the celestial equator...
, reaching as far North as Iceland
Iceland
Iceland , described as the Republic of Iceland, is a Nordic and European island country in the North Atlantic Ocean, on the Mid-Atlantic Ridge. Iceland also refers to the main island of the country, which contains almost all the population and almost all the land area. The country has a population...
and Lapland. They grow to 1-3 m tall, with large bipinnate leaves
Leaf
A leaf is an organ of a vascular plant, as defined in botanical terms, and in particular in plant morphology. Foliage is a mass noun that refers to leaves as a feature of plants....
and large compound umbels of white or greenish-white flower
Flower
A flower, sometimes known as a bloom or blossom, is the reproductive structure found in flowering plants . The biological function of a flower is to effect reproduction, usually by providing a mechanism for the union of sperm with eggs...
s.

Some species can be found in purple moor and rush pastures.

Some species are grown as flavor
Flavor
Flavor or flavour is the sensory impression of a food or other substance, and is determined mainly by the chemical senses of taste and smell. The "trigeminal senses", which detect chemical irritants in the mouth and throat as well as temperature and texture, are also very important to the overall...
ing agents or for their medicinal properties. The most notable of these is garden angelica
Garden Angelica
Angelica archangelica, commonly known as Garden Angelica, Holy Ghost, Wild Celery, and Norwegian angelica, is a biennial plant from the Apiaceae family Apiaceae family, formerly known as Umbelleferae...
(A. archangelica), which is commonly known simply as angelica. Natives of Lapland use the fleshy roots as food and the stalks as medicine. Crystallized strips of young angelica stems and midribs are green in colour and are sold as decorative and flavoursome cake decoration material, but may also be enjoyed on their own. The roots and seeds are sometimes used to flavor gin
Gin
Gin is a spirit which derives its predominant flavour from juniper berries . Although several different styles of gin have existed since its origins, it is broadly differentiated into two basic legal categories...
. Its presence accounts for the distinct flavor of many liqueurs, such as Chartreuse
Chartreuse (liqueur)
Chartreuse is a French liqueur made by the Carthusian Monks since the 1740s. It is composed of distilled alcohol aged with 130 herbal extracts. The liqueur is named after the Monks' Grande Chartreuse monastery, located in the Chartreuse Mountains in the general region of Grenoble in France...
.

Among the Sami people
Sami people
The Sami people, also spelled Sámi, or Saami, are the arctic indigenous people inhabiting Sápmi, which today encompasses parts of far northern Sweden, Norway, Finland, the Kola Peninsula of Russia, and the border area between south and middle Sweden and Norway. The Sámi are Europe’s northernmost...
of Lappland
Lappland
Lappland can refer to:*Lapland, geographic region in Northern Fennoscandia* Lappland, Sweden* Lapland, FinlandUnlike the English word "Lapland", the Swedish word is not used to indicate the area specifically inhabited by the Sami people. An old Swedish word for the Sami area under Swedish control...
, the plant is used to make a traditional musical instrument the fadno
Fadno
The fadno is a reed instrument of the Sami people of Scandinavia. The instrument features a reed and three to six fingerholes, and appears to have no parallels among the surrounding Scandinavian peoples....
.

Seacoast angelica
Angelica lucida
Angelica lucida is a species of angelica known by the common names seacoast angelica and sea-watch. It is also one of many species in the celery family which are casually called wild celery. This plant is generally similar in appearance to other angelicas, with tall, dense umbels of yellowish-white...
(A. lucida) has been eaten as a wild version of celery
Celery
Apium graveolens is a plant species in the family Apiaceae commonly known as celery or celeriac , depending on whether the petioles or roots are eaten: celery refers to the former and celeriac to the latter. Apium graveolens grows to 1 m tall...
.

In parts of Japan, especially the Izu Islands
Izu Islands
The are a group of volcanic islands stretching south and east from the Izu Peninsula of Honshū, Japan. Administratively, they form two towns and six villages; all part of Tokyo. The largest is Izu Ōshima, usually called simply Ōshima....
, the shoots and leaves of ashitaba
Ashitaba
Angelica keiskei, more widely known under the japanese name of is a not frost tender perennial plant from the angelica genus endemic to Hachijōjima. Its japanese nomenclature stems from the above-average regenerative capabilities the plant exhibits when getting injured...
(A. keiskei) are eaten as tempura
Tempura
], is a Japanese dish of seafood or vegetables that have been battered and deep fried.-Batter:A light batter is made of cold water and soft wheat flour . Eggs, baking soda or baking powder, starch, oil, and/or spices may also be added...
, particularly in the spring.

A. dawsonii was used by several first nations in North America for ritual purposes.

A. atropurpurea is found in North America from Newfoundland west to Wisconsin
Wisconsin
Wisconsin is a U.S. state located in the north-central United States and is part of the Midwest. It is bordered by Minnesota to the west, Iowa to the southwest, Illinois to the south, Lake Michigan to the east, Michigan to the northeast, and Lake Superior to the north. Wisconsin's capital is...
and south to Maryland
Maryland
Maryland is a U.S. state located in the Mid Atlantic region of the United States, bordering Virginia, West Virginia, and the District of Columbia to its south and west; Pennsylvania to its north; and Delaware to its east...
, and was smoked by Missouri tribes for colds and respiratory ailments. This species is very similar in appearance to the poisonous water hemlock
Cicuta
Cicuta, commonly known as water hemlock, is a small genus of four species of highly poisonous plants in the family Apiaceae. They are perennial herbaceous plants which grow up to tall, having distinctive small green or white flowers arranged in an umbrella shape . Plants in this genus may also be...
.

The boiled roots of angelica were applied internally and externally to wounds by the Aleut people in Alaska to speed healing.

Candied angelica is a popular cake decoration and flavouring.

The herb, also known by the Chinese name, Bai Zhi, and latin name, Radix Angelicae Dahurica, is used medicinally in Traditional Chinese Medicine
Traditional Chinese medicine
Traditional Chinese Medicine refers to a broad range of medicine practices sharing common theoretical concepts which have been developed in China and are based on a tradition of more than 2,000 years, including various forms of herbal medicine, acupuncture, massage , exercise , and dietary therapy...
. According to a study, Methoxy-8-(2-hydroxy-3-buthoxy-3-methylbutyloxy)-psoralen has been shown to regulate the cyclooxygenase-2 (COX-2)-dependent phase of prostaglandin D(2) generation in bone marrow-derived mast cells (IC50, 23.5 mM). In addition, this compound consistently modulated the production of leukotriene C(4), demonstrating the ability to modulate both cyclooxygenase-2 and 5-lipoxygenase activity. Furthermore, this compound also affected the degranulation reaction (IC50, 4.1 mM).