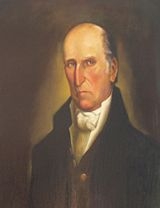 Encyclopedia
Andrew Pickens was a militia
Militia (United States)
The role of militia, also known as military service and duty, in the United States is complex and has transformed over time.Spitzer, Robert J.: The Politics of Gun Control, Page 36. Chatham House Publishers, Inc., 1995. " The term militia can be used to describe any number of groups within the...
leader in the American Revolution
American Revolutionary War
The American Revolutionary War , the American War of Independence, or simply the Revolutionary War, began as a war between the Kingdom of Great Britain and thirteen British colonies in North America, and ended in a global war between several European great powers.The war was the result of the...
and a member of the United States House of Representatives
United States House of Representatives
The United States House of Representatives is one of the two Houses of the United States Congress, the bicameral legislature which also includes the Senate.The composition and powers of the House are established in Article One of the Constitution...
from South Carolina
South Carolina
South Carolina is a state in the Deep South of the United States that borders Georgia to the south, North Carolina to the north, and the Atlantic Ocean to the east. Originally part of the Province of Carolina, the Province of South Carolina was one of the 13 colonies that declared independence...
.

Pickens was born in Bucks County, Pennsylvania
Bucks County, Pennsylvania
- Industry and commerce :The boroughs of Bristol and Morrisville were prominent industrial centers along the Northeast Corridor during World War II. Suburban development accelerated in Lower Bucks in the 1950s with the opening of Levittown, Pennsylvania, the second such "Levittown" designed by...
, the son of Scots-Irish
Scots-Irish American
Scotch-Irish Americans are an estimated 250,000 Presbyterian and other Protestant dissenters from the Irish province of Ulster who immigrated to North America primarily during the colonial era and their descendants. Some scholars also include the 150,000 Ulster Protestants who immigrated to...
immigrants, Andrew Pickens, Sr. and Anne (née Davis). His paternal great-grandparents were Robert Andrew Pickens (Robert André Picon) and Esther-Jeanne, widow Bonneau, of South Carolina and La Rochelle, France.

He established the Hopewell Plantation on the Seneca River, at which several treaties with Native Americans
Native Americans in the United States
Native Americans in the United States are the indigenous peoples in North America within the boundaries of the present-day continental United States, parts of Alaska, and the island state of Hawaii. They are composed of numerous, distinct tribes, states, and ethnic groups, many of which survive as...
were held, each called the Treaty of Hopewell
Treaty of Hopewell
The Treaty of Hopewell is any of three different treaties signed at Hopewell Plantation. The plantation was owned by Andrew Pickens, and was located on the Seneca River in northwestern South Carolina. The treaties were signed between the Confederation Congress of the United States of America and...
. Just across the river was the Cherokee town of Isunigu ("Seneca"). 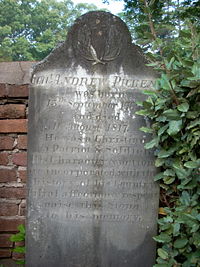 Pickens was captured at the Siege of Charleston
Siege of Charleston
The Siege of Charleston was one of the major battles which took place towards the end of the American Revolutionary War, after the British began to shift their strategic focus towards the American Southern Colonies. After about six weeks of siege, Continental Army Major General Benjamin Lincoln...
in 1780.
He saw action at the Battle of Cowpens
Battle of Cowpens
The Battle of Cowpens was a decisive victory by Patriot Revolutionary forces under Brigadier General Daniel Morgan, in the Southern campaign of the American Revolutionary War...
, Siege of Augusta
Siege of Augusta
The Siege of Augusta began on May 22, 1781 and was conducted by General Andrew Pickens and Colonel Henry "Light Horse Harry" Lee against British troops occupying the town of Augusta, Georgia. Fort Cornwallis, the primary defenses, were successfully exposed to cannon fire by the construction of a...
, Siege of Ninety Six, and the Battle of Eutaw Springs
Battle of Eutaw Springs
The Battle of Eutaw Springs was a battle of the American Revolutionary War, and was the last major engagement of the war in the Carolinas.-Background:...
.

Pickens also led a campaign in north Georgia against the Cherokee Indians late in the war. His victorious campaign led to the Cherokees ceding
Cession
The act of Cession, or to cede, is the assignment of property to another entity. In international law it commonly refers to land transferred by treaty...
significant portions of land between the Savannah
Savannah River
The Savannah River is a major river in the southeastern United States, forming most of the border between the states of South Carolina and Georgia. Two tributaries of the Savannah, the Tugaloo River and the Chattooga River, form the northernmost part of the border...
and Chattachoochee
Chattahoochee River
The Chattahoochee River flows through or along the borders of the U.S. states of Georgia, Alabama, and Florida. It is a tributary of the Apalachicola River, a relatively short river formed by the confluence of the Chattahoochee and Flint Rivers and emptying into Apalachicola Bay in the Gulf of...
rivers in the Long Swamp Treaty signed in what is currently Pickens County, Georgia
Pickens County, Georgia
Pickens County is a county located in the U.S. state of Georgia. The 2000 Census showed a population of 22,983. The 2007 Census Estimate showed a population of 30,488...
. Pickens was well regarded by Native Americans that he dealt with and was given the name Skyagunsta, "The Wizard Owl."

He and three hundred of his men went home to sit out the war on parole.

Pickens' parole did not last, however. After Tory raiders destroyed most of his property and frightened his family, he informed the British that they had violated the terms of parole and rejoined the war. Ironically, Sumter also resumed fighting under similar circumstances. Pickens was soon operating in the Ninety Six District. During this period of the war, Pickens would join Francis Marion
Francis Marion
Francis Marion was a military officer who served in the American Revolutionary War. Acting with Continental Army and South Carolina militia commissions, he was a persistent adversary of the British in their occupation of South Carolina in 1780 and 1781, even after the Continental Army was driven...
and Thomas Sumter
Thomas Sumter
Thomas Sumter nicknamed the "Carolina Gamecock" , was a hero of the American Revolution and went on to become a longtime member of the Congress of the United States.-Early life:Thomas Sumter was born near Charlottesville in Hanover County, Virginia in 1734...
as the most well-known partisan leaders in the Carolinas.

At the Battle of Cowpens, Brig. General Daniel Morgan gave Pickens command of the militia, which played a key role in the battle. On the evening of January 16, Morgan personally instructed the militia to hold its ground while firing two rounds and then retreat. On the morning of January 17, Pickens and the militia carried out the plan perfectly, which led Lt. Colonel Banastre Tarleton and British to believe that the militia was fleeing. The British blindly charged ahead and were drawn into a double flanking and soundly defeated. Following Cowpens, South Carolina Governor John Rutledge promoted Pickens to brigadier general. He would also be awarded a sword by Congress.

Pickens' militia was soon recalled to defend their own homes and so he missed the Battle of Guilford Courthouse on March 15, 1781. In April, he raised a regiments of state regulars. In May 1781, Maj. General Nathanael Greene sent Pickens and Lt. Colonel Henry Lee to support Elijah Clarke in operations against Augusta, Georgia. The siege began on May 22 and after maneuvering, securing outposts and the cutting off of reinforcements by the Patriots, Colonel Thomas Brown surrendered Augusta on June 5, 1781.

Following the surrender of Augusta, Pickens and Lt. Colonel Lee joined General Greene in his siege at Ninety Six, South Carolina. Greene had begun his siege on May 22, 1781, the same day that Augusta had been besieged. On June 11, Greene ordered Pickens and Lt. Colonel William Washington to aid Thomas Sumter in blocking a relief column led by Lord Rawdon. However, Sumter instead moved to Fort Granby, allowing Rawdon to make his way to Ninety Six. On June 19, Greene had to give up the siege and retreat after a failed assault. 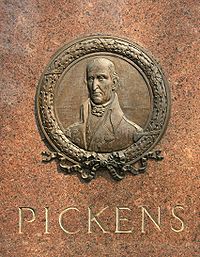 He married Rebecca Floride Calhoun in 1765. They had 12 children, including Andrew Pickens
Andrew Pickens (governor)
Andrew Pickens, Jr. was an American military and political leader who served as the 46th Governor of South Carolina from 1816 until 1818.-Biography:...
who later became governor of South Carolina
South Carolina
South Carolina is a state in the Deep South of the United States that borders Georgia to the south, North Carolina to the north, and the Atlantic Ocean to the east. Originally part of the Province of Carolina, the Province of South Carolina was one of the 13 colonies that declared independence...
. He was also an uncle of Floride Calhoun
Floride Calhoun
Floride Bonneau Calhoun was the wife of prominent U.S. politician John C. Calhoun.-Background and early life:...
, the wife of John C. Calhoun
John C. Calhoun
John Caldwell Calhoun was a leading politician and political theorist from South Carolina during the first half of the 19th century. Calhoun eloquently spoke out on every issue of his day, but often changed positions. Calhoun began his political career as a nationalist, modernizer, and proponent...
.

Fort Pickens
Fort Pickens
Fort Pickens is a pentagonal historic United States military fort on Santa Rosa Island in the Pensacola, Florida, area. It is named after American Revolutionary War hero Andrew Pickens. The fort was completed in 1834 and remained in use until 1947...
in Florida
Florida
Florida is a state in the southeastern United States, located on the nation's Atlantic and Gulf coasts. It is bordered to the west by the Gulf of Mexico, to the north by Alabama and Georgia and to the east by the Atlantic Ocean. With a population of 18,801,310 as measured by the 2010 census, it...
is named in his honor as is Pickens County, Alabama
Pickens County, Alabama
Pickens County is a county of the U.S. state of Alabama. As of 2010, the population was 19,746. Its county seat is Carrollton, and it is a prohibition, or dry county.-History:...
; Pickens County, Georgia
Pickens County, Georgia
Pickens County is a county located in the U.S. state of Georgia. The 2000 Census showed a population of 22,983. The 2007 Census Estimate showed a population of 30,488...
; and Pickens
Pickens, South Carolina
Pickens, formerly called Pickens Courthouse, is a city in Pickens County, South Carolina, United States. The population was 3,012 at the 2000 census, at which time it was listed as a town; the change to a city was made in 1998, but not reported to the Census Bureau until 2001. It is the county seat...
and Pickens County in his adopted home state of South Carolina.

Pickens was a 7th great grandfather of former Senator and 2004 presidential candidate John Edwards
John Edwards
Johnny Reid "John" Edwards is an American politician, who served as a U.S. Senator from North Carolina. He was the Democratic nominee for Vice President in 2004, and was a candidate for the Democratic presidential nomination in 2004 and 2008.He defeated incumbent Republican Lauch Faircloth in...
.

Pickens and his actions served as one of the sources for the fictional character of Benjamin Martin in The Patriot
The Patriot (2000 film)
The Patriot is a 2000 historical war film directed by Roland Emmerich, written by Robert Rodat, and starring Mel Gibson, Chris Cooper, and Heath Ledger. It was produced by the Mutual Film Company and Centropolis Entertainment and was distributed by Columbia Pictures...
, a motion picture released in 2000.