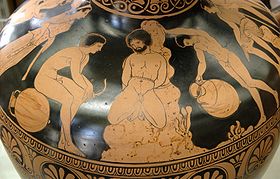 In Greek mythology
Greek mythology
Greek mythology is the body of myths and legends belonging to the ancient Greeks, concerning their gods and heroes, the nature of the world, and the origins and significance of their own cult and ritual practices. They were a part of religion in ancient Greece...
, Amycus (Ἄμυκος) was the son of Poseidon
Poseidon
Poseidon was the god of the sea, and, as "Earth-Shaker," of the earthquakes in Greek mythology. The name of the sea-god Nethuns in Etruscan was adopted in Latin for Neptune in Roman mythology: both were sea gods analogous to Poseidon...
and Melia
Melia
-People:* Melia Watras , a prominent American violist* Elie Melia , a Georgian Orthodox priest and church historian* Fulvio Melia , an Italian-American physicist* Jimmy Melia , a former English footballer...
. He was a boxer and King of the Bebryces
Bebryces
The Bebryces were a tribe of people who lived in Bithynia. According to Strabo they were one of the many Thracian tribes that had crossed from Europe into Asia....
, a mythical people in Bithynia
Bithynia
Bithynia was an ancient region, kingdom and Roman province in the northwest of Asia Minor, adjoining the Propontis, the Thracian Bosporus and the Euxine .-Description:...
. Polydeuces
Polydeuces
Polydeuces may refer to:*Polydeuces , a moon of Saturn*An alternative name for the Greek mythological hero Pollux...
beat him in a boxing match when the Argonauts
Argonauts
The Argonauts ) were a band of heroes in Greek mythology who, in the years before the Trojan War, accompanied Jason to Colchis in his quest to find the Golden Fleece. Their name comes from their ship, the Argo, which was named after its builder, Argus. "Argonauts", therefore, literally means...
passed through Bithynia. He was also a prominent Trojan
Troy
Troy was a city, both factual and legendary, located in northwest Anatolia in what is now Turkey, southeast of the Dardanelles and beside Mount Ida...
during the Trojan War
Trojan War
In Greek mythology, the Trojan War was waged against the city of Troy by the Achaeans after Paris of Troy took Helen from her husband Menelaus, the king of Sparta. The war is among the most important events in Greek mythology and was narrated in many works of Greek literature, including the Iliad...
. He married Theona
Theona
In Greek mythology, Theona was a daughter of Dymas, a sister of Hecuba and wife of Amycus. With him, she mothered Mimas....
and had one son named Mimas
Mimas (Aeneid)
Mimas is a Greek mythological character who appears in Virgil's Aeneid. He was the son of Amycus and Theona. A Trojan, he accompanied Aeneas to Italy, where he was killed by Mezentius....
. He followed Aeneas
Aeneas
Aeneas , in Greco-Roman mythology, was a Trojan hero, the son of the prince Anchises and the goddess Aphrodite. His father was the second cousin of King Priam of Troy, making Aeneas Priam's second cousin, once removed. The journey of Aeneas from Troy , which led to the founding a hamlet south of...
to Italy
Italy
Italy , officially the Italian Republic languages]] under the European Charter for Regional or Minority Languages. In each of these, Italy's official name is as follows:;;;;;;;;), is a unitary parliamentary republic in South-Central Europe. To the north it borders France, Switzerland, Austria and...
, where he was killed by Turnus
Turnus
In Virgil's Aeneid, Turnus was the King of the Rutuli, and the chief antagonist of the hero Aeneas.-Biography:Prior to Aeneas' arrival in Italy, Turnus was the primary potential suitor of Lavinia, daughter of Latinus, King of the Latin people. Upon Aeneas' arrival, however, Lavinia is promised to...
.