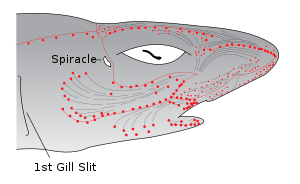 The ampullae of Lorenzini are special sensing organ
Organ (anatomy)
In biology, an organ is a collection of tissues joined in structural unit to serve a common function. Usually there is a main tissue and sporadic tissues . The main tissue is the one that is unique for the specific organ. For example, main tissue in the heart is the myocardium, while sporadic are...
s called electroreceptors, forming a network of jelly-filled pores. They are mostly discussed as being found in cartilaginous fishes (shark
Shark
Sharks are a type of fish with a full cartilaginous skeleton and a highly streamlined body. The earliest known sharks date from more than 420 million years ago....
s, rays
Batoidea
Batoidea is a superorder of cartilaginous fish commonly known as rays and skates, containing more than 500 described species in thirteen families...
, and chimaera
Chimaera
Chimaeras are cartilaginous fish in the order Chimaeriformes, known informally as ghost sharks, ratfish , spookfish , or rabbitfishes...
s); however, they are also reported to be found in Chondrostei
Chondrostei
Chondrostei are primarily cartilaginous fish showing some ossification. There are 52 species divided among two orders, the Acipenseriformes and the Polypteriformes ....
such as Reedfish
Reedfish
The Reedfish, Erpetoichthys calabaricus, Ropefish , or Snakefish is a species of freshwater fish in the bichir family and order. It is the only member of the genus Erpetoichthys...
and sturgeon
Sturgeon
Sturgeon is the common name used for some 26 species of fish in the family Acipenseridae, including the genera Acipenser, Huso, Scaphirhynchus and Pseudoscaphirhynchus. The term includes over 20 species commonly referred to as sturgeon and several closely related species that have distinct common...
. Lungfish
Lungfish
Lungfish are freshwater fish belonging to the Subclass Dipnoi. Lungfish are best known for retaining characteristics primitive within the Osteichthyes, including the ability to breathe air, and structures primitive within Sarcopterygii, including the presence of lobed fins with a well-developed...
have also been reported to have them. Teleosts have re-evolved a different type of electroreceptors.. They were first described by Stefano Lorenzini in 1678.

These sensory organs help fish to sense electric fields in the water. Each ampulla consists of a jelly-filled canal opening to the surface by a pore in the skin and ending blindly in a cluster of small pockets full of special jelly. The ampullae are mostly clustered into groups inside the body, each cluster having ampullae connecting with different parts of the skin, but preserving a left-right symmetry
Symmetry
Symmetry generally conveys two primary meanings. The first is an imprecise sense of harmonious or aesthetically pleasing proportionality and balance; such that it reflects beauty or perfection...
. The canal lengths vary from animal to animal, but the distribution of the pores is generally specific to each species. The ampullae pores are plainly visible as dark spots in the skin. They provide fish with a sixth sense
Sense
Senses are physiological capacities of organisms that provide inputs for perception. The senses and their operation, classification, and theory are overlapping topics studied by a variety of fields, most notably neuroscience, cognitive psychology , and philosophy of perception...
capable of detecting electromagnetic field
Electromagnetic field
An electromagnetic field is a physical field produced by moving electrically charged objects. It affects the behavior of charged objects in the vicinity of the field. The electromagnetic field extends indefinitely throughout space and describes the electromagnetic interaction...
s as well as temperature gradients.

The ampullae detect electric field
Electric field
In physics, an electric field surrounds electrically charged particles and time-varying magnetic fields. The electric field depicts the force exerted on other electrically charged objects by the electrically charged particle the field is surrounding...
s in the water
Water
Water is a chemical substance with the chemical formula H2O. A water molecule contains one oxygen and two hydrogen atoms connected by covalent bonds. Water is a liquid at ambient conditions, but it often co-exists on Earth with its solid state, ice, and gaseous state . Water also exists in a...
, or more precisely the difference between the volt
Volt
The volt is the SI derived unit for electric potential, electric potential difference, and electromotive force. The volt is named in honor of the Italian physicist Alessandro Volta , who invented the voltaic pile, possibly the first chemical battery.- Definition :A single volt is defined as the...
age at the skin pore and the voltage at the base of the electroreceptor cells. A positive pore stimulus would decrease the rate of nerve
Nerve
A peripheral nerve, or simply nerve, is an enclosed, cable-like bundle of peripheral axons . A nerve provides a common pathway for the electrochemical nerve impulses that are transmitted along each of the axons. Nerves are found only in the peripheral nervous system...
activity coming from the electroreceptor cells, and a negative pore stimulus would increase the rate of nerve activity coming from the electroreceptor cells.

Sharks may be more sensitive to electric fields than any other animal, with a threshold of sensitivity as low as 5 nV/cm. That is 5/1,000,000,000 of a volt measured in a centimeter-long ampulla. Since all living creatures produce an electrical field by muscle
Muscle
Muscle is a contractile tissue of animals and is derived from the mesodermal layer of embryonic germ cells. Muscle cells contain contractile filaments that move past each other and change the size of the cell. They are classified as skeletal, cardiac, or smooth muscles. Their function is to...
contractions, it is easy to imagine that a shark may pick up weak electrical stimuli from the muscle contractions of animals, particularly prey. On the other hand, the electrochemical fields generated by paralyzed prey were sufficient to elicit a feeding attack from sharks and rays in experimental tanks; therefore muscle contractions are not necessary to attract the animals. Sharks and rays can locate prey buried in the sand, or DC
Direct current
Direct current is the unidirectional flow of electric charge. Direct current is produced by such sources as batteries, thermocouples, solar cells, and commutator-type electric machines of the dynamo type. Direct current may flow in a conductor such as a wire, but can also flow through...
electric dipoles simulating the main feature of the electric field of a prey buried in the sand.

Early in the 20th century, the purpose of the ampullae was not clearly understood, and electrophysiological experiments suggested a sensibility to temperature
Temperature
Temperature is a physical property of matter that quantitatively expresses the common notions of hot and cold. Objects of low temperature are cold, while various degrees of higher temperatures are referred to as warm or hot...
, mechanical pressure and possibly salinity
Salinity
Salinity is the saltiness or dissolved salt content of a body of water. It is a general term used to describe the levels of different salts such as sodium chloride, magnesium and calcium sulfates, and bicarbonates...
. It was not until 1960 that the ampullae were clearly identified as specialized receptor organs for sensing electric field
Electric field
In physics, an electric field surrounds electrically charged particles and time-varying magnetic fields. The electric field depicts the force exerted on other electrically charged objects by the electrically charged particle the field is surrounding...
s.
The ampullae may also allow the shark to detect changes in water temperature. Each ampulla is a bundle of sensory cell
Sensory receptor
In a sensory system, a sensory receptor is a sensory nerve ending that responds to a stimulus in the internal or external environment of an organism...
s containing multiple nerve
Nerve
A peripheral nerve, or simply nerve, is an enclosed, cable-like bundle of peripheral axons . A nerve provides a common pathway for the electrochemical nerve impulses that are transmitted along each of the axons. Nerves are found only in the peripheral nervous system...
fibres. These fibres are enclosed in a gel-filled tubule
Tubule
A tubule is a very small tube or fistular structure.A system of surface-connected membranes in muscle that enables a nerve impulse to travel to the interior of the muscle fibre.In anatomy, a tubule is a minute tube lined with glandular epithelium....
which has a direct opening to the surface through a pore. The gel is a glycoprotein
Glycoprotein
Glycoproteins are proteins that contain oligosaccharide chains covalently attached to polypeptide side-chains. The carbohydrate is attached to the protein in a cotranslational or posttranslational modification. This process is known as glycosylation. In proteins that have segments extending...
based substance with the same resistivity as seawater
Seawater
Seawater is water from a sea or ocean. On average, seawater in the world's oceans has a salinity of about 3.5% . This means that every kilogram of seawater has approximately of dissolved salts . The average density of seawater at the ocean surface is 1.025 g/ml...
, and it has electrical properties similar to a semiconductor
Semiconductor
A semiconductor is a material with electrical conductivity due to electron flow intermediate in magnitude between that of a conductor and an insulator. This means a conductivity roughly in the range of 103 to 10−8 siemens per centimeter...
.
This has been suggested as a mechanism by which temperature changes are transduced
Signal transduction
Signal transduction occurs when an extracellular signaling molecule activates a cell surface receptor. In turn, this receptor alters intracellular molecules creating a response...
into an electrical signal that the shark may use to detect temperature gradients, although it is a subject of debate in the scientific literature.