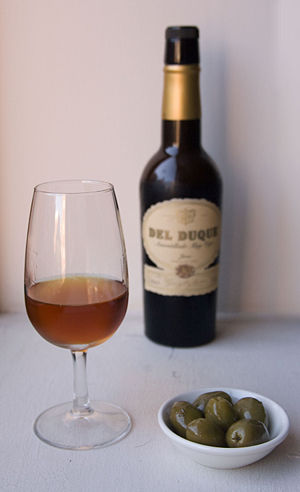 Amontillado is a variety of sherry
Sherry
Sherry is a fortified wine made from white grapes that are grown near the town of Jerez , Spain. In Spanish, it is called vino de Jerez....
, characterized by being darker than fino
Fino
Fino is the driest and palest of the traditional varieties of sherry. They are drunk comparatively young, and unlike the sweeter varieties should be drunk soon after the bottle is opened as exposure to air can cause them to lose their flavour within hours.-Flor:The defining component of Fino...
but lighter than oloroso
Oloroso
Oloroso is a variety of sherry produced by oxidative aging. It is normally darker than amontillado and has a higher glycerine content, which makes it smoother and less dry. Oloroso is usually dark and nutty....
. It is named for the Montilla
Montilla
Montilla a town and municipality of southern Spain, in the province of Córdoba, 32 miles south of the provincial capital, Córdoba, by the Córdoba-Bobadilla railway. , the town had a population of 23,245. The olive oil of the district is abundant and good, and it is the peculiar flavour of the pale...
region of Spain
Spain
Spain , officially the Kingdom of Spain languages]] under the European Charter for Regional or Minority Languages. In each of these, Spain's official name is as follows:;;;;;;), is a country and member state of the European Union located in southwestern Europe on the Iberian Peninsula...
, where the style originated in the 18th century, although the name 'amontillado' is sometimes used commercially as a simple measure of colour to label any sherry lying between a fino and an oloroso. An amontillado sherry begins as a fino, fortified to approximately 13.5 percent alcohol with a cap of flor
Flor
Flor is a winemaking term referring to a film of yeast on the surface of wine and which is important in the manufacture of certain styles of sherry. The flor is formed naturally under certain winemaking conditions, from indigenous yeasts found in the region of Andalucía in southern Spain...
yeast limiting its exposure to the air. A cask of fino is considered to be amontillado if the layer of flor fails to develop adequately, is intentionally killed by additional fortification or is allowed to die off through non-replenishment. Without the layer of flor, amontillado must be fortified to approximately 17.5 percent alcohol so that it does not oxidise too quickly. After the additional fortification, amontillado oxidises slowly, exposed to oxygen through the slightly porous American or Canadian oak casks, and gains a darker colour and richer flavour than fino.

Amontillado is usually served slightly chilled, and may be served either as an apéritif
Aperitif
Apéritifs and digestifs are alcoholic drinks that are normally served with meals.-Apéritifs:An apéritif is usually served before a meal to stimulate the appetite. This contrasts with digestifs, which are served after a meal for the purpose of aiding digestion...
, or as an accompaniment to food such as chicken or rabbit. Classically it was served with a fine, or thin, soup, like a beef consommé
Consommé
In cooking, a consommé is a type of clear soup made from richly flavored stock or bouillon that has been clarified usually through a fining process involving egg protein. It usually requires an advanced knowledge of cooking and past experience to create a high quality consommé...
.

Due to its oxidative aging and preparation, amontillado is more stable than fino and may be stored for a few years before opening. After opening, it can be kept for up to two weeks, if corked and refrigerated.

Amontillado is almost solely known outside of wine circles for its use in the title of Edgar Allan Poe
Edgar Allan Poe
Edgar Allan Poe was an American author, poet, editor and literary critic, considered part of the American Romantic Movement. Best known for his tales of mystery and the macabre, Poe was one of the earliest American practitioners of the short story and is considered the inventor of the detective...
's short story, "The Cask of Amontillado
The Cask of Amontillado
"The Cask of Amontillado" is a short story by Edgar Allan Poe, first published in the November 1846 issue of Godey's Lady's Book....
". It is also used in works such as Isak Dinesen
Karen Blixen
Baroness Karen von Blixen-Finecke , , née Karen Christenze Dinesen, was a Danish author also known by her pen name Isak Dinesen. She also wrote under the pen names Osceola and Pierre Andrézel...
's Babette's Feast
Babette's Feast
Babette's Feast is a 1987 Danish film directed by Gabriel Axel. The film's screenplay was written by Axel based on the story by Isak Dinesen , who also wrote the story which inspired the 1985 Academy Award winning film Out of Africa...
and Ben Bova's
Ben Bova
Benjamin William Bova is an American science-fiction author and editor. He is the recipient of six Hugo Awards for Best Professional Editor for his work at Analog Science Fiction in the 1970's.-Personal life:...
Grand Tour
Grand Tour (novel series)
-Summary:The novels present a theme of exploration and colonization of the solar system by humans in the late 21st century. Most of the books focus on the exploration of one particular planet or planetary moon....
novel series.

The 1987 film Babette's Feast
Babette's Feast
Babette's Feast is a 1987 Danish film directed by Gabriel Axel. The film's screenplay was written by Axel based on the story by Isak Dinesen , who also wrote the story which inspired the 1985 Academy Award winning film Out of Africa...
features a scene in which amontillado is served with turtle soup at the titular feast. The character of General Lorens Löwenhielm comments on the wonders of the drink poured for him. Episode 36 of Monty Python's Flying Circus
Monty Python's Flying Circus
Monty Python’s Flying Circus is a BBC TV sketch comedy series. The shows were composed of surreality, risqué or innuendo-laden humour, sight gags and observational sketches without punchlines...
features a vicar who is obsessed with sherry, and more specifically amontillado. It ends with a group of traditionally-dressed Spanish musicians singing a song praising amontillado. The main characters of the series Frasier
Frasier
Frasier is an American sitcom that was broadcast on NBC for eleven seasons, from September 16, 1993, to May 13, 2004. The program was created and produced by David Angell, Peter Casey, and David Lee in association with Grammnet and Paramount Network Television.A spin-off of Cheers, Frasier stars...
often drink sherry, and in the episode "Fathers and Sons", Frasier describes an Andalusian Amontillado.
The source of this article is wikipedia, the free encyclopedia.  The text of this article is licensed under the GFDL.