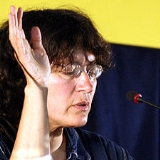 Encyclopedia
Amira Hass is a prominent left-wing
Left-wing politics
In politics, Left, left-wing and leftist generally refer to support for social change to create a more egalitarian society...
Israel
Israel
The State of Israel is a parliamentary republic located in the Middle East, along the eastern shore of the Mediterranean Sea...
i journalist
Journalist
A journalist collects and distributes news and other information. A journalist's work is referred to as journalism.A reporter is a type of journalist who researchs, writes, and reports on information to be presented in mass media, including print media , electronic media , and digital media A...
and author, mostly known for her columns in the daily newspaper Ha'aretz
Haaretz
Haaretz is Israel's oldest daily newspaper. It was founded in 1918 and is now published in both Hebrew and English in Berliner format. The English edition is published and sold together with the International Herald Tribune. Both Hebrew and English editions can be read on the Internet...
. She is particularly recognized for her reporting on Palestinian
Palestinian people
The Palestinian people, also referred to as Palestinians or Palestinian Arabs , are an Arabic-speaking people with origins in Palestine. Despite various wars and exoduses, roughly one third of the world's Palestinian population continues to reside in the area encompassing the West Bank, the Gaza...
affairs in the West Bank
West Bank
The West Bank ) of the Jordan River is the landlocked geographical eastern part of the Palestinian territories located in Western Asia. To the west, north, and south, the West Bank shares borders with the state of Israel. To the east, across the Jordan River, lies the Hashemite Kingdom of Jordan...
and Gaza
Gaza
Gaza , also referred to as Gaza City, is a Palestinian city in the Gaza Strip, with a population of about 450,000, making it the largest city in the Palestinian territories.Inhabited since at least the 15th century BC,...
, where she has also lived for a number of years.

The daughter of two Holocaust survivors, Hass is the only child of a Sarajevo
Sarajevo
Sarajevo |Bosnia]], surrounded by the Dinaric Alps and situated along the Miljacka River in the heart of Southeastern Europe and the Balkans....
-born Jewish mother, who survived nine months in the Bergen-Belsen concentration camp
Bergen-Belsen concentration camp
Bergen-Belsen was a Nazi concentration camp in Lower Saxony in northwestern Germany, southwest of the town of Bergen near Celle...
, and a Romania
Romania
Romania is a country located at the crossroads of Central and Southeastern Europe, on the Lower Danube, within and outside the Carpathian arch, bordering on the Black Sea...
n-born Jewish father. Hass was born in Jerusalem, and was educated at the Hebrew University of Jerusalem
Hebrew University of Jerusalem
The Hebrew University of Jerusalem ; ; abbreviated HUJI) is Israel's second-oldest university, after the Technion – Israel Institute of Technology. The Hebrew University has three campuses in Jerusalem and one in Rehovot. The world's largest Jewish studies library is located on its Edmond J...
, where she studied the history of Nazism
Nazism
Nazism, the common short form name of National Socialism was the ideology and practice of the Nazi Party and of Nazi Germany...
and the Europe
Europe
Europe is, by convention, one of the world's seven continents. Comprising the westernmost peninsula of Eurasia, Europe is generally 'divided' from Asia to its east by the watershed divides of the Ural and Caucasus Mountains, the Ural River, the Caspian and Black Seas, and the waterways connecting...
an Left's relation to the Holocaust. Early in her career, she traveled widely and worked in several different jobs. Frustrated by the events of the First Intifada
First Intifada
The First Intifada was a Palestinian uprising against the Israeli occupation of the Palestinian Territories. The uprising began in the Jabalia refugee camp and quickly spread throughout Gaza, the West Bank and East Jerusalem....
, she began her journalistic career in 1989 as a staff editor for Ha'aretz and started to report from the Palestinian territories
Palestinian territories
The Palestinian territories comprise the West Bank and the Gaza Strip. Since the Palestinian Declaration of Independence in 1988, the region is today recognized by three-quarters of the world's countries as the State of Palestine or simply Palestine, although this status is not recognized by the...
in 1991. As of 2003, she is the only Jewish Israeli journalist who has lived full-time among the Palestinians, in Gaza from 1993 and in Ramallah
Ramallah
Ramallah is a Palestinian city in the central West Bank located 10 kilometers north of Jerusalem, adjacent to al-Bireh. It currently serves as the de facto administrative capital of the Palestinian National Authority...
from 1997.

Hass was the recipient of the World Press Freedom Hero award from the International Press Institute
International Press Institute
International Press Institute is a global organisation dedicated to the promotion and protection of press freedom and the improvement of journalism practices. Founded in October 1950, the IPI has members in over 120 countries....
in 2000, the Bruno Kreisky Human Rights Award
Bruno Kreisky Award
The Bruno Kreisky Award is a biennial award created in October 1976 on the occasion of the 65th birthday of Bruno Kreisky. The laureates are rewarded for their achievements in the field of human rights...
in 2002, the UNESCO/Guillermo Cano World Press Freedom Prize
UNESCO/Guillermo Cano World Press Freedom Prize
The UNESCO/Guillermo Cano World Press Freedom Prize, created in 1997, honours a person, organization or institution that has made an outstanding contribution to the defence and/or promotion of press freedom anywhere in the world, especially when this has been achieved in the face of danger.The...
in 2003, the inaugural award from the Anna Lindh Memorial Fund
Anna Lindh Memorial Fund
The Anna Lindh Memorial Fund is a memorial fund started to commemorate the Swedish politician Anna Lindh, who was assassinated in 2003...
in 2004 and Hrant Dink
Hrant Dink
Hrant Dink or Հրանտ Դինք ) was a Turkish citizen of Armenian descent editor, journalist and columnist....
Memorial Award in 2009.

Her reporting is generally sympathetic to the Palestinian point of view and critical of Israeli government policy towards the Palestinians. During the years of the Al-Aqsa Intifada
Al-Aqsa Intifada
The Second Intifada, also known as the Al-Aqsa Intifada and the Oslo War, was the second Palestinian uprising, a period of intensified Palestinian-Israeli violence, which began in late September 2000...
, however, Hass published several highly critical articles about the chaos and disorder caused by militias associated with the Fatah
Fatah
Fataḥ is a major Palestinian political party and the largest faction of the Palestine Liberation Organization , a multi-party confederation. In Palestinian politics it is on the left-wing of the spectrum; it is mainly nationalist, although not predominantly socialist. Its official goals are found...
party of Yasser Arafat
Yasser Arafat
Mohammed Yasser Abdel Rahman Abdel Raouf Arafat al-Qudwa al-Husseini , popularly known as Yasser Arafat or by his kunya Abu Ammar , was a Palestinian leader and a Laureate of the Nobel Prize. He was Chairman of the Palestine Liberation Organization , President of the Palestinian National Authority...
and the bloody war between Palestinian factions in Nablus
Nablus
Nablus is a Palestinian city in the northern West Bank, approximately north of Jerusalem, with a population of 126,132. Located in a strategic position between Mount Ebal and Mount Gerizim, it is the capital of the Nablus Governorate and a Palestinian commercial and cultural center.Founded by the...
.

'The Palestinians, as a people, are divided into subgroups, something which is reminiscent also of South Africa under apartheid rule'

In June 2001, Judge Rachel Shalev-Gartel of the Jerusalem Magistrate's Court ruled that Hass had defamed the Jewish settler community of Beit Hadassah in Hebron
Hebron
Hebron , is located in the southern West Bank, south of Jerusalem. Nestled in the Judean Mountains, it lies 930 meters above sea level. It is the largest city in the West Bank and home to around 165,000 Palestinians, and over 500 Jewish settlers concentrated in and around the old quarter...
, and ordered her to pay 250,000 shekel
Shekel
Shekel , is any of several ancient units of weight or of currency. The first usage is from Mesopotamia around 3000 BC. Initially, it may have referred to a weight of barley...
s (about $60,000) in damages. Hass had reported Palestinian eyewitness accounts of Israeli settlers defiling the body of a Palestinian militant killed by Israeli police; the settlers argued that the event did not take place, and said that Hass reported the story with malicious intent. The Jerusalem Post asserts that Hass's story was contradicted by television reports. The presiding judge found in favour of the settlers, and said that the report damaged the community’s reputation. Ha'aretz indicated that it did not have time to arrange a defense in the case, and announced that it would appeal the decision. Hass noted that she had brought forward sourced information from the Palestinian community, and said that it was the responsibility of newspaper editors to cross-reference it with other information from the IDF
Israel Defense Forces
The Israel Defense Forces , commonly known in Israel by the Hebrew acronym Tzahal , are the military forces of the State of Israel. They consist of the ground forces, air force and navy. It is the sole military wing of the Israeli security forces, and has no civilian jurisdiction within Israel...
and the settler community.

On December 1, 2008, Hass, who had traveled to Gaza aboard a protest vessel, was arrested by Israeli police on her return to Israel for being in Gaza without a permit.

After residing in the Gaza Strip for several months, Hass was again arrested by Israeli police upon her return to Israel on May 12, 2009 "for violating a law which forbids residence in an enemy state."