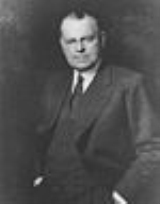 Born in Highgate Center
Highgate, Vermont
Highgate is a town in Franklin County, Vermont, United States. The population was 3,397 at the 2000 census. The town is on the border of Quebec, Canada and is a border town of Philipsburg, Quebec.-History:...
in Franklin County
Franklin County, Vermont
Franklin County is a county located in the U.S. state of Vermont. It is part of the Burlington-South Burlington, VT Metropolitan Statistical Area. As of 2010, the population was 47,746. Its shire town is the City of St. Albans.-Geography:...
, Vermont
Vermont
Vermont is a state in the New England region of the northeastern United States of America. The state ranks 43rd in land area, , and 45th in total area. Its population according to the 2010 census, 630,337, is the second smallest in the country, larger only than Wyoming. It is the only New England...
, he attended public schools, Bakersfield Academy1, and then the University of Vermont
University of Vermont
The University of Vermont comprises seven undergraduate schools, an honors college, a graduate college, and a college of medicine. The Honors College does not offer its own degrees; students in the Honors College concurrently enroll in one of the university's seven undergraduate colleges or...
, from which he graduated in 1899. He then studied law and entered practice in 1902. In 1904 he was appointed State's attorney of Franklin County, a position he held for two years.

His rising prominence led to his appointment as a trustee
Trustee
Trustee is a legal term which, in its broadest sense, can refer to any person who holds property, authority, or a position of trust or responsibility for the benefit of another...
of the University of Vermont in 1914, a position he would retain until 1941.

He also served as a special counsel for Vermont in a dispute over the exact border between Vermont and the neighboring state of New Hampshire
New Hampshire
New Hampshire is a state in the New England region of the northeastern United States of America. The state was named after the southern English county of Hampshire. It is bordered by Massachusetts to the south, Vermont to the west, Maine and the Atlantic Ocean to the east, and the Canadian...
from 1925 to 1937.

He was elected to the Senate on March 31, 1931, in a special election called upon the death of former Senator Frank L. Greene
Frank L. Greene
Frank Lester Greene was a United States Representative and Senator from Vermont. Born in St. Albans, Vermont, he attended the public schools and was employed by the Central Vermont Railway Co. in various capacities from 1883 to 1891...
, and took his seat the next day. He went on to win re-election twice (in 1934 and 1940). In the Senate, Austin championed internationalist causes—standing with President Franklin D. Roosevelt on issues such as neutrality and Lend-Lease. He resigned on August 2, 1946, near the end of his last term, in order to accept appointment as the U.S. Ambassador to the United Nations, a position he held until January 25, 1953, when he retired to Burlington
Burlington, Vermont
Burlington is the largest city in the U.S. state of Vermont and the shire town of Chittenden County. Burlington lies south of the U.S.-Canadian border and some south of Montreal....
.

He was a member of a number of organizations and societies, professional and otherwise, including the American Bar Association
American Bar Association
The American Bar Association , founded August 21, 1878, is a voluntary bar association of lawyers and law students, which is not specific to any jurisdiction in the United States. The ABA's most important stated activities are the setting of academic standards for law schools, and the formulation...
, the American Judicature Society
American Judicature Society
The American Judicature Society is an independent, nonpartisan, national organization of judges, lawyers, and interested members of the public whose mission is to improve the American justice system - to "secure and promote an independent and qualified judiciary and fair system of justice." ...
, the Loyal Legion
Military Order of the Loyal Legion of the United States
The Military Order of the Loyal Legion of the United States, also known by its acronym MOLLUS or simply as the Loyal Legion, is a United States patriotic order, organized April 15, 1865, by officers of the Army, Navy, or Marine Corps of the United States who "had aided in maintaining the honor,...
, the Society of the Cincinnati
Society of the Cincinnati
The Society of the Cincinnati is a historical organization with branches in the United States and France founded in 1783 to preserve the ideals and fellowship of the American Revolutionary War officers and to pressure the government to honor pledges it had made to officers who fought for American...
, the Freemasons, the Shriners
Shriners
The Ancient Arabic Order of the Nobles of the Mystic Shrine, also commonly known as Shriners and abbreviated A.A.O.N.M.S., established in 1870, is an appendant body to Freemasonry, based in the United States...
, the Odd Fellows
IOOF
IOOF may refer to:* IOOF , Australian financial services company* Independent Order of Odd Fellows, fraternal organization...
, the Rotary Club, and Kappa Sigma
Kappa Sigma
Kappa Sigma , commonly nicknamed Kappa Sig, is an international fraternity with currently 282 active chapters and colonies in North America. Kappa Sigma has initiated more than 240,000 men on college campuses throughout the United States and Canada. Today, the Fraternity has over 175,000 living...
. In religion he was a Congregationalist
Congregational church
Congregational churches are Protestant Christian churches practicing Congregationalist church governance, in which each congregation independently and autonomously runs its own affairs....
Christian
Christian
A Christian is a person who adheres to Christianity, an Abrahamic, monotheistic religion based on the life and teachings of Jesus of Nazareth as recorded in the Canonical gospels and the letters of the New Testament...
. Austin received an LL.D. from Bates College
Bates College
Bates College is a highly selective, private liberal arts college located in Lewiston, Maine, in the United States. and was most recently ranked 21st in the nation in the 2011 US News Best Liberal Arts Colleges rankings. The college was founded in 1855 by abolitionists...
in 1947. Austin is memorialized in a marble tablet in the Vermont State House
Vermont State House
The Vermont State House, located in Montpelier, is the state capitol of Vermont and the seat of the Vermont General Assembly. The current Greek Revival structure is the third building on the same site to be used as the State House...
's hall of Inscriptions at Montpelier, Vermont.