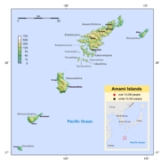 Amami Ōshima is home to several rare or endangered animals, including the Amami Rabbit
Amami Rabbit
The Amami Rabbit , or , also known as the Ryukyu Rabbit, is a primitive dark-furred rabbit which is only found in Amami Ōshima and Toku-no-Shima, two small islands in between southern Kyūshū and Okinawa in Kagoshima Prefecture in Japan...
and the Lidth's Jay
Lidth's Jay
The Lidth's Jay is a passerine bird in the family Corvidae, native to Japan. It is slightly larger than its close relative the Eurasian Jay, with a proportionately stouter bill and also a longer tail...
, both of which are now found only in Amami Ōshima and Tokunoshima
Tokunoshima
is an island in the Amami Islands of southwestern Japan. Administatively it belongs to Kagoshima Prefecture. Three towns are located on the island: Tokunoshima, Isen, and Amagi...
. The Amami rabbit is sometimes called a living fossil because it represents an ancient Asian lineage that has elsewhere disappeared.

The island is also home to the habu
Habu
' is a Japanese name used to refer to certain venomous snakes:Snakes:* The following species are found in the Ryukyu Islands of Japan:** Trimeresurus elegans, a.k.a. the Sakishima habu, found in the southern Ryukyu Islands...
, a type of venomous snake that can be found throughout the Ryūkyū Islands. Mongoose
Mongoose
Mongoose are a family of 33 living species of small carnivorans from southern Eurasia and mainland Africa. Four additional species from Madagascar in the subfamily Galidiinae, which were previously classified in this family, are also referred to as "mongooses" or "mongoose-like"...
s were brought in to kill some of the habu, as the bite from one can be fatal. As of today, the mongooses have bred with each other and are now becoming another problem. In fact, the increase in the mongoose population has been linked to the decline of the Amami rabbit and other endemic species.

Amami Ōshima is located approximately 300 km north of Okinawa Island
Okinawa Island
Okinawa Island is the largest of the Okinawa Islands and the Ryukyu Islands of Japan, and is home to Naha, the capital of Okinawa Prefecture. The island has an area of...
and 380 km south of Kyūshū. It is surrounded by the East China Sea on the west and the Pacific Ocean on the East. With an area of 712.35 km², it is the second-largest of the Ryūkyū Islands
Ryukyu Islands
The , also known as the , is a chain of islands in the western Pacific, on the eastern limit of the East China Sea and to the southwest of the island of Kyushu in Japan. From about 1829 until the mid 20th century, they were alternately called Luchu, Loochoo, or Lewchew, akin to the Mandarin...
after Okinawa Island and the seventh-largest island in Japan
Japan
Japan is an island nation in East Asia. Located in the Pacific Ocean, it lies to the east of the Sea of Japan, China, North Korea, South Korea and Russia, stretching from the Sea of Okhotsk in the north to the East China Sea and Taiwan in the south...
(excluding the disputed Kuril Islands
Kuril Islands
The Kuril Islands , in Russia's Sakhalin Oblast region, form a volcanic archipelago that stretches approximately northeast from Hokkaidō, Japan, to Kamchatka, Russia, separating the Sea of Okhotsk from the North Pacific Ocean. There are 56 islands and many more minor rocks. It consists of Greater...
).

Two dialects of the Amami language are spoken in Amami Ōshima: the Northern Ōshima dialect and the Southern Ōshima dialect. These dialects are part of the Ryukyuan languages
Ryukyuan languages
The Ryukyuan languages are spoken in the Ryukyu Islands, and make up a subgroup of the Japonic, itself controversially a subgroup of Altaic....
group. According to Ethnologue, as of 2004 there were about 10,000 speakers of the Northern Ōshima dialect and about 1,800 speakers of the Southern Ōshima dialect. These dialects are now spoken mostly by older residents of the island, while most of the younger generations are monolingual in Japanese
Japanese language
is a language spoken by over 130 million people in Japan and in Japanese emigrant communities. It is a member of the Japonic language family, which has a number of proposed relationships with other languages, none of which has gained wide acceptance among historical linguists .Japanese is an...
. The Amami language, including the Ōshima dialects, is classified as endangered
Endangered language
An endangered language is a language that is at risk of falling out of use. If it loses all its native speakers, it becomes a dead language. If eventually no one speaks the language at all it becomes an "extinct language"....
by UNESCO
UNESCO
The United Nations Educational, Scientific and Cultural Organization is a specialized agency of the United Nations...
.

The island is served by Amami Airport and Naze Port in the city of Amami.