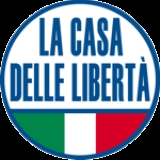 Encyclopedia
The House of Freedoms was a major Italian
Italy
Italy , officially the Italian Republic languages]] under the European Charter for Regional or Minority Languages. In each of these, Italy's official name is as follows:;;;;;;;;), is a unitary parliamentary republic in South-Central Europe. To the north it borders France, Switzerland, Austria and...
centre-right
Centre-right
The centre-right or center-right is a political term commonly used to describe or denote individuals, political parties, or organizations whose views stretch from the centre to the right on the left-right spectrum, excluding far right stances. Centre-right can also describe a coalition of centrist...
political and electoral alliance
Electoral alliance
An electoral alliance may take the form of a bipartisan electoral agreement, electoral agreement, electoral coalition or electoral bloc. It is an association of political parties or individuals which exists solely to stand in elections...
led by Silvio Berlusconi
Silvio Berlusconi
Silvio Berlusconi , also known as Il Cavaliere – from knighthood to the Order of Merit for Labour which he received in 1977 – is an Italian politician and businessman who served three terms as Prime Minister of Italy, from 1994 to 1995, 2001 to 2006, and 2008 to 2011. Berlusconi is also the...
. It was initially composed of several political parties
Political party
A political party is a political organization that typically seeks to influence government policy, usually by nominating their own candidates and trying to seat them in political office. Parties participate in electoral campaigns, educational outreach or protest actions...
:

The alliance won the 1994 Italian general election
Italian general election, 1994
An early national general election was held in Italy on March 27, 1994 to elect members of the Chamber of Deputies and the Senate. Silvio Berlusconi's centre-right alliance won handily the election for the Chamber and only narrowly lost that for the Senate....
under the name Pole of Freedoms
Pole of Freedoms
The Pole of Freedoms was a centre-right electoral alliance in Italy, launched at the 1994 general election by Silvio Berlusconi.The alliance was composed primarily of Forza Italia and the Lega Nord, but also included Christian Democratic Centre and the Union of the Centre...
, but the resulting government was short-lived, as Lega Nord withdrew their support and went to opposition. Particularly unstable had been the relationship within the federalist
Federalism
Federalism is a political concept in which a group of members are bound together by covenant with a governing representative head. The term "federalism" is also used to describe a system of the government in which sovereignty is constitutionally divided between a central governing authority and...
Lega Nord movement and the conservative
Conservatism
Conservatism is a political and social philosophy that promotes the maintenance of traditional institutions and supports, at the most, minimal and gradual change in society. Some conservatives seek to preserve things as they are, emphasizing stability and continuity, while others oppose modernism...
, pro-central government
Central government
A central government also known as a national government, union government and in federal states, the federal government, is the government at the level of the nation-state. The structure of central governments varies from institution to institution...
National Alliance
National Alliance (Italy)
National Alliance was a conservative political party in Italy.Gianfranco Fini was the leader of the party since its foundation in 1995, however he stepped down in 2008 after being elected to the nominally non-partisan post of President of the Italian Chamber of Deputies and was succeeded by...
. As such, the first Berlusconi government
Berlusconi I Cabinet
The Berlusconi I Cabinet was the cabinet of the government of Italy from 10 May 1994 to January 17, 1995.It was composed of 26 ministers and 38 under-secretaries, for a total of 64 members.Composition of the government:...
lasted only nine months.

After a five-year centre-left
Centre-left
Centre-left is a political term that describes individuals, political parties or organisations such as think tanks whose ideology lies between the centre and the left on the left-right spectrum...
government, Berlusconi managed to keep at bay some of the most uncompromising Lega Nord proposals and won the 2001 general election
Italian general election, 2001
A national general election was held in Italy on May 13, 2001 to elect members of the Chamber of Deputies and the Senate of the Republic. The 14th Parliament of the Italian republic was chosen....
, this time with a view to create a stable government. It sought to undermine the proportionality rules of the Italian Additional Member System
Additional Member System
The Additional Member System is the term used in the United Kingdom for the mixed member proportional representation voting system used in Scotland, Wales and the London Assembly....
of elections by running many of its constituency candidates under a decoy list called Abolizione Scorporo, a title which explicitly stated its opposition to the counting rules; its tactic largely worked because it had more support than the centre-left United in the Olive Tree alliance.

In 2003 House of Freedoms was routed in local elections by the Olive Tree alliance, and the League threatened to pull out of the House of Freedoms. In 2005, once again, House of Freedoms was severely routed in regional elections, losing six of eight Italian regions
Regions of Italy
The regions of Italy are the first-level administrative divisions of the state, constituting its first NUTS administrative level. There are twenty regions, of which five are constitutionally given a broader amount of autonomy granted by special statutes....
. This led to a crisis of the government, particularly after the UDC pulled its four ministers out. A few weeks later, a new government was formed on the 23 April, 2005 with the same six parties (FI, AN, LN, UDC, NPSI, PRI) and a minor Cabinet reshuffle, creating the Berlusconi III Cabinet
Berlusconi III Cabinet
The Berlusconi III Cabinet was the cabinet of the government of Italy from 23 April 2005 to 5 May 2006. It was the 58th cabinet of the Italian Republic, and the second cabinet of the XIV Legislature.Composition of the governemnt:...
.

In February 2006, two months ahead of the general elections of 2006, UDC secretary Lorenzo Cesa
Lorenzo Cesa
Lorenzo Cesa is an Italian politician, and was elected to the Italian Chamber of Deputies in the 2006 General election representing the Union of Christian and Centre Democrats...
and others protested against the inclusion of neo-fascists
Neo-Fascism
Neo-fascism is a post–World War II ideology that includes significant elements of fascism. The term neo-fascist may apply to groups that express a specific admiration for Benito Mussolini and Italian Fascism or any other fascist leader/state...
such as Adriano Tilgher, Roberto Fiore
Roberto Fiore
Roberto Fiore is an Italian nationalist politician and a founding member of the European third position movement which is against both communism and capitalism...
, Alessandra Mussolini
Alessandra Mussolini
Alessandra Mussolini is an Italian politician, the granddaughter of Benito Mussolini, and previously an actress and model...
, Gaetano Saya
Gaetano Saya
Gaetano Saya is a far right Italian politician, leader of the National Right neo-fascist party.Saya has claimed he was a former member of Gladio, NATO's stay-behind anti-Communist network during the Cold War, involved in Italy's strategy of tension during the "Years of Lead."Gaetano Saya was...
and Pino Rauti
Pino Rauti
Giuseppe Umberto "Pino" Rauti is an Italian politician who has been a leading figure on the far right for many years...
in the alliance, branding them impresentabili (unsuitable).

It appeared for some time that these neo-fascist leading figures were going to receive a few almost-guaranteed seats in the Parliament on Forza Italia's ticket, as claimed by political opposers, while Berlusconi definitely ruled out this possibility.

Eventually, Mussolini declared that neither she nor other neo-fascists would be candidates, but her alliance of neo-fascist movements, Social Alternative, would support the House of Freedoms.


Transformation into The People of Freedom party

In December 2007, Berlusconi announced a plan for the creation of a successor to the House of Freedoms, The People of Freedom
The People of Freedom
The People of Freedom is a centre-right political party in Italy. With the Democratic Party, it is one of the two major parties of the current Italian party system....
, hoping to unify much of the Italian centre-right into a single party. With the unexpected fall of the second Prodi government
Prodi II Cabinet
The Prodi II Cabinet was the cabinet of the government of Italy from 17 May 2006 to 8 May 2008, a total of 722 days, or 1 year, 11 months and 21 days...
in January 2008, the organisation of the People of Freedom was completed, but only two parties formally joined, Berlusconi's Forza Italia
Forza Italia
Forza Italia was a liberal-conservative, Christian democratic, and liberal political party in Italy, with a large social democratic minority, that was led by Silvio Berlusconi, four times Prime Minister of Italy....
and the National Alliance
National Alliance (Italy)
National Alliance was a conservative political party in Italy.Gianfranco Fini was the leader of the party since its foundation in 1995, however he stepped down in 2008 after being elected to the nominally non-partisan post of President of the Italian Chamber of Deputies and was succeeded by...
. For the 2008 general elections
Italian general election, 2008
A snap general election was held in Italy on 13 April and 14 April 2008. The election came after President Giorgio Napolitano dissolved parliament on 6 February 2008 following the defeat of the government of Prime Minister Romano Prodi in a January 2008 Senate vote, and the unsuccessful tentative...
, the People of Freedom ran as an unnamed coalition with the Lega Nord and its ally the Movement for Autonomy. Christian democrats from the House of Freedoms refused to join either the People of Freedom or its coalition, and stood independently as the Union of the Centre.


Results in the 2006 Senate election