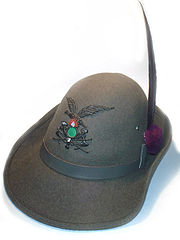 The Alpini
Alpini
The Alpini, , are the elite mountain warfare soldiers of the Italian Army. They are currently organized in two operational brigades, which are subordinated to the Alpini Corps Command. The singular is Alpino ....
are a mountain infantry corps of the Italian Army
Italian Army
The Italian Army is the ground defence force of the Italian Armed Forces. It is all-volunteer force of active-duty personnel, numbering 108,355 in 2010. Its best-known combat vehicles are the Dardo infantry fighting vehicle, the Centauro tank destroyer and the Ariete tank, and among its aircraft...
, that distinguished itself in combat during World War I
World War I
World War I , which was predominantly called the World War or the Great War from its occurrence until 1939, and the First World War or World War I thereafter, was a major war centred in Europe that began on 28 July 1914 and lasted until 11 November 1918...
and World War II
World War II
World War II, or the Second World War , was a global conflict lasting from 1939 to 1945, involving most of the world's nations—including all of the great powers—eventually forming two opposing military alliances: the Allies and the Axis...
. In addition they are also famous in Italy
Italy
Italy , officially the Italian Republic languages]] under the European Charter for Regional or Minority Languages. In each of these, Italy's official name is as follows:;;;;;;;;), is a unitary parliamentary republic in South-Central Europe. To the north it borders France, Switzerland, Austria and...
for their songs and choirs.

During this time many songs originated within the Alpini corps that tell of the hardships and brutality of this conflict. After World War I former members (called: "Veci
Veci
Veci is the nickname of the members on extended leave of the Alpini, a mountain infantry corps of the Italian Army, which distinguished itself in combat during World War I and World War II...
") founded choirs in their hometowns and offered thus the Italian people a glimpse into the hardships of the "War in Snow and Ice".

Some of the most famous and well known Alpini songs are:

An upbeat choral calling on people to open their doors and have look at a column of advancing Alpini.
This song begins by telling the difference between the single, long black feather which distinguishes the Alpini's cap from the Bersaglieri, who have a lot of smaller feathers on their cap. It goes on to tell why being an Alpino is harder than any other soldier's job, and says that the Alpini don't fear death because they die among the flowers of the Alps.
This song tells the story of a wife, who awaits the return of her husband, but is told by retreating Alpini, that her wait is in vain.
A song about a beautiful girl.
General Cadorna
Luigi Cadorna
Luigi Cadorna GCB was an ItalianField Marshal, most famous for being thechief of staff of the Italian army during the first part of World War I.-Biography:...
calls on the Alpini to advance and guard the frontier; alas they know they are on their way to guard the frontier for eternity.
A single soldier stands guard in the middle of a snowstorm on a mountain summit, dreaming of his beloved at home.
The Captain of a Company is mortally wounded and asks to see the rest of his Alpini a last time; they come, even though they have no shoes to walk. He asks them to cut his heart into five pieces: one for his homeland Italy, one for the battalion, one for his mother, one for his love and the last one for the mountains, which will surround it with roses
Rhododendron ferrugineum
Rhododendron ferrugineum is an evergreen shrub that grows just above the tree line in the Alps, Pyrenees, Jura and northern Apennines, on acid soils. It may grow up to 1 m tall and produces clusters of pinkish-red, bell-shaped flowers throughout the summer...
and flowers.
A song about the beauty of the Alps, very famous and often considered as the hymn of the Alps.
A young girl cut off her blonde hair to enlist in the army and thus able to follow her first love to the front on the Piave
Piave
Piave can refer to:* Francesco Maria Piave, Italian librettist and composer* Piave * Piave * Battle of the Piave River* 10 Motorised Division Piave An Italian division of World War II...
river.
“The railway that begins in Turin
Turin
Turin is a city and major business and cultural centre in northern Italy, capital of the Piedmont region, located mainly on the left bank of the Po River and surrounded by the Alpine arch. The population of the city proper is 909,193 while the population of the urban area is estimated by Eurostat...
, doesn’t stop in Milan
Milan
Milan is the second-largest city in Italy and the capital city of the region of Lombardy and of the province of Milan. The city proper has a population of about 1.3 million, while its urban area, roughly coinciding with its administrative province and the bordering Province of Monza and Brianza ,...
anymore, but goes directly to the Piave
Piave
Piave can refer to:* Francesco Maria Piave, Italian librettist and composer* Piave * Piave * Battle of the Piave River* 10 Motorised Division Piave An Italian division of World War II...
- cemetery of youth.
In 29 we left home, only in 7 we returned, the other 22 all died in San Dona
San Donà di Piave
San Donà di Piave or, simply, San Donà, is the largest town in Eastern Veneto and comune of province of Venice, Veneto, in the North East region of Italy.- Geography :...
.
Dear nun, I’m wounded, tomorrow I won’t see, my mother will not come; put a flower on my grave.
A cross is in Nervesa
Nervesa della Battaglia
Nervesa della Battaglia is a comune in the Province of Treviso in the Italian region Veneto, located about 45 km north of Venice and about 20 km north of Treviso....
, my brother is buried there, I wrote Ninetto on it, and so mother might find him.”
The dream of returning home.
A inspirational song about that even when alone in the mountains all of Italy stands besides the Alpini.
The Alpini arrive on the front after days of transport in railways wagons.
The wind brings the news to a family that their son has died on Mountain “Cauriol”.
The 3rd Alpini regiment is on its way to conquer Mount “Nero”, but the attacks ends in such a massacre, that the regiments Colonel
Colonel
Colonel , abbreviated Col or COL, is a military rank of a senior commissioned officer. It or a corresponding rank exists in most armies and in many air forces; the naval equivalent rank is generally "Captain". It is also used in some police forces and other paramilitary rank structures...
sits amid his dead soldiers and weeps.
A long column of Alpini is on the way to Mount “Pasubio”, a column of those that will never return, that go to die on Mount “Pasubio”. But the Alpinis are not afraid; they will not return/ turn around. (In Italian the used verb has this double meaning)
A young woman collects flowers she will bring to her love. http://www.flutetunes.com/tunes.php?id=853

A prayer for a man who died in the mountains. It prays God to let him climb the mountains of Paradise - this famous song is a recent song(1958) written by Bepi de Marzi, an italian composer who wrote many songs drawing inspiration from popular tradition.
In Friulian
Friulian language
Friulan , is a Romance language belonging to the Rhaeto-Romance family, spoken in the Friuli region of northeastern Italy. Friulan has around 800,000 speakers, the vast majority of whom also speak Italian...
dialect
Dialect
The term dialect is used in two distinct ways, even by linguists. One usage refers to a variety of a language that is a characteristic of a particular group of the language's speakers. The term is applied most often to regional speech patterns, but a dialect may also be defined by other factors,...
. A dead soldier tells his beloved where he is buried: "up among the rocks" under a plan full of Edelweiss
Edelweiss
Edelweiss , Leontopodium alpinum, is a well-known European mountain flower, belonging to the sunflower family.-Names:The common name comes from German edel, meaning "noble", and weiß "white", thus signifying "noble whiteness".The scientific name Leontopodium is a Latin adaptation of Greek...
es. He tells her to come and pick one flower, and hold it when she prays for him, so he will still be with her.

A hymn on the black feather that the Alpini carry on their hat.
On the famous "Bridge of the Alpini" in Bassano del Grappa
Bassano del Grappa
Bassano del Grappa is a city and comune in the province of Vicenza, region Veneto, in northern Italy. It bounds the communes of Cassola, Marostica, Solagna, Pove del Grappa, Romano d'Ezzelino, Campolongo sul Brenta, Conco, Rosà, Cartigliano and Nove...
the Alpini say goodbye to their loved ones, before departing to the nearby front.
On the bridge of Perati a black flag of grief flies for the Alpinis of the Alpine Division Julia
3 Alpine Division Julia
The 3rd Alpine Division Julia was a World War II light Infantry division of the Italian Army, specializing in Mountain Combat. The Alpini that formed the divisions are a highly decorated and elite mountain corps of the Italian Army comprising both infantry and artillery units...
, who goes to war, goes under the earth.
After 20 days on Mount Ortigara
Battle of Mount Ortigara
The Battle of Mount Ortigara was fought from 10 to 25 June 1917 between the Italian and Austro-Hungarian armies for possession of Mount Ortigara, in the Asiago Plateau.- Background :...
, the battalion descends and has no soldiers left; they are all in the cemetery by the river, where the battalions remaining soldiers will soon stop by too.