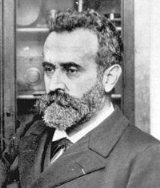 Encyclopedia
Alphonse Bertillon was a French police officer and biometrics
Biometrics
Biometrics As Jain & Ross point out, "the term biometric authentication is perhaps more appropriate than biometrics since the latter has been historically used in the field of statistics to refer to the analysis of biological data [36]" . consists of methods...
researcher who created anthropometry
Anthropometry
Anthropometry refers to the measurement of the human individual...
, an identification system based on physical measurements. Anthropometry was the first scientific system used by police to identify criminals. Before that time, criminals could only be identified based on unreliable eyewitness accounts. The method was eventually supplanted by fingerprinting, but "his other contributions like the mug shot
Mug shot
A mug shot, mugshot or booking photograph, is a photographic portrait taken after one is arrested. The purpose of the mug shot is to allow law enforcement to have a photographic record of the arrested individual to allow for identification by victims and investigators. Most mug shots are two-part,...
and the systematisation of crime-scene photography remain in place to this day."

After being expelled from the Imperial Lycée of Versaille, Bertillon drifted through a number of jobs in England and France, before being conscripted into the French army in 1875. Several years later, he was discharged from the army with no real higher education, so his father arranged for his employment in a low-level clerical job at the Prefecture of Police in Paris. Thus, Bertillon began his police career on March 15, 1879 as a department copyist
Copyist
A copyist is a person who makes written copies. In ancient times, a scrivener was also called a calligraphus . The term's modern use is almost entirely confined to music copyists, who are employed by the music industry to produce neat copies from a composer or arranger's manuscript.-Music...
.

Being an orderly man, he was dissatisfied with the ad hoc methods used to identify captured criminals who had been arrested before. This motivated his invention of anthropometrics. His road to fame was a protracted and hard one, as he was forced to do his measurements in his spare time. He used the famous La Santé Prison
La Santé Prison
La Santé Prison is a prison operated by the Ministry of Justice located in the 14th arrondissement of Paris, France. It is one of the most famous prisons in France, with both VIP and high security wings....
in Paris for his activities, facing jeers from the prison inmates as well as police officers. 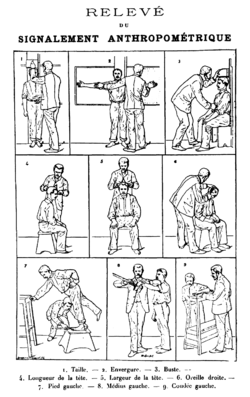 In 1882 Bertillon decided to show a criminal identification system known as anthropometry but later also known as Bertillonage in honor of its creator. In this system the person was identified by measurement of the head and body, individual markings - tattoo
Tattoo
A tattoo is made by inserting indelible ink into the dermis layer of the skin to change the pigment. Tattoos on humans are a type of body modification, and tattoos on other animals are most commonly used for identification purposes...
s, scars - and personality characteristics. The measurements were made into a formula that would apply to only one person and would not change. He used it in 1884 to identify 241 multiple offenders, and the system was quickly adopted widely by American and British police forces. Part of its benefit was that by arranging the records carefully, it would be very easy to sift through a large number of records quickly given a few measurements from the person to be identified. While it might not always give an exact match, it would allow one to narrow the pool of possible people and then to compare the person with a photograph.

The system was eventually found to be flawed, however, because often two different officers made their measurements in slightly different ways and would not obtain the same numbers. Measurements could also change as the criminal aged. It also could identify two individuals as the same person, unlike fingerprinting. Allegedly, in 1903, a man named Will West, arrested in Kansas, was found with anthropometrics to have been previously arrested, but fingerprinting—first used in 1892 to secure a conviction in the case of double-infanticide by Francisca Rojas
Francisca Rojas
Francisca Rojas is believed to be the first criminal found guilty through fingerprint evidence in the world.On June 29, 1892, 27-year-old Rojas murdered her two children in Necochea, Buenos Aires Province, in Argentina. Her six-year-old son, Ponciano Carballo Rojas, and his four-year-old sister...
in Argentina—seemed the only way to differentiate the two records.

The system was widely used by French police and in other European countries. In France it was popular enough that it was widely used even after the advent of fingerprinting. One audacious member of the Bonnot gang
Bonnot gang
The Bonnot Gang was a French criminal anarchist group that operated in France and Belgium during the Belle Époque, from 1911 to 1912...
sent police his fingerprints because he knew they did not have them, just his physical measurements.

Bertillon was a witness for the prosecution in the Dreyfus Affair
Dreyfus Affair
The Dreyfus affair was a political scandal that divided France in the 1890s and the early 1900s. It involved the conviction for treason in November 1894 of Captain Alfred Dreyfus, a young French artillery officer of Alsatian Jewish descent...
in 1894 and again in 1899. He testified as a handwriting expert and claimed that Alfred Dreyfus
Alfred Dreyfus
Alfred Dreyfus was a French artillery officer of Jewish background whose trial and conviction in 1894 on charges of treason became one of the most tense political dramas in modern French and European history...
had written the incriminating documents. However, he was not a handwriting expert, and his convoluted and flawed evidence was a significant contributing factor to one of the most infamous miscarriages of justice - the condemnation of the innocent Dreyfus - to life imprisonment on Devil's Island. Bertillon was by many accounts regarded as extremely eccentric. According to Maurice Paleologue, who observed him at the second court-martial, Bertillon was "certainly not in full possession of his faculties". Paleologue goes on to describe Bertillon's argument as "a long tissue of absurdities", and writes of "his moonstruck eyes, his sepulchral voice, the saturnine magnetism" which made him feel that he was "in the presence of a necromancer".

Bertillon also standardized the criminal mug shot and the evidence picture. He developed "metric photography", which he intended to use to reconstruct the dimensions of a particular space and the placement of objects in it. Crime scene
Crime scene
A crime scene is a location where an illegal act took place, and comprises the area from which most of the physical evidence is retrieved by trained law enforcement personnel, crime scene investigators or in rare circumstances, forensic scientists....
pictures were taken before the scene was disturbed in any way. He used mats printed with metric frames that were mounted along the side of the photographs. Photographs pictured front and side views of a particular object.

Bertillon also created many other forensics
Forensics
Forensic science is the application of a broad spectrum of sciences to answer questions of interest to a legal system. This may be in relation to a crime or a civil action...
techniques, including forensic document examination, the use of galvanoplastic compounds to preserve footprint
Footprint
Footprints are the impressions or images left behind by a person walking. Hoofprints and pawprints are those left by animals with hooves or paws rather than feet, while "shoeprints" is the specific term for prints made by shoes...
s, ballistics
Ballistics
Ballistics is the science of mechanics that deals with the flight, behavior, and effects of projectiles, especially bullets, gravity bombs, rockets, or the like; the science or art of designing and accelerating projectiles so as to achieve a desired performance.A ballistic body is a body which is...
, and the dynamometer
Dynamometer
A dynamometer or "dyno" for short, is a device for measuring force, moment of force , or power. For example, the power produced by an engine, motor or other rotating prime mover can be calculated by simultaneously measuring torque and rotational speed .A dynamometer can also be used to determine...
, used to determine the degree of force used in breaking and entering
Burglary
Burglary is a crime, the essence of which is illicit entry into a building for the purposes of committing an offense. Usually that offense will be theft, but most jurisdictions specify others which fall within the ambit of burglary...
.

Bertillon is referenced in the Sherlock Holmes
Sherlock Holmes
Sherlock Holmes is a fictional detective created by Scottish author and physician Sir Arthur Conan Doyle. The fantastic London-based "consulting detective", Holmes is famous for his astute logical reasoning, his ability to take almost any disguise, and his use of forensic science skills to solve...
story The Hound of the Baskervilles
The Hound of the Baskervilles
The Hound of the Baskervilles is the third of four crime novels by Sir Arthur Conan Doyle featuring the detective Sherlock Holmes. Originally serialised in The Strand Magazine from August 1901 to April 1902, it is set largely on Dartmoor in Devon in England's West Country and tells the story of an...
, in which one of Holmes's clients refers to Holmes as the "second highest expert in Europe" after Bertillon. Also, in The Naval Treaty, speaking of the Bertillon system of measurements Holmes himself "...expressed his enthusiastic admiration of the French savant". In the Arsène Lupin
Arsène Lupin
Arsène Lupin is a fictional character who appears in a book series of detective fiction / crime fiction novels written by French writer Maurice Leblanc, as well as a number of non-canonical sequels and numerous film, television such as Night Hood, stage play and comic book adaptations.- Overview :A...
story The Escape of Arsène Lupin by Maurice Leblanc
Maurice Leblanc
Maurice Marie Émile Leblanc was a French novelist and writer of short stories, known primarily as the creator of the fictional gentleman thief and detective Arsène Lupin, often described as a French counterpart to Arthur Conan Doyle's creation Sherlock Holmes.- Biography :Leblanc was born in...
, Lupin escapes by exploiting the same flaws in anthropometry that led to its eventual disuse. In A Surfeit of Lampreys by Ngaio Marsh
Ngaio Marsh
Dame Ngaio Marsh DBE , born Edith Ngaio Marsh, was a New Zealand crime writer and theatre director. There is some uncertainty over her birth date as her father neglected to register her birth until 1900...
Chief Inspector Roderick Alleyn
Roderick Alleyn
Roderick Alleyn is a fictional character who first appeared in 1934. He is the policeman hero of the 32 detective novels of Ngaio Marsh. Marsh and her gentleman detective belong firmly in the Golden Age of Detective Fiction, although the last Alleyn novel, Light Thickens, was published as late as...
touches on the system in Chapter 14, Part 1.

Bertillon is also referenced in the Caleb Carr
Caleb Carr
Caleb Carr is an American novelist and military historian.-Biography:A son of Lucien Carr, a former UPI editor and a key Beat generation figure, he was born in Manhattan and lived for much of his life on the Lower East Side. He attended Kenyon College and New York University, earning a B.A. in...
novel The Alienist
The Alienist
The Alienist is a crime novel by Caleb Carr first published in 1994. It takes place in New York City in 1896, and includes appearances by many famous figures of New York society in that era, including Theodore Roosevelt and J. P. Morgan. The sequel to the novel is The Angel of Darkness. The story...
. The Isaacson brothers, who are detectives, mention that they are trained in Bertillon system.